Seedling 035 is pretty close to the average result for my Schlumbergera seedlings: orange tips, light to medium pink tube, you know the drill. There are more impressive seedlings with this same basic coloration, but 035 is, you know, fine. 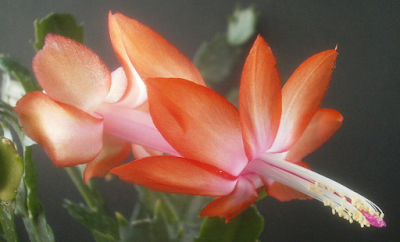 There were a ridiculous number of possible names for this one. I usually keep looking until something in my brain tells me I've got enough good possibilities to choose among, and for this one I never got that signal. Instead, I kept looking and kept looking, and when I stopped, it was because I was sick of it. So I won't list all the rejected names, just the ones that could be right for some seedling someday, but not this particular seedling. 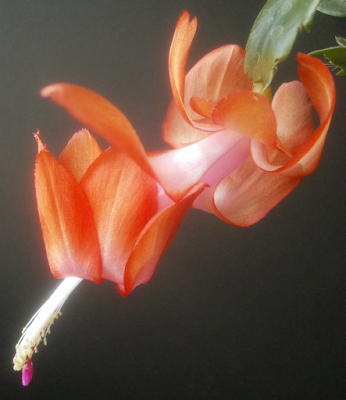 Wealthy Street sounds like someone in the grip of a vocabulary malfunction trying to say "easy street." I love vocabulary malfunctions like that,1 because if you hear the right error, it throws the idea into a whole different light. As an example, one of my two favorite moments from the current season of RuPaul's Drag Race so far was Puerto-Rican queen Kandy Ho on her way out the door following her episode-six loss: "It's a bittersweet moment, I'm not gonna lie. I would have wanted to stay longer, but I'm gonna go to Puerto Rico and rub it against other queens' faces, because I was here and you weren't." [emphasis mine]2

Pōwhiri is a Māori welcoming ceremony. It sounded like a nice name, potentially, but the pronunciation is tricky (even within New Zealand, there are apparently several ways to pronounce it), and I figured I probably also didn't understand what it was well enough to use it.

Ferris Wheel photos kept showing up (another one). There's nothing particularly ferris-wheel-like about the bloom, but I considered it anyway.

Ganesh came up again. I remain somewhat unnerved by elephants, though. Clearly I'm going to have to name one of them Ganesh sooner or later, but not this one. 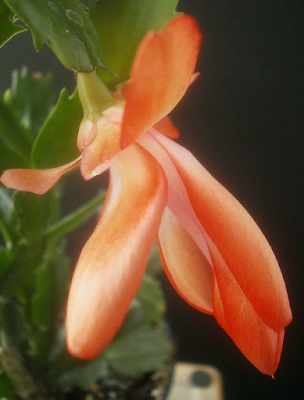 I eventually whittled the list down to three possibilities. Lawyer Shark makes sense to me in a weird way. (We already have thresher sharks, angel sharks, goblin sharks, and nurse sharks -- why not a lawyer shark?)

Patito (Spanish for "duckling") could have been the winner, except that "pato" (duck) is also an anti-gay slur in some of the Spanish-speaking world,3 and after searching the internet for a while, I couldn't figure out quite how bad it was, or how much the slur meaning colored the mundane meaning, or whether "patito" necessarily had the same connotation, so as a name, it has some problems. I don't have a problem saying something weird or vulgar with the seedling names, but I do like to at least have a clear idea what weird or vulgar thing I'm saying. 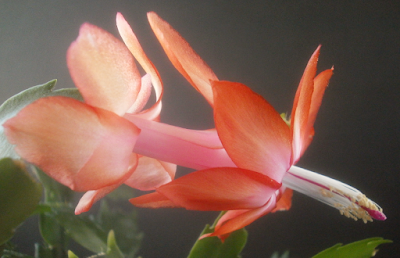 And then "Habanero Candy." Not really excited about the name, but I did at least learn a couple things: 1) there's no ñ in "habanero, and 2) inserting stuff like ñ's into foreign words to make them sound even more foreign is a thing, called a "hyperforeignism."

Originally, I was feeling drawn toward "Patito," but concerns about homophobia and upsetting Spanish-speaking gays led me to eliminate it, and I went with "Habanero Candy." Except that that didn't sit well with me over time as I thought about it, so I looked again and was considering "Lawyer Shark." Though that seemed a little too edgy, or . . . something. So I did some searching on-line for "patito," and got the impression that it probably doesn't have the same connotations as "pato." I mean, among other things, there was a Disney-esque Mexican teen telenovela with a (female) character called "Patito" for about a year, which you'd think wouldn't have happened if "Patito" had the same slur potential as "pato." And most of the other references that came up in a search4 are related to the story of the ugly duckling (El Patito Feo), so it seems safe enough. And it's what I wanted in the first place. So: "Patito."


1 Though I'm easily driven mad by eggcorns, especially "for all intensive purposes," though if you want to upset me almost any of them will do. "It's a doggy-dog world," "baited breath," "poured over the pages of the book," "listen to your conscious," and "peaked curiosity" are also all super-distracting. I think the deal is, if I hear it once, it's interesting and kind of funny; if I hear it over and over, it makes me want to smash things.
2 The other of my favorite moments from the season is the reveal of Katya's "Baberaham Lincoln" outfit in the third episode, which isn't on-topic at all, but you should still see it. And if you're not at work or easily offended, there's a video.
3 I know, right? I mean, obviously what hurts about a slur is the tone and intent behind its use, not the literal meaning, but I can think of much, much gayer-seeming birds. I mean, flamingos, hello? Yet apparently mallards, at least, are pretty damn gay. Who knew?
4 (a search undertaken through DuckDuckGo, appropriately enough)
Posted by mr_subjunctive at 3:00 AM

Annoying, those folk who do not know pique. I guess cotton piqué (pe-kay) is no longer made, wore a lot of it as a child.

What sets me off is Wahla! -- a non-word of the ignorant. Don't say it if you can't spell it. Voilà!

At some point, one of these should be named after a wiener dog. Because one can't deny that these flowers sort of look like a cross breed of a millipede and a dachshund.

Patito Guapo? Which, if it is a slur, would come out as Handsome Little Queer. Patito Bravo, Wild or Brave Little Duck. Everyone used "duck" as a term of endearment where I was brought up. It was most amusing when Angelina Jolie made it international news.

Doggy-dog world is my first encounter with that one and I do find that funny.

Flamingos, of course are as macho as can be. Flamenco is named after them. I can never help laughing when I hear the song "Yo soy flamenco" - "I am flamingo".