0335 "Donna Fanuday" has an odd thing in common with 0597 "Raven," from last Friday's post: they both produced first blooms with extremely short peduncles.1 Like Raven, Donna was less extreme about this with her second bloom, but it's still weird. (From time to time, I fantasize about having English-speaking Anthurium seedlings who I could just ask about these things: WHY DID THIS SEEM LIKE A GOOD IDEA TO YOU ANSWER ME RIGHT NOW YOUNG LADY. But you knew that.)

I really wanted to like Donna, because she's large2 and relatively unscathed by the thrips and has decent leaves, 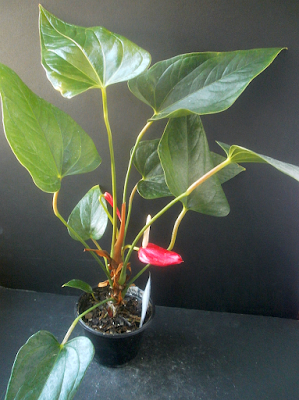 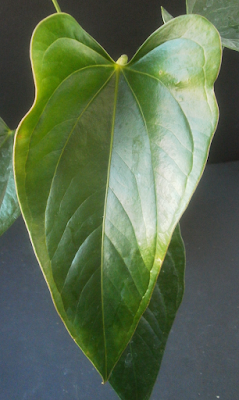 but the bloom is seriously underwhelming. Even if it weren't shorter than the leaves, it's not an interesting color (red/yellow), and the spathe is so badly reflexed that it's difficult to photograph. Here are the best pictures of the first bloom: 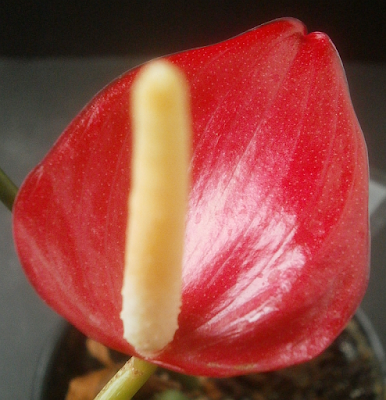 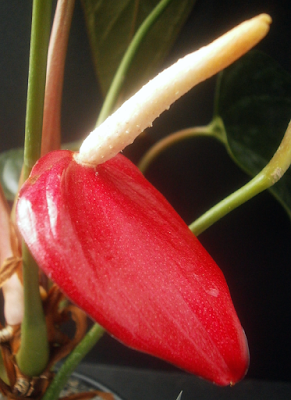 And the second, shortly after it opened, before it had had time to raise the spadix and flip back the spathe: 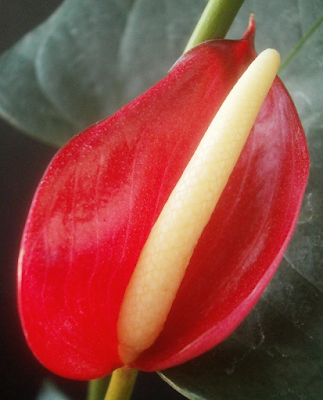 We've seen worse before, and surely will again, and I'm not willing to say that Donna is definitely, for sure, doomed to the wastebasket. But I can't say for sure that she's safe, either.

The silver lining to this sort of thing is that it's a chance to learn something about what makes Anthuriums tick. Had I stuck to the varieties available in the garden centers, I'd never have seen a plant with short peduncles; I'd never even have known that that was a possibility.3 If you really want to get to know a plant and find out what it's capable of doing, breed a few hundred of them. If you're paying attention at all, you'll see something you've never seen before.


1 Peduncle: the modified petiole that supports an Anthurium inflorescence. Or we could call it the "stalk," I guess.
2 I know small, compact plants are desirable, especially because they make it possible for me to keep more individual plants in the same amount of space, but . . . I like big leaves and I cannot lie.
3 Though I might have suspected. Of the dozen or so species genetically compatible with A. andreanum, at least two, A. kamemotoanum and A. hoffmannii, naturally produce inflorescences on very short stalks. I don't know how widespread the genes of either plant might be in modern Anthurium hybrids, though I get the impression that they're pretty well-represented.
It's not clear from reading the Anthurium-breeding book exactly what qualities A. hoffmannii might be used to impart to offspring, though it's mentioned as having contributed to the "tulip-type" hybrids, as is A. kamemotoanum. Hoffmannii also appears to be useful for producing green spathes, though A. nymphaeifolium and A. ravenii are also green, and A. formosum and A. roseospadix are sometimes very slightly green, so there are probably routes to get to a green spathe that don't involve going through Hoffmanniitown. Not that a lot of people are trying to make green-spathed Anthurium hybrids in the first place.
A. kamemotoanum is a really interesting species, and I was surprised to find that I couldn't locate a photo of it online -- the book has one photo of the blooms, plus an illustration of the whole plant on the dust jacket (low-quality image available at Amazon), and that is all. Not only is A. kamemotoanum unusual in having short peduncles, but the spathe flops over the top of the spadix a bit, giving the inflorescence something of a "hood," the two sides of the spathe are different colors (a dark red or purple-red "front," next to the spadix, and a green or green-streaked-with-red "back"), and some of the kamemotoanum hybrids shown in the book have a different color near the top of the spathe (the "acumen," if you're into terminology) than they do at the bottom. The most striking hybrid, a cross with A. lindenianum and A. kamemotoanum, is white or light pink near the base, sort of streaky pink and dark purple-red in the middle, and dark purple-red at the acumen. (It's on p. 39, for those of you following along in your own books at home.)
I don't know anything about the heritability of short peduncles, or the ancestry of my founding varieties of Anthurium, so I have no idea whether Donna's peduncles are a genetic throwback to hoffmannii, kamemotoanum, or both, but it's possible.
Posted by mr_subjunctive at 3:00 AM

This doesn't have anything to do with this post, really, it's just something that popped into my mind today, since you've been mentioning problems with thrips on the Anthuriums. I don't know if this exists in the US, but over here we have companies that breed and sell predatory mites that eat thrips, and I've had very good experiences with them on my balcony this year (first year I've tried it, first year I don't have any thrips), so maybe that's something worth looking into? It should work indoors as well.

People have suggested the idea before, and I think I even have a site bookmarked for it. (Not predatory mites alone; I've also considered ladybugs and lacewings and so forth.) I haven't done it yet because:

1) It's pretty expensive.
2) No idea if it would actually work, given the size of the collection.
3) The husband and I are both a little hesitant to deliberately bring a ton of bugs into the house, knowing that eventually they'll all die and need to be vacuumed up.

Also, now that I look again, this site says that if they're unable to find thrips to eat, they'll . . .

4) sustain themselves on pollen, which would result in me trading one problem (thrips are making my plants ugly!) for another (breeding has come to a standstill because I don't have any thrips!).

I'm still considering it, because none of the options I've been able to come up with sound especially good. Just haven't been able to push myself over the edge to making a purchase yet.

1) That it is, unfortunately.
2) There should be information for how much you'll need per square foot, so you can buy accordingly.
3) For the predatory mites, at least, that shouldn't be much of a problem, since they're tiny enough to be practically invisible.
4)I have no clue if they'd eat enough of the pollen to make a difference. I've never really paid attention to how much pollen Anthuriums have, either. (Are there any cheap flowering plants with a lot of pollen so you could put some in between the Anthuriums, to keep the mites happy? I can't think of any at the moment...)

Personally, I'm really glad I gave it a shot this year (after thinking about it for several years). I've never had a thrips-free balcony before. (Though it didn't work quite so well on the spider mites.)

Well, a lot of Anthuriums don't seem to produce any pollen at all, though I don't know whether that's because they're unable to, or they just don't see the need. (I think the female flowers are receptive first, and if they don't get pollinated, then the male flowers produce pollen. Since I usually start trying to pollinate as soon as I see female flowers, a lot of my plants never have a chance to make pollen. My guess is that I see pollen on about one seedling in four, which is about the same ratio as on the parent varieties: the NOID pink, NOID red, and 'Pandola' definitely do make pollen, and 'Gemini,' 'White Gemini,' 'Florida,' and the NOID purple definitely don't. The NOID red-purple, the NOID dark red, 'Midori,' 'Joli,' the NOID green-pink, and 'Peppermint Gemini' are suspected of not producing pollen, but I don't know for sure; I suspect that 'Krypton,' 'Orange Hot,' and 'Red Hot' do make pollen, but I don't know that for sure either.) So anything that would reduce the amount of available pollen is troubling, though not necessarily a deal-breaker.

I do have Spathiphyllum seedlings around, and most of them produce a decent amount of pollen, so I suppose I could sprinkle them around the basement, though that would get inconvenient in other ways.

Even scaling it down to where I'm just hitting the minimum (100 mites/plant) and figuring ten plants equal one "plant," that's still $40+shipping, every two or three weeks. Doable, barely, but if any thrips make it out of the basement (which has likely happened already), it would only fix the problem temporarily.

I suppose I could try buying the smallest possible number and using them only on one section of the basement, and see if that makes any difference. It would at least tell me whether there was any point to buying more.

I decided to go ahead and buy some this morning, from a different site (greenmethods.com). It's been sort of exasperating so far, and as of right now, I have not yet successfully placed an order, but the intent is there.

I meant to reply earlier, but life got too busy.

What I wanted to say is to take the every 2-3 weeks, as they usually recommend, with a grain of salt. What I'd do (and what I'm doing with my balcony) is watch if there's an improvement, if they work at all, and if they do, watch for a return of the thrips, and then order more more when you need them. Mine are still doing a good job, and I hope they'll last me to the end of the gardening season.