This post took a while to shape into something I would have considered posting, and then on Sunday I decided I didn't like it. So I started it over from scratch, which means that all kinds of things have happened between this post and the one I posted on Wednesday.

All this was necessary because I'd run out of room, and there was no more floor space to take over, so the only direction I could expand was up. And the only place I could actually expand upwards was at one end of the shelves -- everywhere in the basement there were 6-foot-tall shelves except for some 4-footers at one end. So I bought a new 6-foot shelf set, which I swapped in for the four-foot shelves, and I got a few cubic feet near the ceiling. And I took the opportunity to adjust the shelf heights, so the plants don't have to burn themselves on the fluorescent bulbs anymore and everything has enough space to grow a little.

Things aren't entirely settled yet; I still need to hang a light from the ceiling in one spot, and I'd really like to find an alternate location for some non-Anthurium plants, because I'd overlooked them in the original planning and so now they're in empty shelves I'd intended to use for Anthurium expansion, but I guess things are okay for the moment. Certainly the framework is in place, and I can tweak stuff later as the opportunities present themselves.3

I wasn't expecting 0328 "Polly Esther Blend" to turn out like she did. Polly has two siblings who had bloomed before her: 0329 "Gladys Panzarov," which is an intense, saturated orange with a beige spadix, and 0330 "Faye Quinette," which is complicated, but sort of a light red-orange / beige.4 What I got from Polly instead was light pink / beige, which is the first time I've seen that particular color combination. 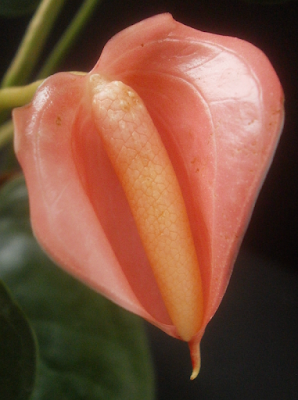 Seeing Polly, Gladys, and Faye side-by-side, you wouldn't think that they were particularly closely related.5

Top to bottom: 0328 "Polly Esther Blend," 0329 "Gladys Panzarov," 0330 "Faye Quinette." I suppose you could argue that they look sort of related, insofar as they're all at least slightly orange with beige-ish spadices, and neither Polly nor Faye are very dark. But "I guess they could maybe be related" is not the same thing as "OMG those are definitely related," as is the case with some of the other sibling groups.
The strongest resemblances Polly has to her sisters are in the size of her spathes (small side of normal, like Gladys) and her leaves, which are basically identical to Gladys's: 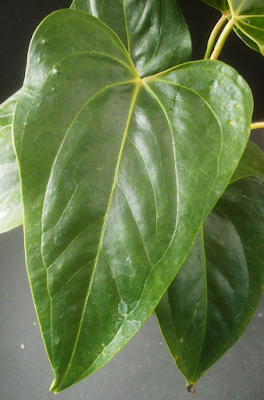 As she aged, Polly's spadix lost whatever yellow tint it started out with, and the spathe went from an ambiguous light orange-pink to a less interesting light pink. 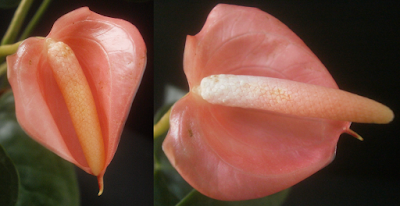 Left: August 1. Right: August 11.
So that's a little disappointing. Polly is also shorter than her siblings, which is odd but not necessarily bad. 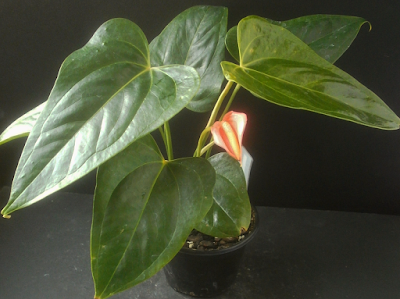 I'm not sure what kind of breeding potential there might be from Polly (do I really want to tempt the gods to send me more pink Anthuriums?), but I like her, and I intend to keep her. We'll see how things go.


1 There was also a temporary side benefit, in that our downstairs toilet has never looked lovelier: 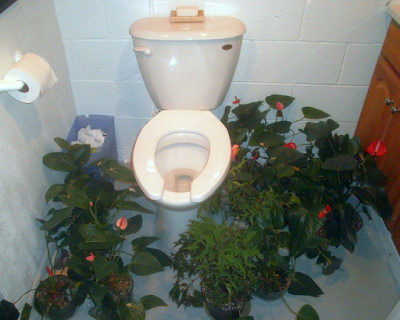 I mean, we couldn't use it, but it was pretty. For a toilet. The photo really doesn't do it justice.
And why were there Anthuriums around the toilet? Well, I had something like 120 square feet of plants to put somewhere while I got the shelves together, and the basement only had just so much free space, so plants wound up everywhere. Around the toilet, in the shower, on the futon, under the stationary bike, on the coffee table, under the coffee table, etc.
2 In fairness, almost all of the shelf- and light-cleaning was taken on by the husband, who had better things to do with his time but did this for me anyway.
3 Also, I apologize for the lack of photos of the process. I did take pictures here and there as we went along, but I didn't take a "before" picture to compare to, which was a mistake, and the pictures I did get mostly didn't turn out well and more or less fail to illustrate what happened.
4 I keep meaning to do a follow-up blog post about Faye, but the new seedlings keep taking all my attention. So maybe I should just talk about her here, since I brought her up.
Faye's got two blooms on her at once now, and the most amazing thing is that they both have these psychedelic, unphotographable backs, sort of brownish-orange with bright green veins. The front is a lighter and redder orange that fades to a light orange, which would be noteworthy all by itself, but the backs of the spathes make Faye really remarkable. My camera isn't up to the challenge, but here's the closest I've gotten so far: 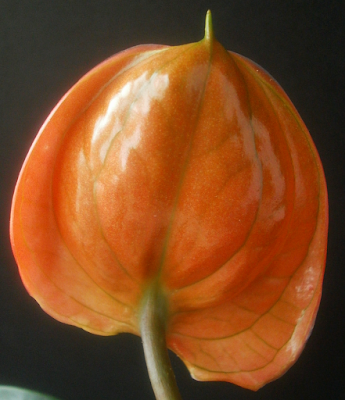 In person, the contrast is much sharper and stronger, and the green is a lot more vivid. I'll keep trying to get a good picture, but don't hold your breath.
Faye has had problems off and on with scale, and I've recently started seeing thrips as well, though her leaves are broad and sturdy and so relatively easy to wipe off, so I'm not especially worried about the scale yet. It's not clear whether the thrips will actually become a problem or not.
5 There's a fourth sibling from the AX group (seed parent: NOID red; sow date: 9 November 2012), 0331 "Elvis Herselvis," but so far Elvis takes strongly after her mother. It looks like she's going to be a dark red, probably with either a green or white spadix, but she's developing very slowly so it might be a while before I can confirm this. In any case, it doesn't look like Elvis will look any more related to Polly, Gladys, or Faye than they do to one another.
Posted by mr_subjunctive at 3:00 AM

That has to be one of the best toilet pictures I've ever seen ;)

Second best toilet picture for me.