I was so excited about Tricia. And then she opened her spathe, and . . . I was so disappointed with Tricia. 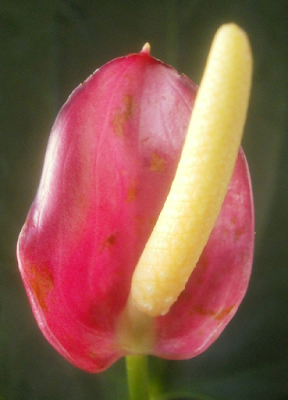 The color's good. That's what I was excited about. And the outside of the bud looked very clean and unscarred, so I figured the thrips were leaving her more or less alone. But they were not. 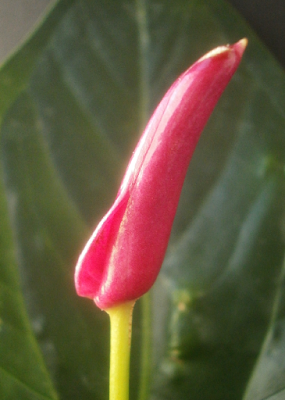 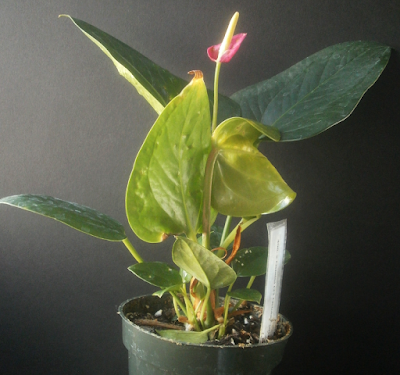 There are some connections between them, the main one being that Ida, Amber, Tricia, and Tex were all potted up around the same time, and live near one another, in a group of four flats with particularly bad thrips problems. An environmental influence (like, I don't know, colder temperatures, or drier air) that caused one to produce small blooms would likely affect the others as well. Genetics may play a role as well; about 70% of the seedlings on those flats are from seedling groups BF or BH (including Ida, Amber, Tricia, and Tex). Nothing ties all seven together, though. Maybe it's coincidence. Maybe they all had the same terrible pollen parent. Maybe the thrips are doing something.1 Maybe I'm drawing connections where there aren't any and Tricia's not actually that bad. Certainly I've seen leaves this bad and worse on most of the other six plants: 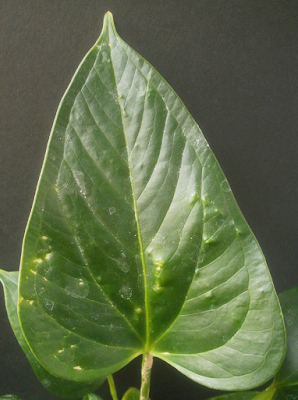 Note: the dust on the leaf is just vermiculite powder from the predatory mites, not a raging spider mite infestation.
So I'm not sure what to do with Tricia. The colors are nice, but not unique.2 Thrips scarring on leaves is something I've seen seedlings more or less grow out of before, and it's not that bad to begin with, but bloom size changes a lot less: if she's producing tiny blooms now, there's a good chance she'll produce tiny (or at least small) blooms forever. So Tricia's fate is, for now, up in the air, though I lean slightly toward throwing her out. We'll see.


1 Q: What "something" could the thrips be doing, Mr. S.?
A: Oh, you know. Shooting the plants up with heroin. Witchcraft (?). Predatory lending. That kind of thing.
2 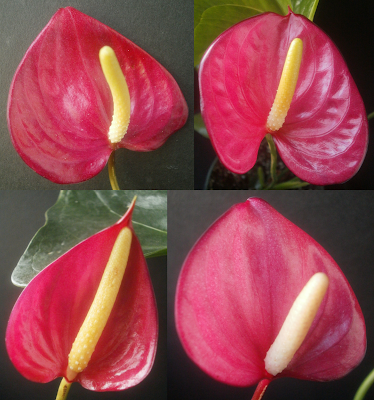 I don't know about thrips but spider mites have caused my tulip type anthuriums to produce smaller (and occasionally strangely petiole-free) blooms.