Landon's an improvement on 0537 Bridgette of Madison County, though just barely. Tough to get excited about, unless you're a fan of tiny inflorescences in colors you've seen a thousand times before, in which case he's amazing. 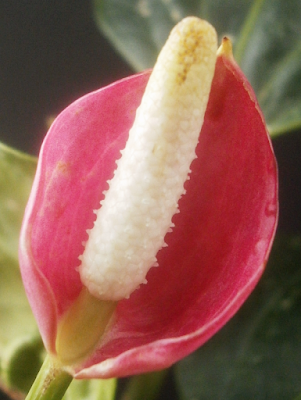 The newer leaves are pretty good, 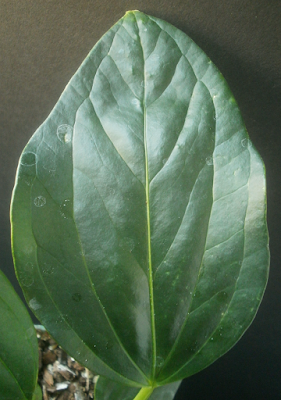 and they've always been at least okay, 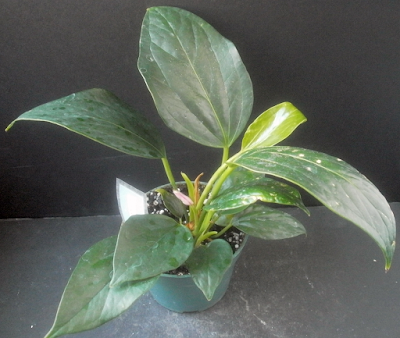 though I'm not sure what's going on with the spotty leaves in that last photo (especially the one pointing to the top left corner). The slightly blue-gray cast to the leaves is the normal wax they produce,1 but I don't know why there should be any spots where the wax is missing. I mean, sometimes I rub the wax off in the process of checking to see whether a bump is scale or not, but I'd never make such neat, small, spots by doing that. They could also be drops of something oily from above, but I can't come up with anything that might plausibly be dripping.

If nothing else, the Anthurium seedlings are an endless source of mystery. Fairly boring mystery, but still mystery. 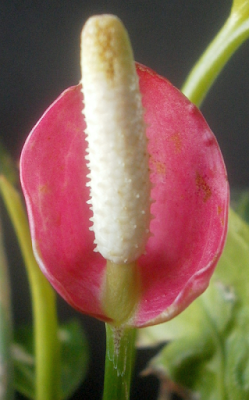 Landon's not a keeper, but since he's not harboring obvious colonies of scale or thrips, he'll probably get to stay for a while.


1 Like every other characteristic, leaf wax production varies from seedling to seedling, though it shows up so much better on darker leaves that it's tough to get much of a feel for how common it might be. It also changes sometimes, in that plants which hadn't previously been very waxy sometimes suddenly start making a lot, but I don't have any evidence to suggest why. I have theories, but haven't put much energy into investigating them, because the only way wax production matters to me at this point is that high-wax leaves are much tougher to photograph.
Posted by mr_subjunctive at 3:00 AM