It sort of feels like I'm in some nightmare hell version of $25,000 Pyramid, and the category is "things that are orange," and my partner is just not getting it. 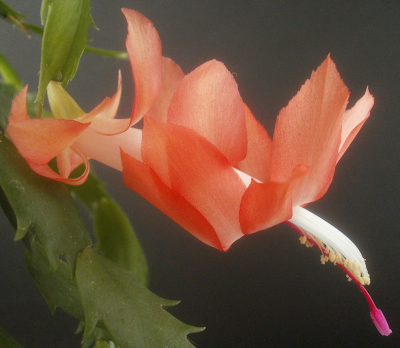 Nothing against the flower itself, which is lovely, as almost all of them have been lovely.

So what've we got for name options? Too many. Came up with 27 from the emergency names list,1 and cut it down to 5 by limiting myself to specific categories. I told myself I could have one shape-related name, one previously-considered name, one color-related name, one pop-cultural,2 and one whatever. Arbitrary, sure, but no more than anything else I've done with the names.

So for shape-related, I'm picking Talaria, the name for the winged sandals worn by the Greek god Hermes.3

Previously-considered: Svarog, who might be the name of a Slavic sun/blacksmithing/fire deity. (Previously considered for 056A Demons Begone.)

Pop-cultural: Chell, the player character in the Portal games, which is relevant because the Portal games are awesome4 and because Chell wears an orange jumpsuit in them.

Whatever: Ad Abundantiam, another Latin legal term. Legally, it's used in a situation where ample evidence has already been presented to make whatever point you're making, but you want to add even more evidence. Outside of legal circles, it's used in the sense of "and as if this wasn't enough." 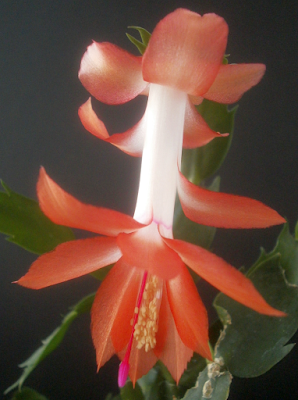 So, wow. Those are all pretty good, actually. Hmm.

I liked finding out that Hermes' sandals have a special name, but there's no compelling reason to use Talaria for this particular seedling. It would fit about 95% of all the seedlings equally well, after all.

Which leaves Svarog, Kimchi, and Chell. All very short, which is good; all non-English, or at least unusual English;6 all appropriate in one way or another. But I still have to pick one. So.

Gonna throw out Kimchi, on the grounds that image searches make it look like it's more commonly red-orange than orange-orange, like the flower.7 There'll be red-orange seedlings in the future, I'm sure of it. 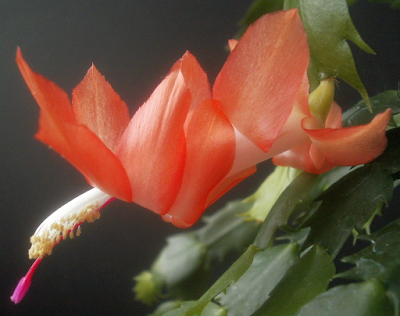 And if I'm getting super-nitpicky with the colors, then, it probably has to be Chell. I mean, we have an orange / white seedling; Chell is usually depicted in a white tank top, with an orange jumpsuit, like so: 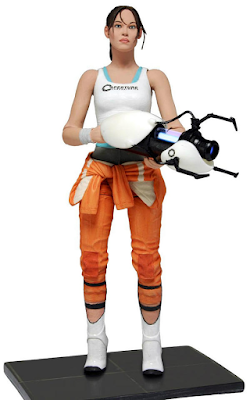 (Source)
Which would be awfully tidy. Svarog could, in theory, be any color from the warm side of the spectrum and would fit just as well, plus I was kind of hoping to use it for a seedling a little more jagged in shape, like 056A Demons Begone.8 So I think I'm going to go with Chell.


1 I can't imagine we're going to go back to TinEye until next year, unless something non-orange happens. Even then, I'm not sure TinEye would be worth the effort.
2 Lots of pop-culture names on the list for this one. [shrug]
3 Or Mercury, if you prefer the Roman names.
4 No, seriously. You'd like them. I swear.
5 Which reminds me: is there a prohibition on using Latin names for cultivars, considering that species and genus names are often also Latin and maybe people could get confused about what's a species and what isn't? It seems like maybe that sort of thing should at least be discouraged, if not outright prohibited. Though as we've seen, what ought to be, and what actually is, are two very different things sometimes when it comes to cultivar names.
6 Arguably kimchi has been absorbed into English by now. I mean, I'd heard of it before and knew more or less what it was, and Iowa's not very in the loop on such things.
Chell isn't standard English, but as far as I know it's not standard anything. (I'm not even sure that the name is ever directly stated in either game, even. Though you do see it written out once in Portal 2.)
7 Actually, it looks more like kimchi can be pretty much any color in the red-to-green color spectrum, but the most common / familiar version is reddish-orange.
8 In retrospect, it's a shame that I didn't use Svarog for 066A Coquette. 066A's first bloom was reddish and more or less normal in shape, but the second bloom was stranger and spikier.
Posted by mr_subjunctive at 3:00 AM

The aptly named "Stoked" has another bud! Nearly three months after its previous flower. I admire its enthusiasm, especially given that it's such a small plant.

Considering there are three different varieties (grices, was it?) of Paphiopedilum all called gloriosum I think the stable door probably won't get shut now.

Not tried kimchi? Find a Korean grocer (can't be more than a few hundred miles away) and get some fresh stuff. If you like chili it is a really nice way to eat it. Quite compulsive, the fermentation seems to add something really special to the spice.

Chell (or Shell or Chelle) is pretty common as an affectionate diminutive for Michelle in the UK.

I believe I've read that Latin variety names aren't allowed any more, but I'm not sure if that just applies to "descriptive" names like "Alba" or "Variegatum", or if it would include phrases like "Ad Abundantium" as well. (I can't remember where I read about it - probably in the one book I have at work and couldn't check now anyway. And Google is not helpful, it just keeps giving me stuff about Latin species names rather than varieties.)

Here are the Rules for cultivar names http://www.ishs.org/sci/icraname.htm Cultivars are registered under the aegis of The International Code of Nomenclature for Cultivated Plants. Latin IS generally frowned upon, although there are some exceptions.

Given my interests in C&S, the exception usage I see most often is the one used to keep now submerged species names accessible in cultivated plants. An example of this is the former species Gasteria caespitosa, I have old legacy plants labelled with this in my collection, but I also have plants of the species Gasteria bicolor which has subsumed G. caespitosa. It is considered allowable, under the naming codes, to call my G. caespitosa plants Gasteria bicolor 'Caespitosa' - the consideration being that the plants available under this name have been in cultivation so long that they are effectively a vegitatively propagated cultivar rather than a random sample from the wild species.