Another seedling, another 'Gemini' look-alike. 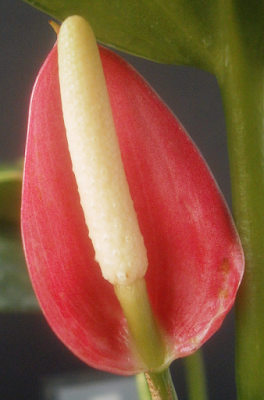 The leaves aren't so hot either, though I'm a little bit curious about their shape. A few seedlings have had convex, dome-like leaves like this. In some cases, this was caused by insect damage distorting the leaf's development, but occasionally I run into a seedling that does this whether it has bug problems or not. I don't like it (it makes it harder for me to blast thrips off a plant if the sprayer can't reach the undersides of the leaves, which may partly explain why Tilda seems to have more thrips damage than her neighbors), but it's something slightly outside the norm. 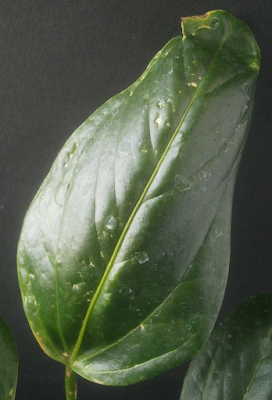 In any case, Tilda isn't a great seedling. Probably gone in the next purge. 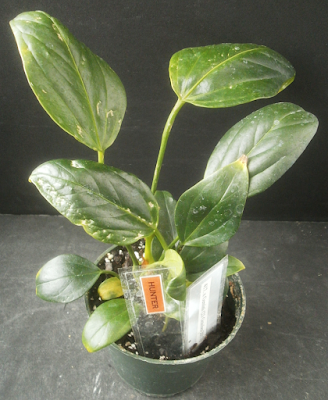 Also, I said a while ago that I would show you what my first Araucaria bidwillii was looking like these days, once it was warm enough to take the plant outside for photos. I did the photo-taking part and then got distracted before I could do the showing-you part.1 But here it is as of April 2016: 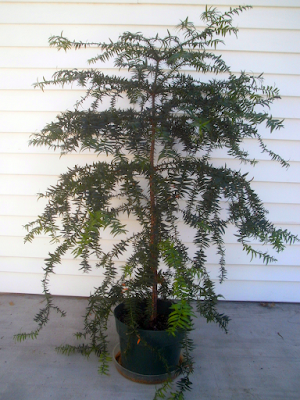 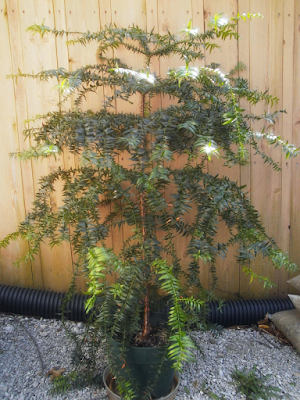 I've photographed it in a way that hides the problem, but it does have one notable flaw: when I repotted it, several years ago, it just refused to sit in the new pot vertically. I'd get it planted perfectly vertically, and pack the soil in around it, and then after a couple of waterings it would list ever-so-slightly to one side, or would actually fall all the way over (it was outside that summer, so sometimes there was wind). We did this three or four times before I gave up and told it, fine, grow however you want. So now there's a permanent 172-degree angle in the stem, at the second-highest tier of branches. It doesn't really affect the health of the plant,2 and I still love the species, but it does make me a little embarrassed to show it to people.


1 (I only remembered it now because the Anthurium posts are getting a little repetitive for me too, and I was trying to think of something else I could add to this post to make it more worth reading. The intent is to throw a non-Anthurium into all the Anthurium seedling posts until I run out of material, but I'm essentially asking myself to write two blog posts per post, so I probably won't be able to keep that up for very long.)
2 It might someday, if the weight of the vertical growth above the kink put pressure on the slightly non-vertical trunk. However, the plant's never going to be able to grow any taller than our tallest ceiling, and even that will take another decade or two, so I don't see this becoming an actual problem.
Posted by mr_subjunctive at 3:00 AM

Perhaps a largish rock or tying it would have solved the problem? (If you normally summer it by that fence or something similar, I would have used rope/twine and tied it to the fence or ground stakes. By the end of summer, after roots had a chance to reestablish, it's possible it would remain vertical. Btw, if using the fence, rather than tying it flush to the fence, would have done a V- formation with the plant at point.)

I think I did try a rock at some point, but didn't have rocks of the right size, or the pot kept blowing over anyway, or something like that. It wouldn't have occurred to me to tie the plant to something, so I'll keep that idea in mind for the next time the situation comes up.