I've talked previously about how we got our poinsettias in two different batches; the majority came from a company in Pella (IA) that appears to be a major greenhouse supplier in the area, and then we had a second batch, about 1/3 the size of the first, from a different grower in Centerville.

Along with the Centerville plants came whiteflies. A few of the Pella plants may also have had a whitefly or two on them, and we'd had some in the greenhouse already, that came in with some of the things that had been outside, but we'd undertaken a pretty serious effort to get rid of the stuff that came in from outside (nearly killing a few Hibiscus in the process, though they did all survive in the end), so: one, it was frustrating as hell to be bringing in new whiteflies and unable to stop them, and two, I'm pretty sure Centerville is responsible.

This is what they look like: this one is photographed on the back of a poinsettia (Euphorbia pulcherrima) leaf. The picture, if you open it in a new window, shows considerably more detail than I've ever been able to see with just my eye; normally I just see a tiny white rectangular shape and start leaping to conclusions. 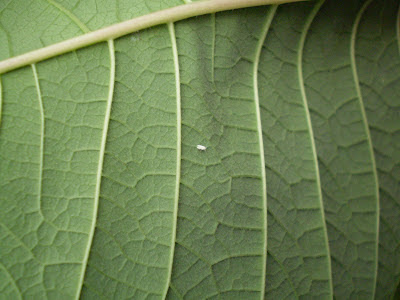 Now for a confession: whiteflies scare the crap out of me, more so than any other bug, even though they're not necessarily as damaging or as difficult to get rid of as some other bugs.1 I had a small invasion of whitefly in late winter this year, brought in on a plant that was huge, and beautiful, and (most importantly) free, which meant I didn't inspect it as closely as I might have. (UPDATE: I have since determined that the bugs in question were not whitefly, but were some other, as yet unidentified, thing that has a particularly strong affinity for Sansevierias.) 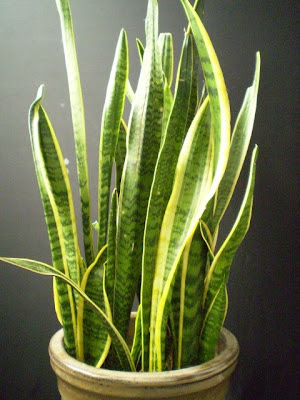 (The trojan Sansevieria.)
The infestation never got as bad as it could have, because I went into full alert mode and started hosing down all the plants with rubbing alcohol2, and I hand-defoliated a few to remove pupae. Eventually the crisis passed. But whiteflies still freak me out, because unlike spider mites or mealybugs, they fly.

Happily, my observations at work have shown me that they're not that mobile. In theory, yes, they could fly around your home, laying eggs on every plant as they go, but they're not that ambitious, and flying seems to tire them out quickly: the ones at work rarely spend more than two seconds in the air at a time. In fact, if you turn a leaf upside down and find one there, it will probably be too lazy to fly away,3 which is how I managed the photo above.

They also have strong preferences for which plants they like and don't like. Hibiscus is a big favorite, as are poinsettias. We've also seen a lot of them on sweet potato vines (Ipomoea batatas), various herbs (don't recall which ones specifically) and ornamental kale (Brassica oleracea). My own infestation centered mainly on two plants: the Sansevieria they arrived on and a couple Euphorbia trigona that they enjoyed laying eggs on.

Supposedly the favorite color of the whitefly is yellow. I don't know about this personally. In my experience with the (white, yellow, green or red) poinsettias, eggs and adult flies are usually on the underside of the green leaves. If disturbed, they do often settle back down on a yellow or pale green leaf or bract, but I think that's because the points are just starting to bloom, so yellow and pale green are the colors of the topmost leaves/bracts, and the whiteflies are just trying to land as soon as they can. So I'm not convinced. They don't go out of their way to land on the yellow sticky traps we've got laying around for them.

As far as whitefly control goes, the most effective by far seems to be Marathon (imidacloprid), which the Pella group of plants had already gotten before they came to us, and which we've added to the Centerville batch but probably too late. Imidacloprid is a derivative of nicotine which can be absorbed by a plant's roots and taken into its tissues, effectively poisoning all parts of the plant (this type of insecticide is called a systemic insecticide). It comes with its own problems,4 but it does seem to work. The alternative, walking among the points, turning over leaves, and squishing flies with my fingers, is also effective, more entertaining, and less likely to result in pests becoming resistant, but it's also much slower and doesn't affect eggs, larvae or pupae.

Imidacloprid is approved for indoor amateur use (and it's also in a lot of treatments for fleas on cats and dogs), usually as a spray. We sell a few different formulations of it at work. Yellow sticky traps might also be helpful in small infestations, if you can place them close to the affected plants without actually touching the affected plants, though I'm skeptical, as I've indicated. Yellow sticky traps do have going for them that they're not toxic (at least, not if used as directed - I wouldn't lick one). But, as with all pests, the better approach is to not get them in the first place. Check your plants before you buy.

Photo credit: me.
1 (If I were more rational, I would be more alarmed by mealybugs.)
2 Exaggerated for comic effect. Do not use hoses to apply rubbing alcohol to your own plants.
3 (I sort of imagine that the one in the picture is looking back at me with an annoyed expression on its face, saying something like, "Do you mind?")
4 It could be responsible for some or all of the recent decline in honeybee populations. Though the jury is still very much out on that, and there seem to be as many theories about the bees as there are people looking into the situation.
Posted by mr_subjunctive at 4:55 AM

I'd have to say thrips give me nightmares more than any other bug.