This plant and I have had a long, torturous, and somewhat mutually abusive history together, but after a year of that, it looks like maybe things are finally turning around again. The short version of the story is that when I bought the plant, it was in very wet, heavy soil, which had already started to rot out the roots. When I eventually clued in to the fact that the reason it wasn't growing well was because its roots were rotting out, I cut off the tops of the stalks and tried to root them in water.

Rooting in water worked, but then when I transferred them to soil, I put them in pots that were too big, and soil that was too heavy, and began the whole rotting out process again, because I am stupid, or excessively optimistic, or both.

The roots, meanwhile, got potted back up in their original container, with lighter, better soil, and then did absolutely nothing for a very long time. I actually thought I'd probably killed them, but again -- optimistic and stupid. 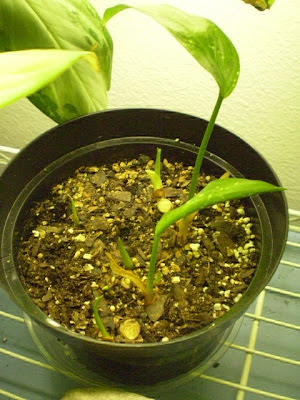 The roots started to resprout a couple months ago, but only in the last little while have new shoots started to come up all over the pot (the above picture is slightly dated; there are ten growing tips currently going, instead of the six or seven you can see above). I don't know if I'm likely to get a plant that's as full as the original one, but at this point, it's been a year and a few weeks of watching it go steadily downhill, so I'm not going to complain, whatever I get. The tops did eventually get rooted okay in 4-inch pots, and while they're not amazing, they're alive: 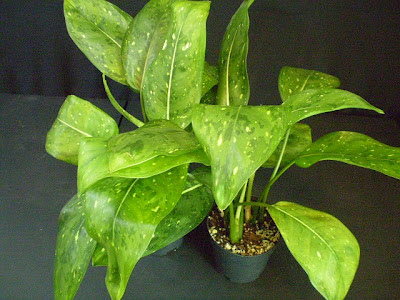 I like rescuing the occasional rescue plant from Lowe's or wherever, but it's not very often that I rescue a plant from myself.

Posted by mr_subjunctive at 4:15 AM

Good Luck, and kudos for hanging in there so long, I would have given up months ago. Space is at a premium in my house, so my plants better thrive or die.....lol. In the summer, if I don't like a particular plant, I put it outside, if it makes it through the summer, it comes back in. If not, Buh Bye.

That's a really nice looking plant, so I guess it's worth the added effort. I personally love, love, love Aglaonemas, and tend to give them a little extra TLC. I just wish we had more types available locally...sigh...

That is a particularly lovely ag, certainly one worth rescuing. I used to try to rescue them, but I also have space issues, so I now I rarely bother.

I've never had a root-rotted one grow back in full and lush. I have done cuttings and crammed a bazillion of them in a pot and made a nice looking plant, however.

My Ags have never let me give up on them. I had a Silver Queen "stick" (I forget why, leggy maybe? Cut the top off?) which for some reason I kept watering for well over a year before it showed a leaf beginning. I can't tell you how many times I made up my mind to throw it out and then, inexplicably, decided not to.
My favorite story, though, is the Tale of 2 Marias. One was a rescue from an account when I worked with an interior landscaping company. It had scale and mites, but recovered quickly with care. The other was a slip taken from a wedding gift given to a peer of my grandmother's in the early 1900's. It has been in my family ever since, flowering and fruiting like mad. The rescued Maria never flowered nor bore fruit for the first 13 years I had it, then I happened to put the 2 Marias side by side on a window seat. Two years later they are both fruiting and flowering.
Did the old one show the new one how? Did they share material in some fashion? I have my pet theory, but the fact is that even though they are no longer together, they are both now fecund...