If you haven't visited the site Superdickery, you've been missing out. It's a simple site, with a simple thesis: that Superman is a dick, which its owner tries to prove by presenting example after example of Superman acting like a dick. And there are more of those than you would think.

Plant-related pictures on the site are kind of few and far between, but there are these two: 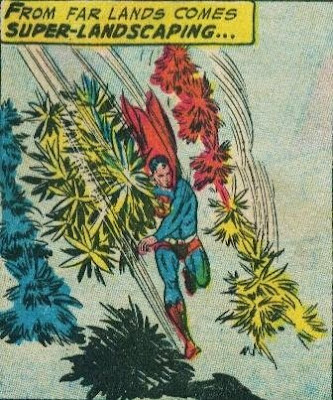 I'm not sure this counts as landscaping exactly. I mean, it looks to me like he's just kind of firing the plants into the soil, which has got to be rough on the roots. And even if his aim is good, there's going to be leaves breaking off that'll have to be super-raked up. Or super-composted. 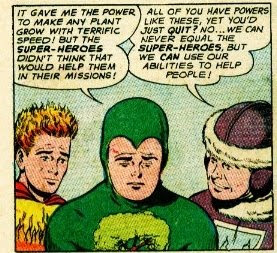 I don't know who any of these guys are, or what happened to them, but I think purple-parka-helmet guy overstates the case a little. In what situations would the ability to make plants grow really fast save somebody's life? Maybe if there was a nuclear bomb about to be launched by some guy, and you made the bindweed in the area grow really quickly into the chamber that sets the bomb off, such that the bomb couldn't go off, then that would be superheroey. But that's kind of a stretch. I mean, on a day-to-day level, I guess being able to deflect bullets with your chest isn't terribly useful either, but boy, on those days you need it, it's really handy.

Granted that he doesn't say "save lives," he says "help people." But to me, the most obvious "help" in that case would be economic: okay, Captain Tree-Guy, you just sit over there in the corner and make the plants grow really fast, and then we'll sell them. Which is mainly only helpful for whoever owns the business in question. Perhaps I'm not being imaginative enough. Maybe this is best left as an exercise for the reader:

Assignment: Write a comic book plot in which the ability to make plants grow really fast would help people in ways which aren't strictly economic. Plot must contain at least one supervillain, one fist-fight, and one brief allusion to some sort of phlebotinum. (Warning: Link goes to tvtropes.org, which is known to have led to many wasted afternoons.) Bonus points will be awarded for plots in which the ability to grow plants fast actually saves a life.

My standard answer to the what-superpower-would-you-want-if-you-could-have-a-superpower question is, I would want total control over the weak nuclear force. Electricity's been done. Gravity (or at least flying) has been done. Magnetism has been done. Even freezing time, running time backwards, whatever: yawn city. But the weak nuclear force? Nobody even knows what it is, aside from a few physicist types. I could make things that aren't radioactive be radioactive, I could make stuff that is radioactive not be, I could possibly stop the sun from burning, change neutrons into protons (which I think gives me the power to turn tungsten to gold, and turn gold to mercury, as a side effect), perform cold fusion at will, and all kinds of cool shit that I'm just positive would be useful eventually. At the very least, being able to stop the sun from burning and control the world's gold supply would make me an awfully effective supervillain, and being a supervillain has always sounded like something I'd find fulfilling. (I've just had trouble finding funding. You know how it is.)

LOL...you write like a dream! I will be thinking on this all day, if not week or month!!!

Well, I don't know about a supervillan, but I think the ability to grow food for the starving millions would constitute a hero. :)

It'd still be difficult to base a comic book series on, though. I picture more scenes with people talking about fuel prices and distribution networks, and not so much scenes with armies of trained robotic monkeys. You know what I mean?

I agree it probably won't make the most exciting comic.

A super-hero that can make plants grow fast, I like it. It would be even better if the super-hero could somehow speed grow plants that could not only be used as food, but also birth control. Eh, whadya think? (does "whadya" have 1 or 2 'd's?). Then s/he'd been saving people and perhaps the planet at the same time!
Or how about someone is trapped in a burning apartment and the fire fighters can't get a ladder up there soon enough to save her/him, but PlantMan shows up and goes up onto the roof which happens to have a rooftop garden, and he makes the ivies grown long and thick enough for the trapped person to climb down? Or he makes the grass below grow lush and thick so the person can jump without getting hurt?
I've got a million of 'em.
Love your blog. It's because of you that I now know that my "torch cactus" is in fact not a cactus at all but a euphorbia trigonia. Thanks.

This is the most fan-freakingly-tastic post I've read this year. You were on your game. I briefly thought about taking up your challenge, but I still have too many term papers on poetry to grade and so am a bit busy. But, it could also be more fulfilling, so, we'll see. The only super power I want is to make other people shut up when they say stupid / ignorant stuff. That's all.

This was absolutely hilarious...! Loved it!

Ha ha ha...loved your comment Benjamin Vogt about making people shut up :~) We can all use that super power.

I'm surprised no one has mentioned the possibility of said superhero to grow huge trees quickly to combat rising CO2 levels in the atmosphere. I suppose the idea of a massive carbon sink isn't super exciting though.

I don't know about superheroes using plant-based powers, but there was a pathological plant psycho on the animated series "The Tick". His super-villain name is "El Seed". I've included links to the episode below, if you're interested.

Growplantsfastman: The Evil Logger has decimated the Amazon with his deadly chainsawrobomonkeys!! No matter I'll just regrow it instantly using my powers!

Grateful villager: Thank you Growspantsfastman - by regrowing the rainforest we live in you've saved our livelihoods and in many ways our lives but what about the escaped chainsawrobomonkeys?

Growsplantsfastman: Don't worry, these bananas are laced with Phlebotinum - it'll restore them to the peace-loving primates you used to know and love!

Tai haku wins. Congratulations! As a prize, I award him the Internet.