The Maranta is dead. Long live the Maranta!

A formal complaint has been lodged against Tuesday's bad doctor, the one who required intervention from Helen Hunt. 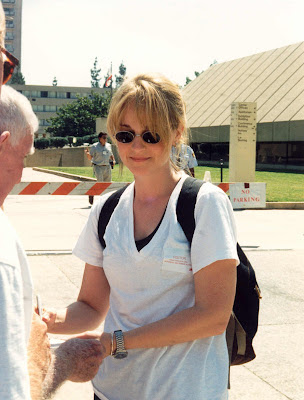 Helen Hunt, again, looking a wee bit less photoshopped. Photo by Alan Light. From the Wikipedia entry for Helen Hunt.
I don't expect that this is going to amount to anything, but am assured that the situation will be investigated and at some point I'll get a report on their conclusions. Presumably, these will be that the doctor was giving me his full and utmost attention and expertise, and the hospital is nonetheless sorry if my experience was less than satisfactory. It turns out that it's not so much about the results of the inquiry as it is about making them do one, however superficial and self-serving it may be.

(Or perhaps I totally want to see the man spanked hard -- metaphorically, he hastened to add -- but am pessimistic enough about that happening that I'm telling myself that making them do an investigation is good enough.)

I have a new work schedule. Now, instead of working from 8 AM to 5 PM on the days when I work, I'm working 6 AM to noon or 6 AM to 1 PM, with the last hour or two spent at the cash registers. This isn't enough to keep me out of the heat entirely (I was actually pushing to start at 5 AM.1), but it worked out well enough the one time it's been tried, on Friday, when I worked and didn't have to go to the hospital at all. Like, not even once. And Friday was actually relatively hot. So okay. This will entail a certain drop in income, most likely, and it's not going to be doing any favors for the plants in the greenhouse (so please, dear readers, show up and buy them all already), but it's a bad situation, and this is the best we could do, and it's only temporary.

The discarded Maranta leuconeura 'Marisela' has been replaced. I decided I didn't care enough about the M. l. erythroneura to bother, but I wanted 'Marisela' back. So as soon as I pot these all together into a single pot, the overall Maranta balance of the apartment will be sufficiently restored. Though I haven't checked all the plants in the apartment for mealybugs, so it's possible history will repeat itself in short order. 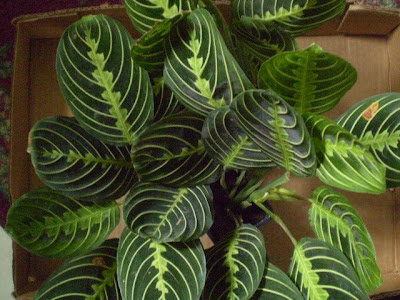 So things have been dealt with, mostly. I suppose there's still the little matter of an ER bill, eventually. But that's still better than a third ER visit.

Photo credits: mine except as otherwise noted.
1 The boss refused to present a specific objection; as near as I could tell, the sticking point was mostly that she wasn't sure I could get up that early, and/or that she thought the police would be alarmed if they saw someone on the premises that early. Neither of these strike me as particularly valid reasons to insist on 6 AM, so I infer that there's some other thought process involved that I'm not seeing.
Posted by mr_subjunctive at 2:50 AM

So what's going on with your blood pressure? Before I finally went on an ace-inhibitor, I was having some symptoms similar to what you describe. Are you monitoring it? Do others in your family have high PB?
Are you OK?

Not monitoring it, but when it was checked at the ER both times, and at the Occ. health office, it was within normal bounds; I didn't get the impression from the one doctor who seemed to know what he was doing that this was really a concern.

And yes, there's some family history, all on Dad's side (Dad himself, grandma, uncle).