Soooooooo, the other day I was thinking that maybe I wanted to change the colors around on the blog here. The pale green just wasn't doing it for me anymore so much. And because I like to make things complicated sometimes, I thought, wouldn't it be cool if I could co-ordinate the colors of the blog to the colors of the pictures that I post on the blog?

Which was an interesting enough idea that I decided to pursue it, by bringing up various pictures in Irfanview, shrinking select pieces of the photos down to one-pixel-by-one-pixel squares (to get the "average" color for that section), and then blowing them back up and making little swatches of the color. It was very roundabout, and I probably could have achieved the same thing, more or less, much faster with the eyedropper tool, but there you go. Anyway. So two and a half hours later, approximately, I had a bunch of colors to pick from for the blog, but I had completely lost interest in changing the colors anymore, so there was really no point in keeping them. Since I wanted to salvage something from the whole affair, I made this, a 13x13-square containing the colors I came up with. 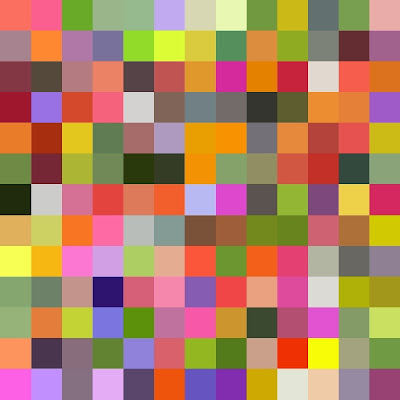 (I recommend opening the picture in a new tab or window or whatever: the shrunken version is blurrier, and therefore the colors are muddier, than the actual picture.)

The only real point of interest to readers, I'm afraid, is the relationship of the colors to the plants that inspired them, and having already burned hours on this project, I'm not going to go in and write names over the colors. But perhaps it's interesting in a non-botanical sense? It sort of resembles a Bridget Riley painting, a little.

Interesting exercise. I would have thought there would be far more green shades.
Aiyana

Wow, Mr.S! I don't know about blog colors, but you've made yourself a hell of an op-art quilt here!