There may not be a PATSP Crossword #2, but I thought I should plan for one anyway, just in case. 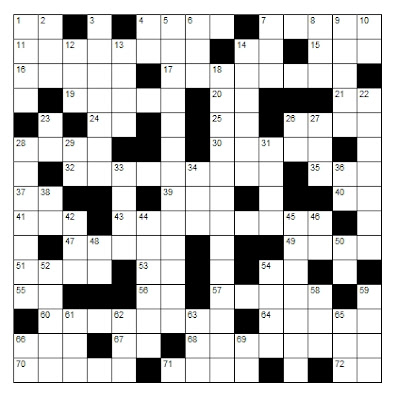 This is an actual, honest-to-God functioning crossword, solvable and everything. A number of the clues are kind of specific to PATSP, in that they refer to plant / "person" pairs or running jokes, so it helps if you're a regular reader.

For best results, open the puzzle as an image in its own window, and print it out. I have no idea how difficult this is really; I've never been a big doer of crosswords. (I tend to get frustrated too easily when I run into a block of stuff I can't figure out.) You, at least, have the advantage of being at a computer, where you can Google for a lot of this if you get stuck.

Feedback as to difficulty, comments about composition, etc. is heartily encouraged.

This puzzle was made with the demo version of Crossword Compiler, which takes the otherwise prohibitively annoying process of making a crossword puzzle and makes it only very extremely annoying.

DOWN
1 Romance novel heroine plant genus
2 Ohio State University
3 Landlord plant genus
4 Where my homies ___?
5 Sadistic plant genus
6 Don't make one of yourself
7 Alternate milk
8 Some blogs sell space for ______ on their pages, though few make any real money at it
9 Means, and is derived from, "lottery"
10 Mr_Subjunctive has been practicing adding this to the ends of his sentences, just in case the U.S. election goes badly
12 Twin Cities and Western Railroad (abbrev.)
13 The opposite of IANAL (internet slang)
14 Common name for Bambusa, Phyllostachys
18 Celebrity plant genus
22 The situation of having equal-sized gametes
23 The other of two elements involved in table salt (chemical symbol) (see 40 across)
26 Where movies come from
27 Take on them
28 False goats' beard genus
29 Oklahoma (postal abbrev.)
31 Variety of medicinal Aloe, or Vladimir Nabokov's wife
33 ________ Rinna, Taylor McBride on "Melrose Place" (a friend of mine used to call her "crazy lips")
34 http://www.blotanical.___/
36 ___ and out
38 Ultraviolet (abbrev.)
42 ____ and yang
44 Japanese horseradish
45 Love in a mist genus
46 Domain name (abbrev.)
48 Selenium (chemical symbol)
50 Singer lang
52 Website something______.com (Tagline: "The internet makes you stupid.")
54 Lying down at night (archaic?)
58 For example, "I did not have sexual relations with that woman."
59 You _____ as you sow, in the garden. Except for the weeds.
61 Three, to a Roman
62 Eastern Daylight Time (abbrev.)
63 Pounds (abbrev.)
65 Day, in Spanish
66 Double density floppy disks are/were coded ____
69 Delaware (postal abbrev.)

Don't know that I could create a crossword puzzle. An anagram perhaps. Now what was the name of that TV anagram site? I've forgotten, damn me.