We got a new shipment of plants in at the beginning of November, and among them were six new Dendrobiums. One was the "Humphrey Bogart" variety that I mentioned in a previous post, and one was, if not 'Hollywood,' then at least something very close to it in color. These are the other four. None of them had ID tags. 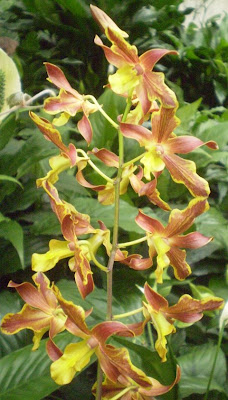 I don't know that it's a huge deal not to know what the variety name is on these -- it's not going to make much of a difference in how they're cared for or what they're going to do -- but it bugs me not to be told anyway. If nothing else, having the names handy means that I can ask for the same plants again, if they turn out to be exceptionally cool, popular, interesting, or whatever. 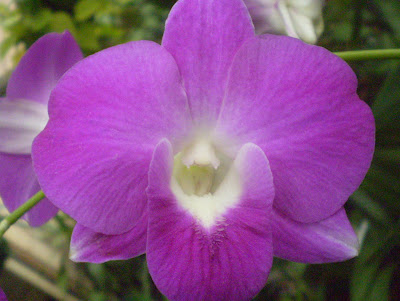 I now have two Dendrobiums, by the way, both keikis, and I picked up my first non-Dendrobium about a month ago (Brassiolaeliocattleya Helene Brown), which was also a tiny plant and relatively cheap. Last Saturday, I went out with the husband for a little while and was brutally attacked by a vicious Paphiopedilum (Paph. Supersuk 'Eureka' x Paph. Raisin Pie 'Hsinying' x Sib, whatever all that means) that would not leave me alone until I purchased it. 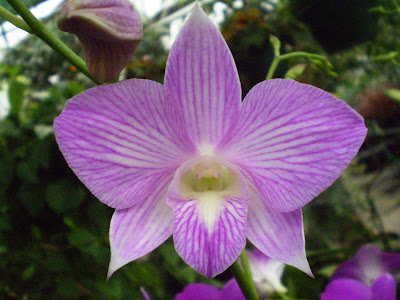 Love this one, by the way. This one and the next one both, really.
Add these to the Ludisia discolor I already owned, and we've gone from one orchid to five orchids in a matter of two months. I sense a slippery slope around here somewhere. 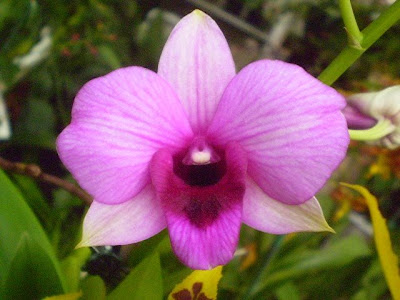 Also, I have to say, I would really like to know how an orchid gets the name "Supersuk." It seems like it would have to be an interesting story.

There will probably be a post about the Paphiopedilum in the very near future.

Absolutely gorgeous orchids there! Are the denbrobiums fragrant too?

Sadly, no. So far, we've only had a couple fragrant orchids, and neither of them were Dendrobium. But then, with colors and patterns like those last two, scent might be a little much.

Oooh, you're starting to fall hard! Orchids have a way of jumping on you, biting into your neck and refusing to let go until you've got a full on collection...

I stumbled upon your blog while looking for information on Monstera Deliciosa. Love your blog, your sense of humor and command of the English language. I am bookmarking it and will be pestering you in the future, for sure.

I'm still in the process of learning how to navigate your website. Is there a special place for orchid fans? I was bit by an orchid bug about two years ago and am proud to say I am yet to kill my first one. I am currently at 20+ and counting...

Not really a special place for orchids, no, though you can see all the posts related to a particular thing by clicking on the appropriate tag (at the end of the posts). For all the orchid-related posts, this would be the Orchidaceae tag. Provided that I remembered to tag all the posts properly, anyway.

Otherwise, the topics bounce from one thing to the next pretty often. If you're looking for anything specific, you can search the site using the Blogger search up at the very top left of the page.

What kinds of orchids are we talking about? I mean, do you have a bunch of Dendrobiums and nothing else, or is it a mix of genera, or what?

It's a mix, and it's probably as good a time as any to do an inventory. I started with a Phalaenopsis bought at a large hardware chain which shall remain nameless (hint: it starts with "H"). Incidentally, this little baby has been blooming consistently twice a year. I have since added a whole bunch of Phals, but unfortunately I wasn't sophisticated enough at the beginning to keep the labels, probably because I didn't have much faith in the whole enterprise.

Among the many Phals I have since acquired of note is Phal. Baldan's Kaleidoscope which was actually a rescue in pretty bad shape which recovered dramatically after repotting and graced me with blooms that lasted for NINE months. Its leaves are over a foot long.

2. Paph. Lemforde Surprise x Paph. Magic Vintner. Purchased about a year ago and the flower is about ready to open.

4. Phragmipedium Icho Tower with two flower stalks about to open. Each individual flower doesn't last long and falls off while still in perfect shape, but is quickly replaced by the next one.

5. Cattleya Lc. Mem. Laura Brabham x C. Califlora. This one is also about to bloom for the first time.

6. Oncidium Jungle Monarch (I think?). That one sent 3 new bulbs, but no blooms yet.

7. Psychopsis Mendenhall 'Hildos'. Love it. I bought it with trepidation because it's so exotic and fragile looking, but it just keeps blooming on the same stalk over and over again, and the flower is huge.

8. One dendrobium, bought at the "H" place. It keeps sending new growth, but no blooms yet.

That's pretty much it. Any new ideas? I get itchy around this time of year. I probably shouldn't, it already takes me about two hours to water them all. But who am I kidding?

"Supersuk" - 'suk' is most probably for sukhakuli being one of the parents.