Random plant event: fern gametophytes, or, How to Make Your Own Ferns at Home

I was curious about how difficult it really was to grow ferns indoors from spores, so I took either a frond or a part of a frond from a holly fern (Cyrtomium falcatum) at work and brought it home. I also took some damp toilet paper at work and wiped it on a Asplenium nidus that had formed spores, to collect those (I didn't want to cut off the frond).

When I got these home, I took a smallish (about 6 inches / 15 cm square) clear plastic container, washed it, filled it with vermiculite, and then added water to the vermiculite.

Then I held the frond above the wet vermiculite and brushed the spores off onto it with my fingers.

I unfolded the toilet paper with the Asplenium spores, and peeled it down to a single layer of paper, and set that down on top of the vermiculite too.

Then I replaced the top back on the tray, stuck it in an out-of-the-way spot where it would be protected from temperature fluctuations and get lots of light (artificial, in this case), and waited.

And now I have this: 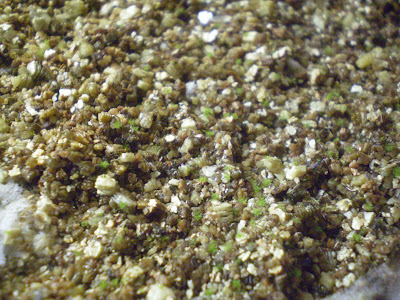 Click the picture to enlarge.
It's not, I know, the most exciting image ever. But those little green spots? Those are spores that have become gametophytes. This is encouraging.

Ferns have a very roundabout life cycle, where the spores hit the ground and, under the right conditions, develop into small "gametophytes," which are photosynthetic and exist only to form eggs and sperm (yes, each gametophyte produces both, though usually at different times, so as to avoid self-fertilization). The eggs stay put, but the sperm travels across the moist ground looking for an egg to fertilize. If it finds one, then the two combine to form a new sporophyte, which is the ferny-looking thing that most of us know as a fern. (Though the gametophytes are just as much ferns as the sporophytes, of course.)

We still have a ways to go before I have a bunch of little ferns sporophytes: first the sperm cells have to find some eggs, and then they have to photosynthesize enough to build some fronds before I'll see that anything is different. But still. It's not difficult to do so far, at least. I'll update when something new happens.

Fascinating! I have always wanted to do this kind of project, but everything I've read stated it was impossible. I guess you've proved it's not *quite* so impossible! Keep us posted! :)

Yes indeed this was an interesting read - we all know ferns propagate via spores but I have never actually seen them germinate that way. Sounds like too much trouble though. Since ferns are so common I'd much rather yank one a grown one off a wall or tree and take it home to plant. ;D