I have on occasion been accused of being Scroogey, and a holiday-hater, and so on and so forth. I haven't done any serious observing of Christmas since 2002 or 2003, and even that wasn't a lot. But look. December hates me. In 1987, for example, I got a ruptured appendix and spent eight days in the hospital; in 1996, I was getting over having the flu, clinically depressed, and having to deal with a breakup I didn't exactly want to have; in 2006, it was becoming increasingly clear that the place I was working was going to be going out of business shortly. And those are just the high points.

December has tried to kill me again this year. I got sick enough to miss some work (not a lot of work, and not death's-door kind of sick, but still) between the 18th and 20th. The husband and I were in a car accident on the 21st (not a huge deal, nobody injured, both our car and the car that hit us still work, but our vehicle did sustain some damage, and it was also the first non-trivial car accident I've ever been in so yes, I was a little shaken up afterward).

And also on the 21st, before the car accident, I got to work and the special Dracaena deremensis sport, the one that had gotten me so excited and pleased shortly after I started this job, which was eventually identified as being, if not D. d. 'Skunky' then a mutation which was superficially indistinguishable from 'Skunky,' was gone. 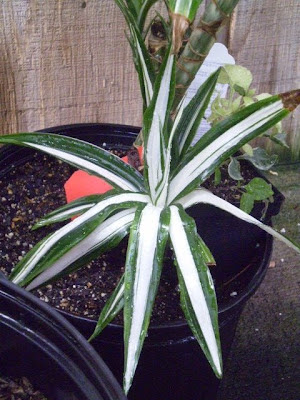 I looked high. I looked low. I looked everywhere I could think to look, and then I went outside to look in the truck we use for plant waste (it eventually gets composted, I think, or at least it gets dumped somewhere with all the other plant waste), and . . . well, you can guess where this is going, right?

Our poor little mutant was completely a lost cause: it had been a sub-zero night, and going in the truck meant certain death.

And this actually, no exaggeration, ruined my week, or pretty close. I was enraged, for lack of a better word. Also crushed and heartbroken and bewildered. But mostly enraged. So there was some foaming at the mouth, some ranting, some drinking (later, at home, not at work -- though I so would have), and I believe I was ranting at the husband about the Dracaena when the accident happened, too.

(If I could prove somehow that the accident wouldn't have happened if the plant hadn't been thrown away, could I sue somebody?)

You're wondering whodunnit, right? And why?

Yeah. Well. E-mail me. Be sure to read the e-mail address. I don't think this is something that needs to be broadcast to the whole internet. Or, well, I do, but doing so could cause me problems, so I'm not gonna, I guess is more accurate.

I get that it's only a plant, and that life will go on, and all that. But there was a particular attachment to this one. Hell, I took it home with me during the flood this summer, rather than leave it in the greenhouse and risk it being damaged. I went to a lot of trouble for this plant, and I would have paid a lot to have it, had I known the alternative was to kill it in cold blood. 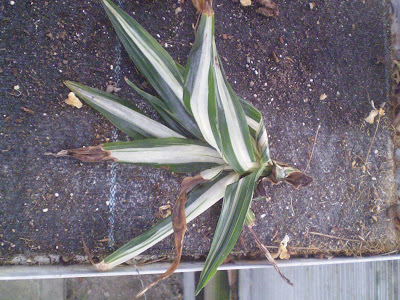 "Even the lilies of the field, um, make it the hell up as they go along." -Lorrie Moore
A celebration of "Skunky's" life will be held at a date to be announced later. He is survived by his father "Warneckei,' aunts 'Janet Craig' and 'Lemon-Lime,' cousin 'Janet Craig Compacta,' and uncle 'Art.' He was preceded in death by thousands of other genus members. In lieu of dismembered genitalia, the family requests that memorial contributions be made to the World Sports and Mutations Foundation, which works to place unusual plants in loving homes where they will be propagated and spread throughout the world.

Well that just stinks. Hope your luck gets better.

I have killed a lot of plants in my day, but hey, it is an opportunity to get a new even more interesting one.
Here is your assignment for the day and I know it will be difficult. Think of one good thing in your life and dwell on it.
Keep smiling.

Condolences to the poor plant and to you as well.

I thoroughly enjoy reading your blog and although I don't have the vast array of house plants you do, I have enough to appreciate your passion and the research you do and share here.

Hope you are feeling better and here's to a happier new year ahead.

Can't you re-root him?

Is there no chance of revival? Not a single node buried in there that could be cleaned up, hardened off and set gently into moist sterile medium?

I was recruited long ago for the War on Christmas to fight the perennial suckiness. Most of that suckiness is at least predictable (traveling when the roads are worst, deaths or impending deaths of elders, non-consensual shopping, etc.)

But Skunky? Why him? Why now? It's all so senseless.

He's not pining for the fjords. He's passed on. The plant is no more. He has ceased to be. He has expired and has gone to meet his maker. He's a stiff. Bereft of life, he rests in peace. His metabolic processes are now history. He's off the twig. He's kicked the bucket, he's shuffled off the mortal coil, run down the curtain and joined the bleeding choir invisible. This is an ex-plant.

May he rest in peace.