A co-worker brought this in for ID on Thursday; it had been planted in her (late) mother's yard, and until this year she hadn't even been aware that it flowered. Nursery Lot Guy and Perennial Expert didn't know what it was, so I said I'd take some pictures and ask the internet.

I have a guess myself, after a bit of poking around on-line, but I don't want to bias you, so I'll save it until after the pictures. 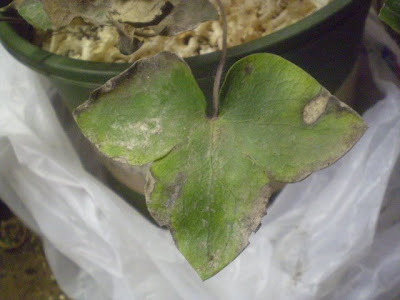 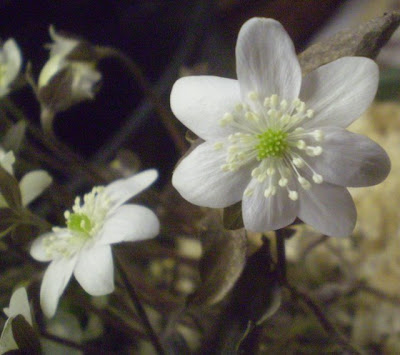 My guess is a Hepatica of some kind, perhaps but probably not H. insularis. Plausible?

That would be a hepatica for sure, but I'm not sure which one: perhaps H. nobilis var acutiloba also known as H. acutiloba? I have the common H. nobilis with the rounded leaves, (it's native though extirpated here in Nova Scotia) but no white-flowered forms.

I'd make a quick guess at H. acutiloba myself. Hepaticas are common woodland flowers of early spring in upstate NY where in the 50's we all still put tiny May baskets together - how long ago, a sweet memory now for someone living on the rocky coast of Maine. Britton and Brown do say that "confusing forms occur", meaning only that the species are tending toward intermediate forms - but this one looks pretty straightforward to me.

I'll say H. nobilis var. obtusa (used to be H. americana), in the white flowered form. In the woods around here, I'd say 25% are white flowered, and they're all blooming now. Acutiloba's leaflets have little sharp 'spurs', so the leaflets are all slightly divided. H. insularis a few years ago would not have even been available to gardeners in this country (I only know one source for it now; Asiatica), and the leaves are quite different from nobilis; maybe half the size, and with shorter stems (it's just a much smaller plant all around; very dainty), and very prominently (and beautifully) mottled with two tones of green. it also blooms later (my plant in our garden isn't even showing buds yet, while the nobilis are all blooming).
don

It's a Hepatica triloba, a woodland wildflower and common from the eastern seaboard to Missouri. That last bit could be shifting with climate change.

Assuming it's a native, it's Hepatica acutiloba. H. americana would have a much broader and usually shorter central leaf lobe, and acutiloba doesn't have to have the extra "spurs." Also, the former ranges much further into Iowa. See www.efloras.org for range maps and keys (where the species are listed under Anemone acutiloba and Anemone americana, the latest taxonomic understanding). Describing them as mere varieties of the European Hepatica nobilis (=Anemone hepatica) doesn't seem to make sense, since both American plants overlap widely in range but seem to rarely if ever hybridize.

Based on the flower alone and if it had come from Ireland I would say it was closely related to our wood anemone (Anemone nemorosa), but I guess hepatica is also a Ranunculacae so it's not surprising I would make that connection. Interesting blog. Will visit again.

Whoof! After looking at pictures online, I see everybody else was right that your variety is acutiloba, not obtusa. That miffs me; not that I'm miffed about being wrong (if being wrong bothered me a lot, I would have caught fire and exploded a long time ago). What miffs me is that I've had a big old plant of acutiloba in the garden for years, that would pretty well fill a washbasin, and I based my thoughts on the appearance of that plant, but it is a completely different critter than what is seen online. My plant has leaves that look rather like the terminal leaflet of a holly fern (if you know what I mean), and the leaves are thin and very dark maroon in the winter and spring, and it is much more evergreen, and the new leaves come out in spring before it really blooms, so it is VERY leafy. I went out to work at the nature preserve today, and looked at about a hundred hepaticas (out of many thousands blooming), and I do see a spectrum of leaves, from more rounded (but with the acute "tips") to those that look like little trident maple leaves, but nothing close to my plant. I unfortunately don't remember who gave me my specimen; not that that often helps, as usually it came from grandma, who got it from her Aunt Tess, who took up skydiving, and twenty years ago her 'chute didn't open one day, so she's gone. Anyway, my miffiness stems from the fact that I don't mind if the taxonomists set up all these nebulous species (H. americana=nobilis=nobilis var. acutiloba)... but at least the plants ought to have the decency to look somewhat like the other plants in the group. I guess I need to get out more and look at other plants... and speaking of getting out, the reason I stopped by was I've been meaning to see if you would be interested in stopping over sometime for a garden tour? The primulas and fritillaries are starting to bloom (and yes, the hepaticas). We even have cold beer in the fridge (if you call Bud Lite beer). There is usually also some Mexican stuff somebody left at our last party. If you're ever interested, email me at lizndon@mchsi.com (we live off Dubuque St. near the dam).
Don