I don't even remember when it was exactly, but at least three or four months ago, I had a bunch of 'Fire Flash' seeds sitting around, and decided I wanted to grow them. So I took a bunch of yogurt cups, and filled them with dirt, and worked seeds into the top of the dirt, and watered everything, stuck it on the back of one shop light (for bottom heat), directly under another shop light (for bright light), and waited for germination to happen. And nothing happened at all. In fact, so much nothing happened that I was thinking that maybe I'd let the seeds get too dry, and killed them all or something, by accident.

Eventually, after continuing to water the cups and having nothing happen, I gave up on the project, and dumped the soil, with seeds, back into the potting mix reserves for use in future plants. I didn't want any stupid Chlorophytum 'Fire Flashes' anyway. (Some of you will already see where I'm going with this.)

So time passed, and I had a bunch of Aloe aristata x Gasteria batesiana (?) offsets to pot up one day, so I apparently used that old dirt, and skip ahead a couple months, and suddenly I have Chlorophytum x 'Fire Flash' seedlings coming up all over the place in the Gasteraloes. 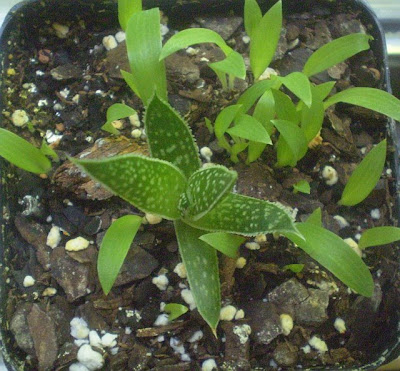 Not only that, but either I planted way more seeds originally than I remember, or I'm getting much better germination rates than I've gotten before with these seeds. I'm going to have, it looks like, about sixty of the damn things. Maybe more: seedlings are still coming up.

I'm not sure exactly what this signifies. I mean, if you're wanting to germinate your own plants, it doesn't really seem practical to plant them and dump them out and then plant them again in something else, only to pull them out of the something else later. And my original theory, that maybe I was letting the soil dry out too much, is kind of shot down by the fact that they came up just fine when planted with Gasteraloes, which aren't exactly aquatic plants. So perhaps I hadn't planted them deeply enough, or maybe the soil needed to be more firmed down, or something like that. Maybe I just hadn't given them long enough. Who knows. In any case, if you want 'Fire Flash' seedlings, try not to want them too much or try too hard, maybe, and don't worry too much about it if they don't all come up immediately. They'll still be there. Waiting.

Ha! Sounds like you should host your own plant sale, Mr. S. Maybe it would pay for a few of the new acquisitions!

Plants are just like that, when you've given up all hope.

That's funny! Now you have to figure out what to do with them all!

Hmm... so maybe I should just dump the 'Fire Flash' seeds I harvested at work in the pot of one of my other plants and forget about them?

It is always so funny reading You! I live in Hungary and this type of Chlorophytum is not so easy to acquire and is quite expensive I think, a 4-inch put is about 10-12 $. I would be very happy to be so successful with the propagation of this plant because it is so nice especially with a pot that fits in colour.
Richard

Often when I plant cactus seeds, I'll get about 10 seedlings, pull them out, and a month later more seedlings will pop up, and continue like that for a year... I think some seeds just want to sprout when they want to sprout, and they have absolutely no concern for your convienence.

last year i planted a potato and got a watermelon, having had a similar "i didn't want a watermelon thing anyway" moment with my dirt.

That happens a lot to me! After I give up on seeds and plant different ones in the same pot (waste not want not) the first ones grow. I didn't realize it is hard to get Fire Flash in Hungary, that is very interesting. I have two and I love the colours. One had seeds when I got it and I planted them but nothing happened. Yet.

It's also possible that the seeds have a double dormancy requiring a wet period, then a dry period followed by another wet period. It would be interesting to try again with fresh seed...sounds like fun!