Before leaving work (except that it wasn't really leaving, since I went back yesterday, and may go back again tomorrow, though tomorrow, if it happens, really will be my last day unless I do seasonal help in the future, which is a possibility though not a very strong one), I did finally break down and buy a Hibiscus. At the time, I was still very taken with a solid, deep-orange one ('Caribbean Breeze:' see the Orange post for a picture) we'd had off and on recently, and when I found a plant with no flowers, but a tag indicating that it was a single orange like the one I was coveting, I went ahead and bought it.

Shortly thereafter, it bloomed, and -- not quite the plant I was looking for. 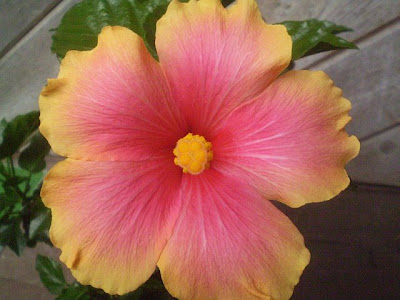 I'm not saying that it's not nice. Obviously it's nice. And it's bloomed at least three times since then, which is pretty impressive considering that I've only had it for two weeks. But it's also mostly pink, if we're being honest about it, and part of me is still disappointed that it's not orange like the tag said it was, even though this is more interesting than the orange would have been.

Very pretty flowers, just the same, although it would have been pretty cool to have orange flowers without any pink. Hibiscus is cool; enjoy your new plant!

That's interesting. We have hibiscus everywhere around here and I've never seen one that color. I think you lucked out.

Good luck for the future, and what a beautiful flower.

reminds me of a fruit sherbet

I recently bought an untagged hibiscus and hoped it wasn't peach. Seems like every hibiscus I see at garden centers is peach, which is the most dull color a hibiscus can possibly be. Turned out my plant is a double-flowered red, and I don't like doubles--but at least it's not peach.

Yeah, a lot of the larger plants I've been seeing around have either been peach or sort of a medium pink with a dark center. Not sure why just those two varieties, but it's all Lowe's had when I was there last.

At work, we had at least one peach one, and another that was a double peach, and then lots and lots of pinks. Though they got a new shipment of stuff on Sunday that included some single reds, too.

Oh, I love it! Reminds me of how my mom had gigantic hibiscus trees/vines (20 feet high?) as houseplants when I was growing up.