I saw buds on the one lonely full-size Senecio macroglossus at work right before I "left," and then one flower opened for me right before I "came back." This is cool, because I had figured I would never get to see the flowers, which according to rumor were (quoting from the Senecio macroglossus plant profile) "big, yellow-to-white daisy-like things that you wouldn't expect from a plant that looks so much like English ivy" and had a "lemony" fragrance.

For some "reason" I'm all of a sudden really into "scare quotes." (I'll stop now.) 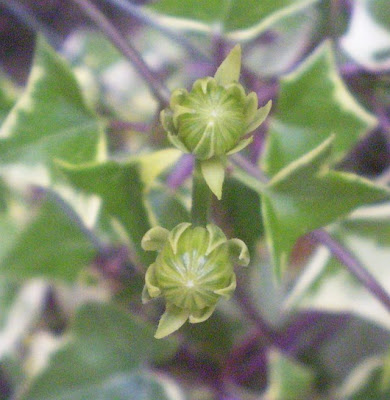 Reality is a little disappointing: they're not especially big, and they don't smell like lemons. In fact, as far as I could tell, they don't smell like anything at all. (But as I noted in the profile, I wasn't really expecting them to, because the same source claimed that the foliage, too, smelled like lemons, and I'd never detected anything remotely lemony about the leaves.) 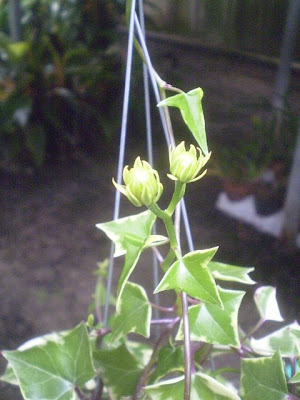 The general size and shape of them reminds me more of Zinnia than anything else, specifically the 'Profusion' line of Zinnias. The Senecio flowers are slightly larger, maybe a couple inches (5 cm) across, but they're built similarly.

[pause to look things up] 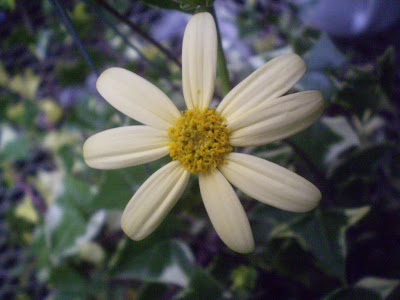 Well, what do you know. Zinnia and Senecio are both in the Asteraceae. So they really should sort of resemble one another. Learn something new every day.

Glad I got to see this, because otherwise I would have wondered about it forever, and props to the plant for the timing. Almost makes me wonder if maybe I want to try growing one again. So I bought another one. Just when I thought I was out, they pull me back in. . . .

Perhaps the person who said they smelled like lemons, should stop dusting the plants with Pledge.

I've been lurking awhile, just thought I should emerge from the interwebby shadows and say HI!

Could it be like some cacti and orchids that only have "scent" at "certain" times of the day? In other words, perhaps you should break in at 3:00 a.m. and sniff the Senecio.

Yeah, I'd thought about that. It's possible. Though the leaves were likewise supposed to smell lemony, and they don't, which makes me skeptical. Also they discourage break-ins there.

You know the Senecio rowleyanus? String of pearls? That's how I disovered that Senecio was a member of the aster family, way back when. I thought it was amazing and wonderful...