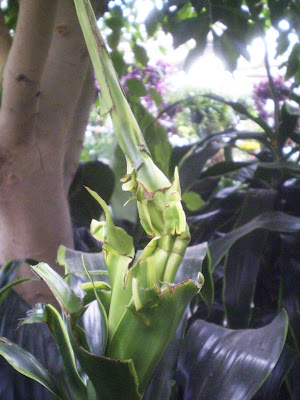 The best theory I can come up with is that it's temperature-related, though I think WCW said maybe it could have been related to pesticides. Not that these have had pests, to the best of my recollection, but we do spray weekly in the greenhouse, and perhaps one day the sprayer (actually more of a fogger) was uncomfortably close to the Dracaenas. This doesn't really satisfy me as a theory, for a lot of reasons, but I don't have any satisfactory theories. The temperature thing doesn't really make sense either, because these plants were also around last year, and the temperatures were within the same general range both years as far as I'm aware.

Whatever it is, it's clearly got a cause of some kind. There's no way that this many Dracaenas spontaneously decided to do something none of us have ever seen before all within a two-month period. The mystery deepens.

The plant in the picture will probably be cut back and forced to sprout new growing tips, making it more or less unsellable for the next six months or so.

Not that it wasn't anyway; it was priced over $100. Though this is borderline excusable for a very large, still fairly new cultivar like 'Art,' it's unlikely that customers will be beating down the door. This was my fault; I ordered it. But I had good reasons! Namely, that we'd just sold a couple Dracaenas of similar size and price, in other varieties (one was a 'Lemon-Lime'/'Goldstar;' I forget the other but want to say it was a 'Limelight.'). It didn't seem like that big of a stretch when I brought them in.

'Course, I wasn't counting on 'Art' being a self-mutilator when I placed the order, either.

Regarding the BDSP, I know a lot of folks who repot large unwieldy cacti on a regular basis, and their method of choice is to wrap the thing in newspaper and use the ends of the newspaper as a handle.

Good luck with that thing! :-)