I'm surprised that it took me so long to get into Neoregelias. They're really awfully nice little plants. I suppose the reason I didn't discover them before the last year or two is that they're uncommon in stores: we had them where I worked, and I've seen some at, of all places, Ace Hardware, but I don't recall ever seeing them anywhere else. And they tend to be expensive when you can find them. On the up side, they're pretty, and aside from having some problems getting offsets to root, I haven't had any problems with them, no pests or anything. 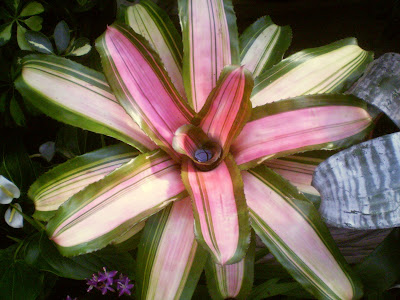 I don't own a 'Yang' yet: this is a picture from ex-work, the last time I was there. I don't know a lot about 'Yang' specifically, though I can tell you it's a hybrid of Neoregelia carcharodon and N. carolinae lineata, and the patent (may require free registration to read) claims that they produce a lot of offsets, up to fifteen per plant, after flowering. There is also a N. 'Ying,' (sometimes 'Yin'), which I haven't seen in person yet. (Get it? 'Yin' & 'Yang?') 'Ying' is supposed to be the same thing but in reverse: green leaves with pink/white margins, but it's a hybrid of the same two species, and also produces a lot of offsets.

Hm, I like that. I should get a Neoregelia. Maybe "Yang." My laid-off-coworker now-temp-coworker-for-another-week is named Yang, so it'd be like a memorial. :-D