I really like Tillandsia cyanea as a houseplant, though I bought mine post-flowering (for cheap, from the grocery where I was working at the time: this was a long time ago) and have not been able to get it to reflower. Not that I've been trying very hard, but still, it would be nice. 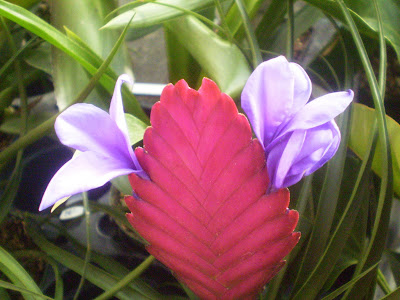 I haven't tried very hard in part because if I'd wanted to see one in bloom, all I usually had to do was go to work (the above is a picture from last week, of a plant where I used to work). They were a fairly solid seller, when flowering. After flowering, not so much, though we did keep one around long enough to flower a second time (and then it sold).

I would have sworn, in fact, that the re-bloom came from the same rosette of foliage that flowered the first time, though that's not what's supposed to happen: according to the Internet, the original plant, the one that flowered, dies back while offsetting, like for every other bromeliad.

The thing is, though, that I think this may not be true for the Tillandsia genus, because not only did it look like the one at work rebloomed from the same spot and never died back, but my plant at home never died back either. I also don't remember any of the "air plant" Tillandsias at work dying back, though the plants at work usually didn't stay around long enough to be watched.

Perhaps there's something about me makes bromeliads really want to live -- I have a Aechmea fasciata from November 2006 (35 months ago) which is still alive and producing pups, even though the conventional wisdom is that bromeliads die within 9-12 months of flowering -- but I suspect not.

Hà Xuân would know, I bet. She has an incredible and gigantic T. cyanea that bloomed a few weeks ago, which has clearly been around for a while and would surely have died back a couple times by now, if dying back after blooming is something they actually do. I've left a question in comments on her blog a couple days ago, so maybe I'll find out soonish.

I have had a T. ionantha I bought after flowering but with a tiny pup visible about a year ago. While it hasn't rebloomed (too low light and probably not enough water) it's been a year (+/-), the pup is as large as the parent plant and has not died back. Maybe it will at some point but it's certainly taking its time about it.

I found that if you keep removing the pups from the mother plant (obviously when they're large enough), the Aechmea fasciata keeps producing more of them. And mine didn't die within a year; it took much longer than that, at least a couple of years.

Mine always die. Jealous over here;)

We do have a couple of Tillandsia cyaneas at work - they look like they're the same size as Hà Xuân's. Nobody ever pays much attention to them, though, they're just hidden away in a corner waiting for their owner (our boss) to pick them up again and drown them.
I know I've pulled plenty of dead leaves off them (which is a very annoying task, because every so often the whole plant will come out of the pot and fall to pieces, and then you can crawl around under the table and gather them up again...), but I can't remember seeing a whole dead rosette. And they're flowering pretty constantly.
So either I have a very bad memory, or they don't die back.

I don't know if this is true or not but did you ever hear of putting bromeliads in a plastic bag with a cut wedge of apple that will release a gas that will cause the plant to bloom after a time? (I don't know how long to leave it with the apple or how long it might take for a bloom to show up).
The cliche has merit: 'A little knowledge is a dangerous thing!'

I'm fairly certain that the apple thing is true, for most if not all bromeliads; I've heard it requires leaving the apple with the plant for several days, though. I've never been that interested in making it happen to mine: if it comes up with the idea on its own, that'd be great, but I like it well enough without flowers anyway.

I'm glad nobody else seems to remember seeing them dying back either: I still haven't seen anything from Hà Xuân, but I'm feeling a little more confident about my theory all the same.

I heard of the apple thing as a way to force pineapples into flower/fruit (Here, under "Forced Fruiting" if you're interested). I see no reason it would not work with other Bromeliads.

Ethylene is a wonderful compound in so many respects. It makes a lot of things fruit/flower/die/grow/etc etc etc etc. Apples just happen to have a really high quantity--you could use other fruits, too, I think, but apples are probably best. Or, heck, I'm sure you could get a supply of ethylene from a chemical company and just use it like a hairspray bottle.

My Tillandsia doesn't look nearly as nice as this one or Hà Xuân's! I bought it in flower a few months ago--I still haven't posted about it, but I plan to. It has a few pups already. I hope it doesn't die back! The red colour in the flower stalk thing is already fading, but I think it's because I don't water it like it likes.

Was there a conclusion as to whether those "air plant" Tillandsias will die after flowering? Mine just began to bloom, and I'm hoping it will live.

Well, even if the rosette that produced the flower were to die, we're all pretty clear that there will be a mess of offsets to replace it, which will stay attached to one another and look more or less the same.

I never heard back from Hà Xuân (who probably doesn't have e-mail notification on older posts, I'm guessing), but yeah, it looks like the whole Tillandsia genus in fact doesn't die back after flowering even though all the other websites say that they do. Or at the very least most of the genus doesn't.