Well this was unexpected. Yes, the forecast from the National Weather Service had occasionally included a chance of snow over the weekend, but the days when the snow was supposed to appear kept changing, and sometimes they weren't predicting any at all, and it seemed very early, still, for snow to be happening (there often isn't any at all until mid-November), so I wasn't taking this all that seriously. But it snowed for a couple hours here anyway, Saturday morning, and it was coming down hard enough for some of that time that we actually had some accumulation. 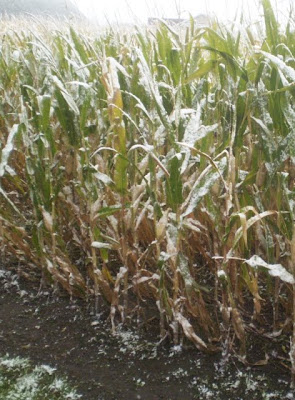 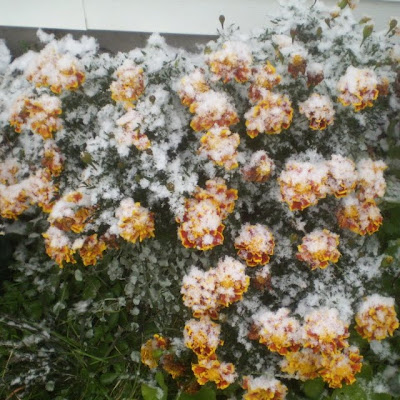 It had all melted off a few hours later, but still. Not only very early-seeming (I have no idea whether it's early statistically), but also an awful lot, for a first snow. 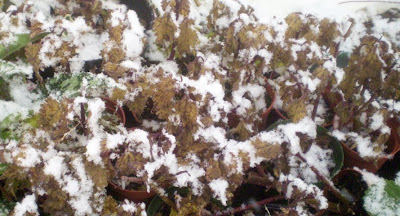 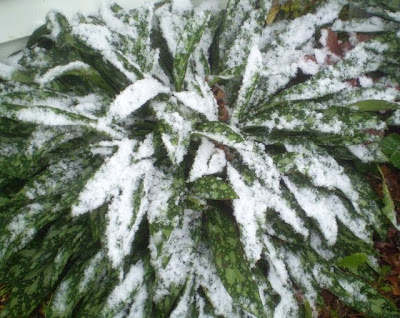 Last winter and the winter before were both exceptionally snowy years around Iowa City: I couldn't track down any specific information about it, but 2007-08 was at least the third-snowiest winter on record. I wouldn't object, personally, if this were to happen again (I know a lot of people would, though.), except for one thing: we must not lose electricity this winter. Extended periods without electricity and large tropical plant collections do not go well together. Not to mention Nina. The husband and I have talked about getting a kerosene heater and/or a generator; both seem like pretty good ideas to me, but I don't know if we can afford either. (Also kerosene heaters are hard to find now? Apparently?) There does need to be a plan of some kind, though. A long spell of temperatures below 60F/16C would kill about a third to a half of my collection, and if it went below 50F/10C for a long time, I might lose three-quarters. This should not be allowed to happen.

It does seem very early for snow! I'm unfamiliar with Iowa's climate though. Sounds like getting a small kerosene space heater might be needed.

No, No, No! Don't go there with the loss of power! Because my home is 'high' up, it is SOOOO prone to power outage in the slightest of winds. The longest stretch was 4 days (the weekend we moved in...lol!) I don't want to think of you losing any of your precious babies :( Our earliest snowfall last year was October 26Okay, hope I didn't jinx it now!

Here in the UK we're expecting our first ground frosts this coming week - but snow - no thanks.

Great snow shots, Mr. S.! You should be able to find a kerosene or propane heater if you have a Tractor Supply or Cabela's near you. If not, check out Lehman's (www.Lehmans.com) and you'll find an assortment.

Wow, that is early for snow, even though I shouldn't be surprised, living further north and all.

I hear ya about the generator. My husband mentioned getting one too. It would certainly be necessary with the cold winters we have, but this year has been overloaded with expenses with moving and buying a home and all the stuff that is needed to maintain it, so we certainly don't need yet another expense.

I'm really glad it hasn't snowed here yet. I would have been a little devastated if I woke up and saw that. Now I'm a little paranoid so I just brought in the last of my Banana plants today. Hopefully you won't see any more for a at least a few weeks...

About Nina and power outages: If it's just a short one (less than a day), and you're worried about her going without heat, you could try doing what we do with our golden gecko (whose name, ironically, is Timmy).

Namely, take one of those light cotton bags with a draw-string that they ship small reptiles in, place the lizard in, and suspend it under your own sweater. A baggie of some kind of soft, durable gauze/mesh might work, too..

The husband informs me that we're planning to get a generator, and possibly also a propane heater, as soon as a check we're expecting comes in. So as long as we don't lose power anytime very soon, we should be okay.

OMG! Too early for snow, at least in Tennessee. Iowa is wild, though, just have to think back to the primaries!
My grandpa heated his office (vet) with a kerosene heater, he had a huge one, bigger than fridge for forever, but then he replaced that one with a small one, maybe a little bigger than a large suitcase? I'm not sure what type of ventilation/installation they require, but a VERY reliable form of heat. Good luck!