This is a really old picture, dating back to the bygone days of 2007. (How innocent we all were!) I've had it sitting around so long that I'm no longer quite sure why I didn't use it then, but I suspect the issue is that I either didn't think the quality was quite up to par (the image has faint vertical lines in it, which is something my camera used to do before I figured out how to take pictures with it not doing that) or that the flowers themselves were too similar to some other flowers I'd taken pictures of recently. I really don't remember for sure. Doesn't matter. 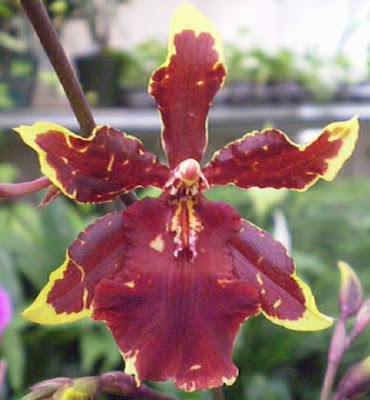 This is the only Colmanara I've ever seen. Other pictures I ran into on-line for this particular cross mostly appear to be a little less ruffly and a little less yellow than is shown in my picture. I couldn't tell you if this plant was different because it was mistagged (always a possibility) or cultivated differently or what. Maybe they're just variable.

Multigeneric orchids like Colmanara are usually given three names: the first (Colmanara) tells you which genera of orchid were involved in the cross (here, Oncidium, Odontoglossum, and Miltonia). The second name (Wildcat) describes a particular cross between two parents, which in this case refers to Odontonia Rustic Bridge (Odontonia = Odontoglossum x Miltonia) and Odontocidium Crowborough (Odontocidium = Odontoglossum x Oncidium). Any given cross may produce thousands of seeds, and each of the seeds, because it has inherited a slightly different batch of genes, may be subtly different from all of the others. The third name ('Bobcat') refers to a plant grown from a particular one of those seeds; all the 'Bobcat' specimens out there are clones from that one original plant.

Orchid genealogy is not a particularly interesting subject to me, but obviously both of 'Bobcat's parents were crosses as well, so the hybridization could easily go back several generations before one hits any actual species. Orchid fanciers do like to fiddle with things.

The reason why orchid names are often so weird (See the post about Goodaleara Pacific Truffle 'Surrogate Star' for complaining about weird orchid variety names. Also it's a nice flower in its own right, and is worth the trip.) is because, clearly, at some point one just runs out of descriptive words and has to resort to paging through the dictionary. I fully expect to see a Beallara Truckasaurus Matisse 'Ninja Breath' at some point very soon.

Its still a beauty, but I so agree with you about weird orchid names.

Wonderful pic, and wonderful plant... I never did have the patience for orchid names though. I always felt like I was learning a new language. Mexican restaraunt menus leave me confused... Languages aren't my gift...

You should develop a new hybrid. Then you can call it 'Ninja Breath' or better yet 'Mr_Subjunctive Breath'. Do you find most Cymbidium take a long time to develop flowers? I've been watching one for about a month and it looks like the buds are still weeks away from blooming.

I actually have zero experience with Cymbidium -- I don't remember ever seeing them on the availability lists, and we never had any. Though orchids in general seem to take a long time to go from bud to flower, so it wouldn't surprise me if Cymbidiums did too.

Cymbidium buds do take a long time to open, like many orchids, as you say, but they're well worth the wait and the flowers last for months. Fantastic fragrance, too! Loved your Truckasaurus etc. Orchid names always remind me of the names of champion dogs and cats in the registries, too bizarre/precious/what-have-you for words. Fortunately, the actual call names are usually a lot more down-to-earth. Our Shiloh's father is called Ash, so you can imagine our surprise when we got the pedigree and saw that his registered name is Pioneer's Army of Darkness!

Gee, as short as this post is, Mr_Subj., I find it TOTALLY confusing! BUT, I don't really care...if the plant has a beautiful bloom such as this, that's good enough for me to just purchase and enjoy ;)
LOL...Claude's comment on the mexican menu...me too!
Lynn