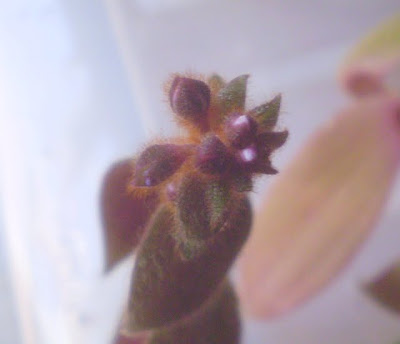 This is a really terrible picture of a really interesting event, for me. First the terrible-picture part: I took 25 different shots of this same plant, and this was the one that was best in-focus. I probably should have tried with the flash, I realize as I write this (the blur almost always comes from me not being able to hold the camera steady, not any inherent defect in the camera's auto-focusing; a shorter exposure time gives my hands less time to move around), but I didn't think of it at the time.

As far as it being an interesting event, well, it had never occurred to me that Cyanotis bloomed. I mean, if I'd stopped to think about it, I would have realized that yes, it's a plant, obviously it blooms, but I never stopped to think about it. And even then, it wouldn't probably have occurred to me that it might bloom for me. So this is interesting. I'll post a picture -- a true-color, in-focus picture -- when I see some flowers open.

Maybe Santa will bring you a tripod.

Is this plant also known as the Teddy Bear vine? I too have trouble with keeping my hands still for a clear picture...and usually have to alot more than 25!
Purple flowers when opened? Guess we'll find out soon ;)

Doubtful. We didn't send a change of address form to the North Pole when we moved.

Yes, this is teddy bear vine. I did take some pictures of some open flowers earlier today (haven't uploaded them to the computer to see how they turned out: I should probably do that), and they're a very weird, probably unphotographable bluish purple.