A couple weeks ago, I posted about (among other things) flower buds on my Pelargonium. Those buds have now opened, so I figured I owed y'all a follow-up.

This doesn't capture the color very well, but there's something about my camera, or maybe something about Pelargonium flowers, that keeps pictures from producing very true-to-life color. It's in the ballpark, though. 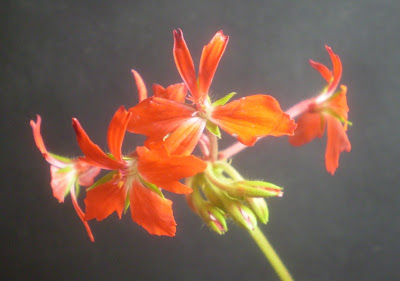 The flowers are basically a really bright orange, quite a bit less red than they appear here. There's sometimes a slight hint of coral, depending on the light. It's a pleasant enough color as far as I'm concerned: I've got nothing against orange. Not particularly big and showy, but, you know, whatever. I kind of don't like the big snowballs of flowers the regular varieties produce anyway, and it's not like the plant owes me flowers in the first place, given the leaves it makes. So I'm satisfied.

The plant itself appears to be falling apart a bit: whether this is because the flowers are taking too much energy to produce, or whether I let it go a little too long between waterings, I'm not sure, but if it's the latter, the plant really ought to try to get itself used to that.

'Vancouver Centennial' is one of my favorite pelargonium cultivars, too, Mr. S. Mine bloom regularly, doubtless because they think they're about to die from benign neglect and had better set some seed before it's too late. Poor things! They have a better life out on the deck where it actually rains now and then. But they always make it through the winter in the greenhouse, then come back into their own once they get back outside...

I never get tired of pelargoniums, whether they're the common as cats scarlet ones or the more rich fuchsia, carmine and wine ones. They just make me happy. We're overwintering a couple in the kitchen and so far, they seem quite content, even offering a few flowers. I can't tell you the name of the really cool one because the label has gone amongst the missing and I can't find it in my photos. Am a bad organizer.

I really like the 'odd' color of this cultivar. Nothing beats a planter filled with them. My favs are the ivy and scented varieties~such a distinctive fragrance, and edible, too!

Beautiful colored foliage and the flowers are self-cleaning. As pelargoniums go, this is among the very best in my book. One of my pet peeves is the double forms whose petals never drop.

I used to have a friend, Sylvia a.k.a. The Geranium Lady. She had a table at the farmer's market selling all kinds of Pels and I usually helped her. Vancouver Centennial was always popular and in good light it got gorgeous; dark dark leaves with an edge of lime green.

Once I saw an elderly blind man being escorted around the market, so I grabbed leaves off a mint (large and furry) and a lemon (stiff and spiky) and took them to him. He really enjoyed the different scents and textures.