I buy a lot of plants that can flower without ever necessarily expecting that they will flower. In fact, most of the plants I have here have earned a spot whether or not they ever produce flowers, because I like the leaves, or the habit, or something else. 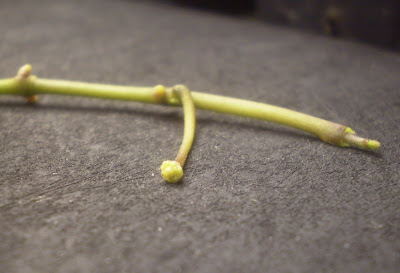 That said, it's always nice when flowers happen anyway, as they have lately for Cyanotis kewensis, Hatiora salicornioides, Dieffenbachia 'Tropic Rain,' and Pelargonium x hortorum 'Vancouver Centennial,' and it looks like Hoya lacunosa is next in line.

I don't really know what to expect from this; I've seen the flowers once before, at work (my plant is the descendant of cuttings from the work plant), but only briefly, because the plant sold shortly after flowering. They were light yellow and fuzzy. I hear the scent is kind of perfumey/floral. I suppose we'll find out. I only have two peduncles (short stems on which flowers appear) at the moment, but I haven't looked very thoroughly, either. Updates as events unfold.

Meanwhile, here we are again on New Year's Eve, which I've long appreciated in theory, as a holiday. In practice, it never seems to go all that well (my best holidays, statistically, are Thanksgiving and Valentine's Day), but I like the concept: unwrapping a shiny new year, hope for the future, heaving a crappy old year into the dumpster, yada yada.

I've not been that impressed with the quality of recent years: they have their moments, but clearly we've started buying the knockoffs, not the brand names. I mean, 2006 looked like it was made by a team of bonobos out of saran wrap, discolored felt and a glue gun. (The tag probably reads "YEAP.") 2009 was marginally better, but all the same, I think I'm due for a year that's actually good on its own merits, rather than just looking good by comparison to the other years. There's a good chance I'll get it: years ending in zero have been good for me in the past.

The husband and I will likely be staying up until midnight tonight, but we do that pretty much every night, so it's not something special for the day or anything. Hope everybody reading this has something more fun than that planned. And of course it goes without saying that I hope everybody has a good 2010.

I see you have new leaf buds too. Yay!

My sweetie and I will lift a glass to you and the husband with thanks for the too-rare bright spots in 2009, PATSP being one of them, and great hopes for some improvements in year quality for 2010 for us all. The big thing in our communties will be the dropping of the sardine - preceded an hour earlier by the dropping of the maple leaf. That lets me cheat on the New Year by Iowa standards so you'll get that glass way early and we can get some sleep.

Definitely you're one of my bright spots too, Mr_S! Your sense of humour is immaculate and your information about plants always much welcome. I too hope this coming year is an original, new and shiny one, rather than something from the remainder bin. Happy 2010 to you and the husband!