This didn't quite work out as intended, but since I went to all the trouble to do and photograph it, damned if I'm not going to at least squeeze it for whatever blog post juice it might contain.

I borrowed this idea from an anonymous friend. It's pretty simple. You get a bunch of balloons, put a few drops of food coloring in each balloon, fill with water, tie off, and then leave them outside to freeze. When frozen, you pop the balloon, which leaves you with a rounded blob of colored ice, which you then arrange in an artful and decorative pattern.

So it's basically a technique for making your own temporary, winter-only gazing globes, I guess. Kinda. 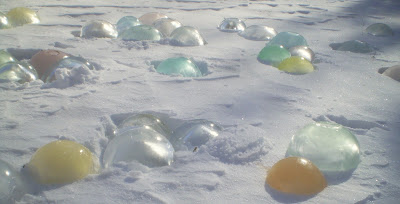 Mine didn't turn out as intended. I had set them down on the ground in the back yard to freeze, next to one another, and although it got very cold on the night in question, they apparently managed to insulate one another well enough that only the tops froze: the bottoms stayed liquid. 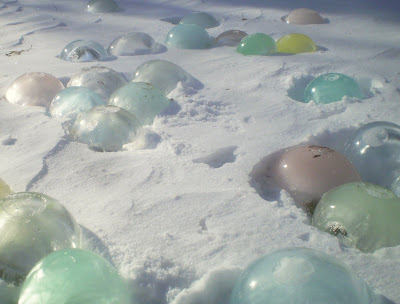 This left me with a bunch of pastel, bowl-shaped pieces of ice, instead of the solid, brightly-colored spheroids I had been envisioning. Also disappointing: the balloons, when popped, immediately gushed water. I was trying to be careful, but I still managed to soak a glove while I was doing this, which was uncomfortable and inconvenient. A wet glove sticks to ice in sub-zero temperatures much the same way a wet tongue sticks to a metal pole, it turns out.

However, there was one good side to this: the colors, disappointingly pastel though they were, were at least all more or less equally pastel, so they still looked like they more or less went together, and the inverted-bowl shape reflected light interestingly, giving them a more metallic kind of look than they would otherwise have had. 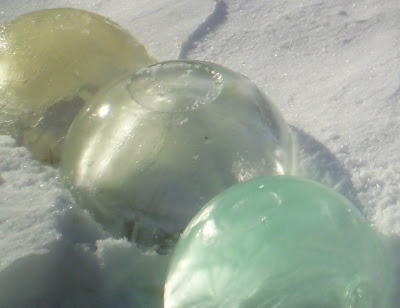 It would have helped if there had been less snow on the ground when I did this, since from a distance, they kind of disappeared under the snow around them (which is why I didn't post any pictures of them from far away). But these are all lessons I can apply to next time. (Yes, I am planning a next time.) And I at least got one cool-looking photo out of it: 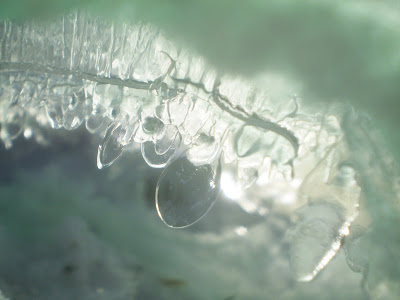 Oh! And! I also, in the process, managed to ruin one perfectly good laundry basket. It turns out that the maximum carrying capacity of a chilled plastic laundry basket is exactly five water-filled balloons. Tempting though it might be, don't add that sixth one: the basket handles will break on you, sending five water-filled balloons skittering around the plant room. The sixth will, of course, land on your white tennis shoes and burst, both soaking them and turning them lavender.

This sounds like a fun thing to do for a party. I think those would have frozen here because it is 11° at the present. If the coloring was in alcohol it probably lowered the freezing temp.

I know you're disappointed, but I think they look really cool. Plus, I never in a million years would've thought to do that. It's just great, I love it!

They look cool. What an interesting idea.

And now you have a spiffy pair of lavender shoes! ;-)

I love the last photo - makes me want to do something just for the photo opportunities.

And I wish I were more awake this morning - lavender shoes is just begging for some Wizard of Oz reference or friend of Dorothy or something.

They do look cool as is, and I imagine that if you had gotten the effect you had intended, it would have been awesome.

I'll enjoy seeing how it comes out next time.

Judging by the pictures they still turned out very pretty. I actually like the delicate colors. Really cool idea!

Love them! They sort of look like Easter eggs.

I think they're very pretty, like bubbles in the snow. I love clean, unbroken snow. We don't get that, with dogs in the yard.

I love them! They do look like bubbles! Do some more, do some more!
I can't make them here though, so I'm relying on you, Mr. S!

That is just tooo great ,I had been waiting .That insulating factor is what keeps some of my garden veggies fresh through the snow :)

Hillarious ! I'm still laughing. I think they look really cool as well. I'm still debating wether to try it myself.

Hmmm, that is actually a rather neat idea. :) One could also experiment with different shaped containers to make a variety of colorful "pebbles"

Awesome! It's like the-Munchkins-go-on-a-ski-trip-land" As for the shoes and laundry basket, I'd run for the nearest hill, hop into the basket and see how many mostly-frozen balloons I could hit. Then I'd try dropping red balloons on the shoes to get optimum color. Good luck for next time!

You should check out Wintercraft.com!

Thoughts on Life and Millinery. said...

I tried that same project.
Just blogged it...it isn't as easy as it looked on Pinterest.

its difficult to get the water in the balloons. my the balloons don't fit over my faucets...Any ideas??