Have You Seen This Plant?: Dieffenbachia 'Tropic Forest'

The website for Twyford International, a tissue-culture company located in Florida, with a separate facility in Costa Rica, lists a large number of plants that are very familiar to me, that we got from Florida all the time when I worked in the garden center. Twyford produces and either holds the patent on, or has applied for a patent on: Aglaonema 'Golden Bay;' (Correction: Whatever Twyford's site may claim, they have not in fact applied for the patent on 'Golden Bay;' that belongs to Florida Foundation Seed Producers.) the Anthuriums 'Gemini,' 'Krypton,' 'Red Hot,' (Correction: Whatever Twyford's site may claim, they do not in fact hold the patent on 'Red Hot;' that belongs to Florida Foundation Seed Producers.) and 'White Gemini;' Microsorum musifolium 'Crocodyllus;' the Dieffenbachias 'Tiki,' 'Tropic Breeze,' 'Tropic Marianne,' and 'Tropic Rain;' and the 'Brasil,' 'Imperial Green,' and 'Imperial Red' Philodendron varieties.

I own, or have owned, all of the above plants except for Aglaonema 'Golden Bay,' and 'Golden Bay' is on my list to get at some point. So the point is that I'm generally happy with the plants Twyford puts out there, save for 'Xanadu,' which is Satan come to earth in the form of a plant,1 plus a fair number of their plants were developed by Dr. Richard Jake Henny of the Plant Daddy blog (Sadly, there's a lot less plant-daddying there lately, and a lot more cars, fishing, and complaining about the weather, but the archives are still worth checking out.2), which makes them special just because I usually don't know anything about where my plants originated, much less their creator's feelings about cold weather.3

So I have been excited for quite some time, since discovering their website, about the possibility of one day owning a Dieffenbachia 'Tropic Forest,' which looks a lot like 'Tropic Rain' in the (blurry, low-res) photo, 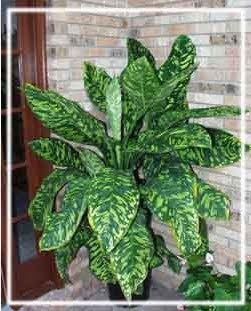 Dieffenbachia 'Tropic Forest.' Photo from Twyford International and used without permission; I will take it down immediately if anyone at Twyford has a problem with this and says so.
but which has a different texture to the variegation which I find more appealing.

And I have waited to see one of these show up in my area, for a couple years now, without luck. Not only have I never actually seen one, but we never had them on the availability lists from Florida. They were never even an option. So finally, I e-mailed Twyford to ask them where they were, and why they had 'Tropic Forest' on their website even though they don't appear to sell the plant.4

The answer didn't help very much; the people who wrote me back basically said that they'd never seen it before either, and didn't think they've sold 'Tropic Forest' in the last two years, and they're sorry the website is so out of date (all the news-clipping and press-release pages end in 2004, and their availability list stops last August). They did suggest some wholesalers I could check with, and I appreciate their being nice enough to answer in the first place, because they didn't have to -- I'm just some guy with a blog who might, if he finds a source, buy a plant or two of 'Tropic Forest;' they didn't really stand to gain anything by writing me back. So this was very kind of them. But at the same time, I'm no closer to the goal of having one of the plants, either.

So the report, at least for now, is: 'Tropic Forest' is a real Dieffenbachia variety, patented and everything, originally created in Australia by Edwin J. Frazer, from a cross between Dieffenbachia 'Birdsey No. 4' and D. 'Marie Selby 79-92,' sometime before January 1995, when the patent application was first filed. Nobody has seen 'Tropic Forest' since January 2007 (the date on the picture in footnote 3) and Twyford, at least, hasn't sold it in the last couple years. Nor does anyone else appear to selll it either, at least not under that name. If you sell it, if you have one you might give me cuttings of, if you've spotted it somewhere, if you know Edwin J. Frazer or are Edwin J. Frazer or think you maybe once talked to someone named Edwin at a party who had an Australian accent and did something with German-sounding plants, for the love of all that is good and holy please e-mail me.5

-
1 Not really. It's true that I have a problem with 'Xanadu,' but the houseplant incarnation of Satan is, I'm pretty sure, Ravenea rivularis, the majesty palm. Maybe poinsettias or Opuntia spp. 'Xanadu' maybe places somewhere in the top ten, though.
2 Also: if the reader will take a close, full-size view of this photo from Plant Daddy, s/he will see some very interesting-looking yellow-speckled experimental pothos in the foreground. There's also an odd-looking vining plant of some kind which I think is either a Philodendron hederaceum or another kind of pothos, with sort of long, narrow dark green leaves and a bright white or cream-colored center, on the far right-hand side of this photo.
3 SPOILER: He's against it. Not overly fond of birds either.
4 (Indeed, the plant doesn't even appear to exist: when I Googled for it, the only hits that came up were for the Twyford site, multiple sites referring to the patent for 'Tropic Forest,' one really good picture, and PATSP, because I mentioned 'Tropic Forest' in passing during the Dieffenbachia profile. Davesgarden.com has a page for 'Tropic Forest,' but it's just a placeholder: there are no photos or comments.)
5 (See the sidebar and follow the directions.)
Posted by mr_subjunctive at 2:30 AM

None of them seem available in the UK but I like the sound of Tropic Forest.

"I'm just some guy with a blog who might, if he finds a source, buy a plant or two of 'Tropic Forest;' they didn't really stand to gain anything by writing me back. So this was very kind of them."

You clearly don't understand the power you wield through the influence of your blog. Marketing is all about generating plant buzz, and you're giving them free advertising. Multiply your plant purchases by those of your readers, and their friends, and their friends' friends....

Though I agree that I really ought to be powerful enough to upend the whole houseplant market with a single post (and if this should happen, I promise to use my powers only for good), I haven't seen much evidence that this is actually the case.

If someone who's licensed to produce D. 'Tropic Forest' sees this post and decides to go for it and start cranking them out, that'd be awesome. But I'd be surprised.

Oh... Almost the right wording from Rejected Cartoon. "For the love of god and all that is holy..."

Also, Mr. S, remember blogalong plants? It might not be a mudslide, but it could add up.

I want this one, which looks like one that I saw at the Botanic Garden today. A little less spectacular, but striking nonetheless!

It looks a lot like D. 'Sterling,' which is out there occasionally. I've seen them in at least two different places near me. D. oerstedii is slightly different in that it has a little bit of speckling away from the midrib (or at least 'Wilson's Delight' does). There's also D. 'Hilo,' which from the picture at the site you linked looks basically the same as 'Sterling' but maybe with a smaller, darker midrib. They're all nice plants.

We(Bryan and Janice) have a production nursery in Qld where we grow the pretty coloured aglaonemas you like and other indoor foliage. We grow them from inported tissue culture and cuttings. We can be contacted at markwellsnursery@gmail.com or markwellsnursery@hotmail.com