As with the Plectranthus x 'Mona Lavender' I wrote about on Tuesday, the Murraya paniculata flowers sporadically all the time, but has gotten really excited all of a sudden, within the last week or so. Possibly the trigger was that I moved it to the watering station and gave it a good soaking and showering a couple weeks back. It's heavy, so this is hard to do, and doesn't happen that often.

In any case. I was moved to write about this partly because the current round of blooming is so intense, and partly because James Missier posted about his plant a few days ago. In that post, he mentions rumors of the flowers' scent being poisonous, which is similar to a couple comments I had after I posted the plant profile a couple years ago -- some anonymous person showed up and promised me a "lifetime of illness" unless I got rid of the plant, and claimed that his/r children were all allergic to it. People are (as we know) sometimes allergic to things, but by the time my anonymous commenter left his/r comment, we'd already had the plant for a year, blooming sporadically throughout, and both the husband and I were fine. I'm not saying that we haven't both been sick for the last three years, just that it seems like the sort of thing I'd remember.

Unless part of the illness involves memory loss, obviously. 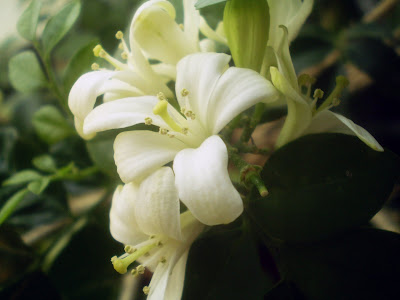 James said in comments on his post that he'd read an account somewhere of a woman who'd found that the flowers' scent triggered her migraines and other ailments. This is certainly plausable: in some sufferers, migraines can be set off by certain scents, and (wikiposedly), some migraine sufferers experience heightened sensitivity to smell too, as part of the aura. (The word aura refers to sensory or neurological signs that precede a migraine in about 20-30% of sufferers; most commonly visual disturbances like seeing flashing lights, blurred vision, or scintillating scotoma, but tingling feelings in the face or extremities, heightened sensitivity to odors, or olfactory hallucinations are also fairly common.) As Murraya flowers have a pretty strong odor on their own, anybody who was exceptionally sensitive to smell during a migraine's aura, or triggered into migraines by strong smells, would obviously be hit pretty hard by it.

So there may be something to this, and it's probably a good idea not to put a Murraya in a store or other public space, because one doesn't want to give other people migraines. At the same time, it's no more "poisonous" or "dangerous," as far as I can tell, than when people wear too much perfume, cologne, or aftershave, or use scented laundry detergent, or whatever. Strong smells can trigger allergies or migraines in certain people. We knew this already.

Perhaps I'm being overly defensive. But I like this plant, and don't want to see people getting scared away from it over nothing. Some people will be allergic to it, and others may find it triggering migraines, but both groups should be relatively uncommon, and if you or someone you live with fall into one group or the other, you probably already know about it and wouldn't be buying a Murraya anyway. So.

And they really do smell nice.

What do the seed pods of this plant look like after they bust open? Are they retained by the plant? I saw a shrub that reminded me of this but had no flowers, just retained open seed pods from last year. It was growing in Portland, OR.

Sounds like a lovely plant to me. The flowers are pretty and I love flowers that have a scent.

Poisonous fragrance .... rolleyes .... what can we say -- some folks aren't too bright.

I've just discovered I'm allergic to the Murraya blossom scent, as we have them growing all around the units I live in and they have been flowering profusely because they haven't been pruned enough. The scent of this is making me physically sick and worsening the asthma I normally suffer from.

I'm curious to know at what stage of the Murraya blossom's life does the scent worsen or become a real problem? Does anyone know?

It's probably not that the fragrance has changed, but that you have. With a lot of things, the body won't react the first time, but gradually develops stronger reactions over time, and I know asthma can be one of those things because it happened to me. (Because I smoked: initially I had no asthma, then I had a little asthma, then I had really bad asthma. Once I stopped smoking, the asthma gradually slowed and stopped too.)

Strong smells, of whatever type, can trigger asthma in susceptible people, so I'm not surprised that Murraya blooms seem to be a trigger for a lot of people. Unfortunately, I don't have any advice beyond the obvious (either convince someone to get rid of the trees, or move away from them).

I am not responsible for your neighbor's Murrayas.

I did not put them there. I cannot take them away.

I don't make them produce a scent.

I am not the reason your brain finds the smell unpleasant/overwhelming.

I am not advocating planting Murraya outdoors.

I have zero power to alter your situation in any way whatsoever.

Please stop leaving me anti-Murraya comments every time you remember my blog exists.