Personal-ish: Good News All Over the Place

At long last, after several months of taking all the plants to the kitchen sink to be watered individually, I can water plants in a bathtub with a detachable showerhead again. The degree of overall life improvement this represents can hardly be overstated. Watering has just gotten much, much faster, because I can now water more than one plant at a time. I can also keep the plants dusted a little better, because now I can spray them down with water without it getting all over the kitchen floor.1 This will also, in theory, keep the spider mites, if not the scale and mealybugs so much, somewhat in check. Also, the rearrangements necessary for installing a shower/tub in the plant room have left me with a bit of open space where, hopefully, the Hibiscus rosa-sinensis that were so terribly afflicted with mites (link) can recover and resprout and stop looking so sad and pathetic all the time. 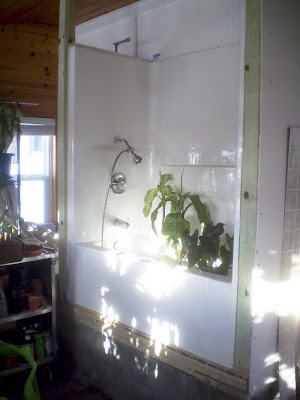 The watering station. Note that it's sitting on a couple feet of cinder blocks, that the shower head is much lower than anybody would ever want a shower head in an actual shower for human beings, and that the temperature-control knob is relatively small. The temperature-control thing is a big, big problem (I spend large chunks of time trying to get a water temperature that's not going to scald or shock the plants.), but the other two things are deliberate. It's also kind of a problem that the faucet controls are all on the left side, but I am right-handed, and this means that if I'm not careful, the connection for the detachable showerhead will knock over all the plants when I try to use it. But this can, we think, be worked around.
And and and -- the whole arrangement is looking significantly better for my back than the scenario in the apartment was before we moved, because the shower is actually raised a couple feet off the floor, meaning I don't have to bend over repeatedly in order to put things in and take things out, which you would think that my back would get used to doing that if I was having to do it a hundred times a day, several days in a row, but it never, ever did.

I am also thinking that maybe the scale on the Ficus benjamina (link to post about the discovery of the scale) may have been misdiagnosed,2 though I bought neem oil anyway.

Also I just bought five new plants semi-recently (mostly succulents: the Coralville Lowe's has suddenly decided to sell plants again, after a long winter where they mostly didn't: it's a welcome development, but leaves me wondering why they haven't had plants before now), which I'll show you later, and just in general things are looking better for me than they have in a while.

Therefore, we should have a Gazania picture, as Gazanias are the Official Celebratory Flower of PATSP, and some of this seems like it's worth celebrating. So voilà: 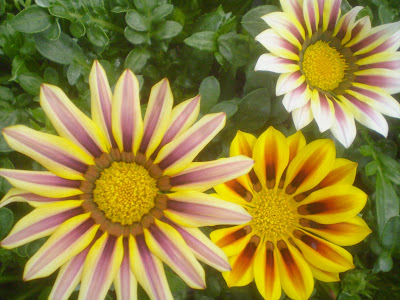 This whole post, obviously, is what you call "tempting fate," but I'm in a good mood now so I don't even care.

-
1 It still kinda gets all over the plant room floor. But less so, and the plant-room floor is concrete, not wood like the kitchen floor is, so it doesn't matter as much if it does. And most of the plant-room plants would be thrilled to have the extra humidity anyway.
In any case, everything always needs to be dusted, because every single step in the home-improvement process so far appears to require generating large amounts of dust, and dust cuts back the amount of light plants can receive, so it's fairly important to stay current on that.
2 I should have taken pictures. I thought of it, at the time, but I figured it was clear enough that it was scale, and I was upset about finding them anyway, and I was already somewhat behind on watering, so I didn't bother. Now I'm wishing that I had, because some stuff isn't adding up -- it doesn't make sense that plants that were very probably never even in the same room together, that were always watered several days apart,a could have gotten scale at the same time. Also 1) I look at the plants every fourteen days: how could a scale problem suddenly appear and get that bad that quickly? 2) How can the Ficus have scale, when the bug-prone plants near it (Dizygotheca, Breynia, Cordyline) did not? (And oh, yes, did I ever look closely.) 3) Since when is it normal for scale to congregate on the tops of the leaves, instead of underneath? And why only on certain specific branches, that weren't even touching one another? 4) Why did I never see any crawlers, only adults? 5) Why aren't they coming back yet?
Plus, I noticed while trying to clean construction dust off of the 'Margarita' Ficus for the billionth time, just wiping the leaves is enough to cause small pinprick injuries that bleed sap, which can dry to a brown, slightly-domed shape that resembles scale, so now the theory is forming in my mind that maybe the Ficus was injured in a widespread but patchy way following a watering, which caused the leaves to bleed sap, which when dried looked like scale.
I don't remember beating the plant with a wire brush or kicking the plant down the stairs -- which if my "injury" theory is correct, something like one of those would have had to happen -- but I do recall there being some sparks flying from a metal grinder being used in the room, during the watering-station install, and I've picked what I believe are melted metal bits out of a plastic pot I was storing in the general vicinity of the Ficus, and in theory that could explain the suddenness and the odd distribution. Also I'm not seeing any new stuff on the Ficus that looks like scale, so maaaaaaaybe it wasn't scale after all.
I'm not sounding the all-clear just yet, and I'm still treating the plant as though it had scale, but the possibility exists that one of my problems has been fixed, and another of my problems was never one of my problems.
The Neoregelias definitely had scale, for sure, still. But things are looking relatively good even there; I've done the alcohol rub-down with them twice now, and the second time I didn't even see anything that looked like scale, so things are looking up on that front as well.
a My plant-watering spreadsheet sorts plants alphabetically by rooms, so during every watering cycle, I start with the ones in the basement, then the living room, then my office, then the husband's office, then the plant room. Which I have only just realized spells "BLOOP." And, within a given room, I generally go in the same order: start at one end of the room and work my way to the other side. The Neoregelias that had scale were at the end of the basement group, and the Ficus was four rooms later, at the end of the plant-room group, so not only is it extremely unlikely that they ever touched one another, it's extremely unlikely that I would ever have touched one and then the other within the same day.
Posted by mr_subjunctive at 2:30 AM

Congrats on the ability to have even more plants, and take the world BY STORM.

weird, i just bought five new plants in the last couple days... mostly succulents from Lowes. i wonder if we got any of the same ones. i have noticed we have similar tastes in plants. probably why i enjoy your blog so much

Hope your back is feeling better now you have that fabulous watering station. I love Gazanias. I will be growing some from seed this year for the garden.

They truly are horridly beautiful. Such a cheery manflower.

Have you done a post on manflowers? Flowers that are for men? Gerbera, Gazania, other such, well, masculine blooms.

I think you'd have a ball doing that. :P

Well, possibly, but -- how do you tell the difference? I mean, do you feel around in the soil or lift up the plant and look underneath or what?