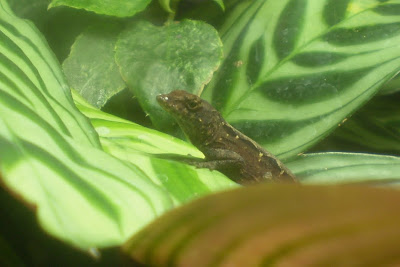 The husband and I had a dog for about an hour and a half on Thursday. Not had exactly, but it lived in our house and ate dog food we bought, so it sort of counts. It happened because I saw this Husky running around in the neighbor's yard, no leash, no people nearby, and I thought, well, if it were my Husky, I'd want somebody to try to find me. So the husband and I went out and called the dog, who came right over to us, and walked in the house like this was a totally normal and obvious thing for it to do, and I called the vet clinic phone number on the tag to see if they could tell me who had lost it.

And they kind of knew -- they gave me a name (which wasn't in the phone book), and they gave me a phone number (which didn't work), and they said the owner's address was given as Fairfield, IA, which is a solid two counties away. This dog was way too clean to have been walking through the snow and slush for fifty miles, so locating an owner looked like kind of a dead end.

So it looked like maybe he (oh yeah -- the vet's office also said it was a he; there's lots of fur on a Husky, so this wasn't immediately obvious) was going to be here for a while. The husband set some water out for him, and went to the grocery store for food, and I just followed the dog around the house as he sniffed everything, repeatedly, partly because it was really novel to have a dog in the house and partly because I wanted to make sure he didn't try to chew any of the plants. And then I tried getting some pictures so I could make a FOUND DOG sign to put up. This was the best one -- 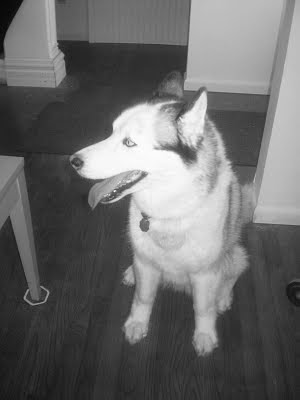 And the thing you have to know here for this story to make sense is, we've been talking about getting a dog for a long time. Since well before we moved into the house last May. Since before we'd even started looking for houses. And we were actually looking for a dog that was about this size (thinking more of a German Shepherd, but whatever, the Husky was already trained well enough to know "no" and "sit," at least, so he was probably housebroken already too, which is a huge plus). So I was kind of hoping we wouldn't be able to locate an owner, and I'd already started blogging about him in my head, how he, like Nina, had just shown up and been taken in, and it was all going to be very heartwarming. You'd have laughed, you'd have cried, you'd have learned the true meaning of St. Patrick's Day.

Asked the neighbors, when they got home, if they had any idea who in the neighborhood had any Huskies, particularly any Huskies that might be interested in investigating their yard, and, long story short, they did know somebody close by who had recently moved up here from Fairfield to live with family, and who had a Husky, so the neighbors went to ask them if they had a dog missing, and of course they had, and so then within a few minutes our dog was running over to his actual owners, who were repeatedly grateful, and that was the end of the whole thing, it would appear.

Now. We can hope that the dog remembers that if he runs away from home and comes to us, we'll give him tons of attention and feed him and play with him and pet him and all kinds of fun stuff, and maybe he'll just keep running away and coming to us until the real owners throw up their hands in exasperation and say fine, he's your dog, he obviously likes you better, we don't want him anymore, but this is probably unrealistic.

So there's a pretty good chance that you're going to see a brand-new dog show up on the blog here sometime in the next couple months. Just 'cause . . . you know.

I mean, we have all this dog food already, and it'd be so wasteful to throw it out.

I mean, maybe not. But we're at least probably going to be looking harder. To date, we've only gone to the animal shelter once. But that might be happening quite a lot more for a while.

It's sentences like, "You'd have laughed, you'd have cried, you'd have learned the true meaning of St. Patrick's Day." that make this blog so awesome. Sure, I learn a ton about plants, but you crack me up in each post!

That was hilarious! Well, I certainly look forward to any future canine stories you might put up.

Hope that you guys do end up adopting from a shelter. Og knows, there's plenty of animals scheduled for early demise out there. :\

Aww, so sweet! I love a good dog story even though it doesn't have the right ending, for you guys, yet. Hey, how about adopting a greyhound? (plug, plug)

What a gorgeous dog! No wonder you wanted to keep him. I'm glad you found his owners, however -- he would have missed them.

I have two I have found on Petfinder, my lucky dogs!

Yeah, I know. We've already been looking there for a while. Haven't moved forward on any adoptions yet partly because there's still construction going on, and there's a general disarray kind of deal, but I may not be able to wait much longer, now that this has happened.

Also there's a ginormous black lab / newfoundland at the Iowa City / Coralville shelter who'd be way the hell too big and excitable, and probably a really bad idea all-around, but I'm kind of smitten.

Aww - he reminds me of Baloo, who kept escaping his owner and coming to my ex-workplace. He was part husky, and soo cute. I'd totally have stolen him if he hadn't been too big to smuggle out easily, and if we hadn't already been sharing our much-too-small place with a cat.

Black lab/newfoundland in our neighborhood. Way the hell too big, yes. Exictable no. Newfies don't get exicted about anything. But wait 'til HE takes YOU for a walk!

Never say Never.. Our first husky, Amber kept "running away" to our house and ended up living with us till she went to live in Alaska with rehab friends , and our second husky, Lady, wondered onto the property and we never did find her owners, we had her for 8 and 1/2 years before she passed... Husky's are like cats they tend to chose who they want to be with. and they are just all around great dogs..
Now a well trained Newfie would be a great asset . They love to have something to do and are great at pulling about carts and wagons and because of this are quite helpful to have about too. Not to mention all the free loven's some of them give in the way of wet sloppy kisses..lol

Nina is just too cute!

Don't tell Nina, but I was so curious about the dog that I read the whole post without looking at her picture. There. Went back and looked. She is her usual "ready for my close-up" self!

Sled dogs are independent and often run away. A friend with a Samoyed spent years picking her dog up at other people's houses, where he had dropped in. He was usually being fed steak by the fireside when she arrived.

You're good guys to take care of the wandering pooch!

Huskies are AWESOME! Btw, in your doggie searches, it might behoove you to also check out some of the various canine rescue organizations.

I can just see Mr. Subjunctive taking a decoy plant with him on his dog search, because, you know, you want to make sure that the prospective dog won't decimate your plant collection :)

Nina's "Garden of Eden" moment, surely! And I know exactly what you mean about getting the dog now and to hell with it. I'd been planning to wait after buying this place until I had enough money to fence the (one-acre, stream-split) yard before getting a dog. And I did wait... until a "half-golden retriver, half-Irish setter, 1 1/2-year-old female needs good home" ad appeared at work. I called immediately, but was at least #17 on the list. But by then, the switch had flipped. We're now on dog #3 and I still haven't been able to afford that fence! But if I could just put in a good word for black German shepherds...