This plant used to be Brassavola digbyana, but I have it on fairly good authority that Rhyncholaelia is correct. If nothing else, whoever wrote the tag for the orchid show (this is another one from the show at Wallace's Garden Center a couple weeks ago) thinks that it's Rhyncholaelia.

I found a lot more about this particular orchid than usual, mainly because of this page, which is just chock full of interesting information. 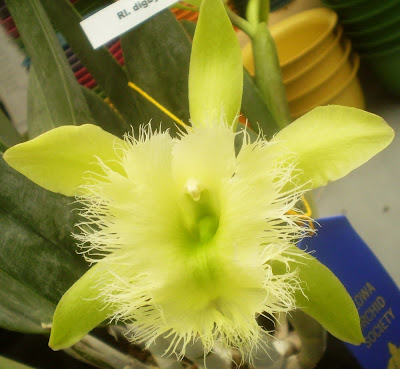 Among the fun facts to know and share are:

It's the national flower of Honduras. Which is kind of astounding, considering the choices available to Honduras. I mean, you'd think they would go with something a little more . . . colorful.

It's where the "B" in "Blc." (Brassolaeliocattleya) comes from. I'm glad I learned this, because I'd been thinking that Blc. was Brassia x Laelia x Cattleya, just 'cause that's what I misread the first time and then I didn't bother to read closely thereafter. Obviously with the name change, Brassolaeliocattleya should probably be Rhyncholaeliocattleya now, but I have no idea whether they're going to bother to change that. Probably. The main contribution from R. digbyana to Cattleya alliance orchids is the lip: flowers with super-frilly lips probably have this plant somewhere in their background.

The flowers are said to be lemon-scented. I didn't notice this personally, but Wallace's was so full of scented orchids, and also people (who were also frequently scented), that I gave up on trying to match scents to flowers.

There's more than that, though. Check the link. It's an interesting plant.

Technically I think the names of the intergenics using that particular species should have changed (I have an Epc. that became a Gcy. after both its parents were reclassified - Not all Epc.s were affected by this name change), provided that people know exactly which species went into the cross and all growers and sellers are keeping up with the name changes.

Fun! I looks like torn fabric. I agree, something more colourful is in order. You should start a petition.