Shebarfs maintained her every-four-days barf quota on Wednesday. No carsickness, no excitement, nothing unusual food-wise, just suddenly, a pile of barf appeared on the floor. We're contemplating further dietary changes. Maybe she's allergic to something in the dry food. Maybe I'm feeding her at a bad time of day. Maybe I'm feeding too much. There has to be something I can change. This can't be normal. Please tell me this isn't normal.

Aside from that, and an unfortunate roll in poop that was over before I realized it was happening (and a subsequent bath -- which, by the way, the plant-watering station makes a very nice dog-bathing station too), things are good.

Giving Nina the Saturday morning Sheba and/or Nina picture (or SMSAONP) this week, just because she's been feeling neglected lately. I particularly like this one full-size. 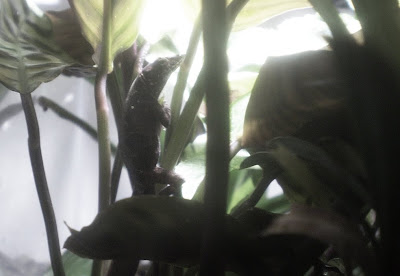 Remember me, Mister Bond?
Posted by mr_subjunctive at 2:30 AM

I had a cat once with similar stomach problems as Sheba. The vet believed her diet caused it. After trying different types of food, I finally found something that agreed with her and things got better. My cat did toss up her cookies once in awhile but not often enough for it to be a big problem. I hope you find a solution to Sheba's problem!

Glad to see that Nina got her picture of today! I've missed seeing shots of her.

I have two big dogs and they do throw up occasionally. I am not sure what will help but trying new food might. One of my dogs has a corn allergy which is apparently pretty common so you might try a brand without corn. These kind are usually only found at pet food stores. Another problem that some bigger dogs have is bending over far to eat, you might try putting her food on a tray or something so it is more at her height. Gravity might work in your favor that way!

One other thing you might try, is mixing some water in with Sheba's dry food. If she eats too quickly, the dry food swells up and might make her too full too fast. If you let the dog food sit in water for a little while, it will "pre-swell" and not cause so much pressure.

I know very little about dogs, but maybe she has parasites? I might have missed you saying she has been checked for it, and if it is the case I'm sorry my suggestion is useless, but it's what pooped in my mind today while I read your post. And by the way, Nina has a sweet round belly, I love to see her!

Great pic of Nina! Looks like she's about to draw a gun and fire on one of the crickets. :)

Allergies could be the problem; her dry food contains wheat, rice and corn (besides various animal products).

I was adding water to her food for a few days, and she seemed to like that fine, but then she stopped eating it entirely, which was what led to the having to "cook" for her with the wet / dry mix.

Well, the shelter said she'd been checked and wormed and all that before they let us adopt her, and I believe them, so if there are parasites, they're something she's picked up since we've had her, and she's been throwing up the whole time.

Allergy or a sensitivity might be the case -- my young Boston was sensitive for a while. Now I have her on Pro-Plan Salmon (a dry food) and have no trouble at all.

Having said that, throwing up now and then is a normal part of being a dog. It doesn't always mean there's a problem. Actually, what's weirdest is some of the things dogs will eat and NOT throw up. You don't wanna know.

I had to wait to ask my husband, since in the 7+ years that I was in their lives, I don't remember Jenny or Laces ever throwing up. He says that it was very rare for them to vomit as young dogs.

I think it is definitely something worth asking your vet about.

Some dogs vomit more often than others - probably due to sensitive stomachs. But no, it's not normal to vomit every four days.

- Does she eat grass? Mine do, and it often results in vomiting after a while. Ditto with sticks and bits of wood.
- Does she eat really fast? If yes, wolfing it down could be prevented by throwing dry kibble on the ground and letting the dog hunt each piece separately.
- Does she get bones (raw or artificial chews)? Too much of these often makes my dogs vomit.
- Sometimes mixing kibble and "moist" food (like meat and especially dairy products) causes stomach problems, especially if the dog isn't used to it.

Finally, I'd ask the vet for advice, but I'd also remember that veterinarians make a lot of money from special canine diet formulas available at the clinics. They might well try to sell you an expensive bag of kibble that you don't really need.

I suspect I already know, to a degree; she's very good about not chewing most things, but she does sample from the floor occasionally. One of the original theories about the vomiting was that perhaps she was getting too much drywall dust in her diet. And I know there's a certain amount of bark, perlite, peat, etc., because there's always some dirt on the floors from when I move plants around to water, and I've seen her eat it before.

She eats grass sometimes; two weeks ago there was a day when she wouldn't touch her food but ate all the crabgrass she could find instead. I haven't seen her do it lately, though.

She does eat extraordinarily fast. We've timed it a few times. She gets fed twice a day, slightly less than two cups of food each time, and can eat it all within two minutes. When she's thrown up, though, it's usually not anywhere near the time she's eaten. I mean, it's not like she eats and then throws up thirty minutes later. Last Wednesday, it was more like, she ate, we went for a walk, she napped, and then she threw up four or five hours after eating breakfast.

She has a rawhide chew but doesn't seem very interested in it (Fervor, on the other hand, was crazy for them); the husband gives her Milkbones to bribe her into her crate at night (though that's less and less necessary; she gets in spontaneously now) and after walks; I give her treats less often, maybe once every two or three days. There was one brand that we were pretty sure was causing her to throw up -- a jerky-type snack -- but we haven't given her those in over a week now.

Just consulted the journal, and from the record there, Sheba has thrown up on six different occasions since she's been here:

Which, put like that, it doesn't look so bad. Though I'd still like to have some idea what happened on that last one.

Dogs do puke a lot compared to humans, but I agree with others who say this seems abnormally frequent. Food allergy seems like a decent bet since you've ruled out many of the other common causes.

From the timing of her pukes it sounds like eating too fast isn't necessarily the problem, but I know how positively disturbing it can be to see a dog "wolf" down a meal. The two tricks I've used to slow down crazy-fast eating in the past are, as Paivi suggests, scatter the food on a clean patch of grass in the back yard and let her hunt for it. Or, simply put a couple biggish bones or a tennis ball in her food bowl with the food. She'll have to eat around the obstacle and I've found it to be a surprisingly effective way of getting dogs to eat at a less disturbing pace...