I'm seeing tons of trees in bloom on the walks with Sheba lately, and some of them, in fact, have already peaked and have moved on to the next thing. So I figured if I were going to use the photos I've taken -- and I have way too much time invested in the photographing, selecting, cropping, and color adjusting of the pictures, at this point, to want to file them away just because they're no longer timely. So you're going to see them whether you like it or not.

I don't know what most of these are. Sometimes I'm pretty sure I have a genus, but that's about it. I'm not the tree guy. I don't have to care. 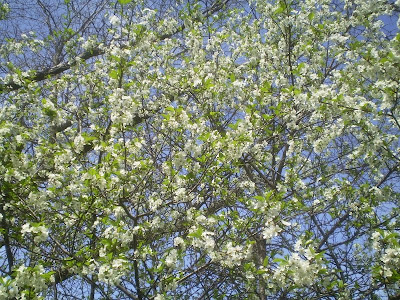 Tree number 1. I'm moderately sure this is an apple or crabapple (Malus sp.).
UPDATE: No solid consensus has emerged in the comments, but I'm more inclined to think Malus than the other suggestion, which was a plum (Prunus), as Malus would be the more common tree around here, and this more closely matches the fuzzy image in my head of what apple blossoms look like than any of the other flowers in this photo set. 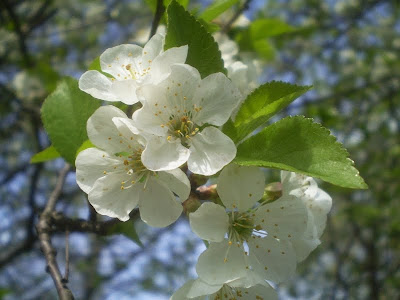 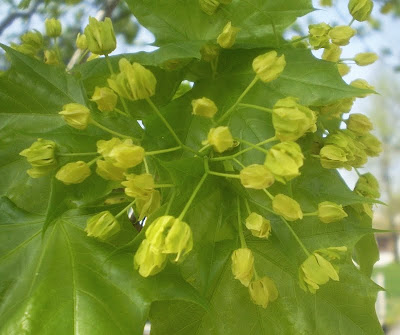 Tree number 2. The leaves coming in behind the flowers give it away as a maple of some kind. (Acer sp.)
UPDATE: Fairly definite consensus from the comments that this is a Norway maple, Acer platanoides. 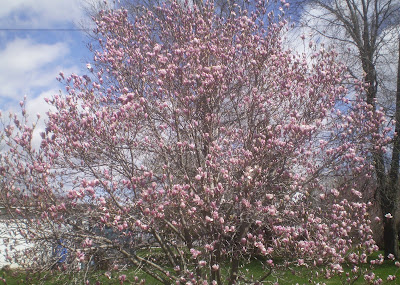 Tree number 3. Pretty certain this is a Magnolia of some kind.
UPDATE: And people agree. Possibly Magnolia x soulangeana. 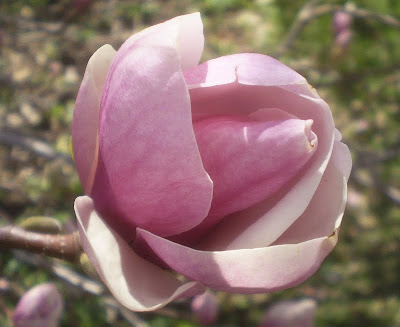 Close-up of a single flower from tree number 3. 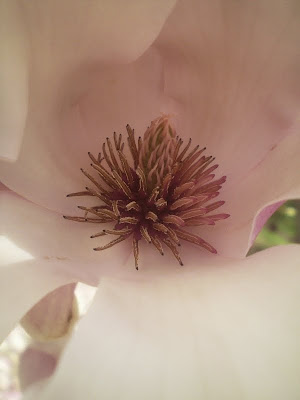 Really really close to a single flower from tree number 3. 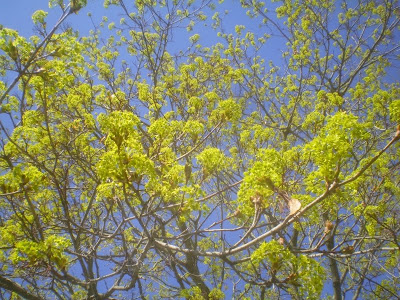 Tree number 4. I have no idea. Not even a guess.
UPDATE: Also thought to be Acer platanoides, though I would not have taken #2 and #4 to be the same species, so something about this ID is not setting well with me. This picture is somewhat earlier in the season than the photo for #2, so maybe this changes into that and they're the same tree. 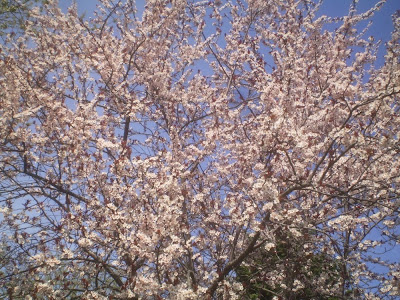 Tree number 5. I'm pretty sure I ought to know this one, but I don't. Cherry (Prunus)? Crabapple?
UPDATE: Seems to be Prunus cerasifera (confusing common name: cherry plum, purple cherry plum), perhaps the cultivar 'Nigra.' 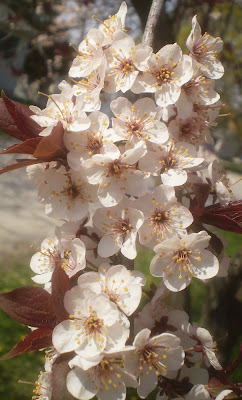 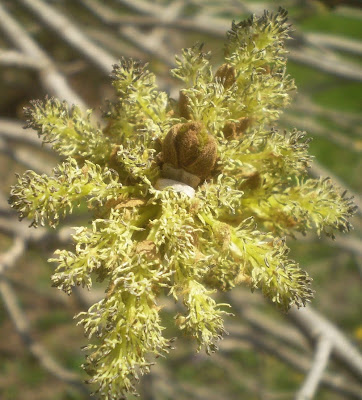 Tree number 6. No clue what it is, but the flowers are wicked cool.
UPDATE: Perhaps an ash (Fraxinus), maybe even specifically F. excelsior, though nobody sounds terribly confident. 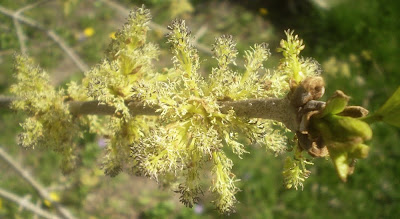 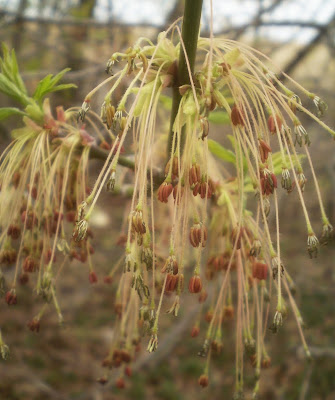 Tree number 7. I don't have a guess on this one either.
UPDATE: Pretty definitely Boxelder (Acer negundo). 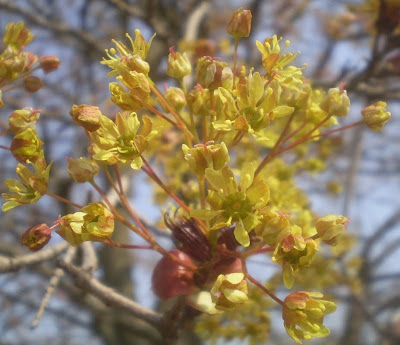 Tree number 8. I suspect a maple again, but I'm not sure.
UPDATE: Yep. Probably a maple. I'm thinking it might be another Acer platanoides, maybe 'Crimson Sentry' or some other dark red/purple cultivar. There appear to be a lot of those around town. 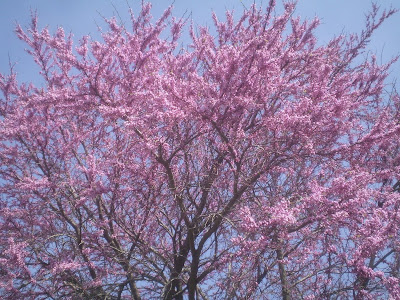 Tree number 9. Or maybe this is cherry. Or dogwood (Cornus). Crabapple? I don't know.
UPDATE: Probably a crabapple, Malus sp. 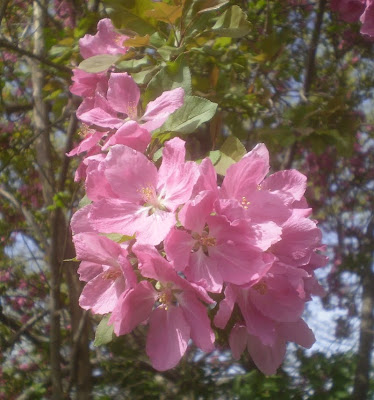 Close up on tree number 9. 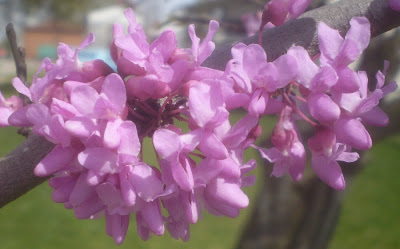 Tree number 10, I'm pretty sure, is a redbud (Cercis sp.).
UPDATE: People agree; Cercis canadensis.
If anybody can help with my embarrassing case of tree blindness here, it'd be appreciated.

Thanks to everybody for their suggestions; if any commenters want to weigh in on the still-not-entirely-resolved cases of #1, #4, or #6, beg to differ strongly with any of the others, or just want to tell me the pictures are pretty, feel free.

#4 May be a Norway Maple, Acer platanoides

#7 Is another Maple, Acer negundo, and a bit of a weed.

I think #1 might be more likely some kind of plum (Prunus.
#4 looks like a maple to me.
#5 - Reasonably sure this is another Prunus, maybe P. cerasifera 'Nigra'.
#6... maybe Ash (Fraxinus excelsior)? But that's really just a guess.
#9 Some kind of apple.

#3 is definitely a saucer magnolia.

#5 is definitely a Prunus and is probably one of the purple-leaved cultivars of P. cerasifera, myrobalan plum

#6 I'm guessing that this is an ash, Fraxinus sp.

What's fair about this, I want to know? Here I am waiting for anything more exciting than pussy willows. I'll give you a heads up on one you don't have yet but will (should?). Watch for the sassafras - there's one that's made for the tree-blind, no one could mistake those leaves for anything else. Thanks for the pictures, it gives me a preview of coming events.

#5 looks like a flowering plum of some sort, like everyone else said, lol. Does it smell kind of bitter?

Sorry. I didn't mean to give you flower envy.

I doubt I'll see sassafras around here; I may be tree-blind, but I think I'd have noticed one of those, if there were many around. We may be too far west?

Didn't get close enough to check. There were bees, and Sheba was darting at squirrels, and I tend to feel kind of wicked conspicuous taking pictures of people's yards anyway, so I didn't notice a smell. Checking with davesgarden.com did make me think that yes, it's almost certainly a Prunus cerasifera of some kind, as Ivynettle and Don said.

They are all prunus. There. Short and sweet. Solved it. Batta bing batta boom.

You're not really a tree guy either, are you?

I didn't see Ivynettle's post till after posting mine. If #6 is an ash, it's unlikely to be the European species Fraxinus excelsior, which isn't commonly planted in the US, and according to the USDA PLANTS database of native and naturalized plants (a very useful reference for some of us, I use it all the time http://www.plants.usda.gov/java/profile?symbol=FREX80 ) doesn't appear to have naturalized west of Ohio and Kentucky. Much more likely is F. pennsylvanica and F. americana, both of which are native to Iowa and both of which are commonly planted shade trees, easily available in the nursery trade.

Which would explain why it looked sort-of, but not completely familiar. :)
I thought, after posting, that I should have checked if F. excelsior even grows in the US, but was, to be honest, too lazy.

#1 still looks more Prunus-y to me than Malus-y, but then again, it's hard to tell without seeing the tree "in person".