I seem to be asking a lot more ID questions this spring than in previous years, but I guess that's sort of to be expected. Previously, I was in a place where everything was labeled, usually, so I didn't have to ask. If these walks with Sheba continue long enough, I will eventually know the identity of every single plant within a 1-mile radius of my home. 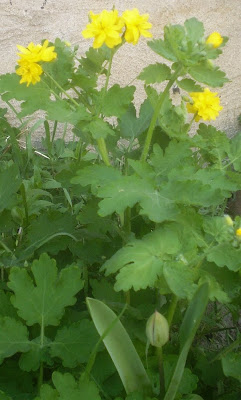 This looks like it was deliberately planted next to a building (actually there are buildings on all but the north side, and the north side has lots of trees across the street, so it'd get almost no direct sun). I think it's deliberate because there were also tulips there, and then because it obviously has certain ornamental qualities. 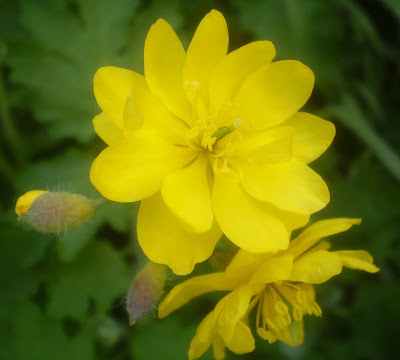 Also, since I originally set this to post, I've run into another group of them, which were definitely deliberately planted, and also more or less in shade (possibly some western exposure for the second ones). Which makes me more certain that it's a deliberate planting.

That's about all I can tell you about the plant, but I took more pictures and some of them were nice, so here you go. 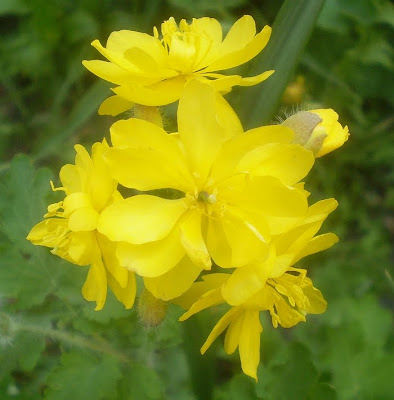 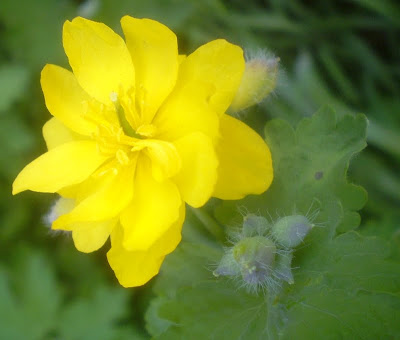 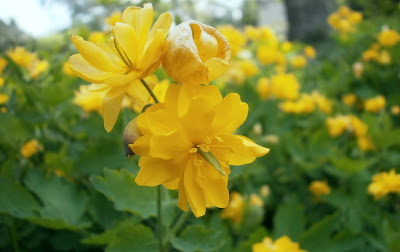 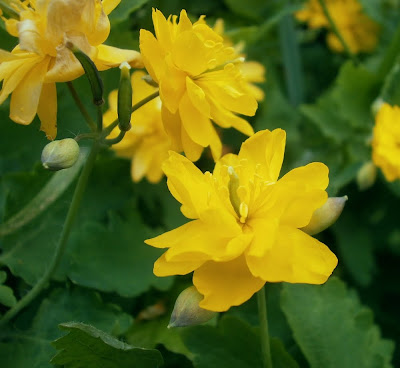 That is a wood poppy.
The botanical name starts with chelone...
I am trying to eliminate it from my garden and so have deleted it off my plant list.

It can sure multiply in both sun and shade via seed. It has a nasty habit of having too few flowers for the size of the plant IMHO, and a unforgivable habit of staining my clothes permanently with yellow sap if I try and pull it out.

I read somewhere the sap could be used as dye.
I wish it would die. Til then I hoe, hoe, hoe!

Chelidonium majus, the greater celandine, a double-flowered form. I agree with Anonymous' comments. A naturalized European plant, formerly used medicinally, and now a common biennial/perennial weed. I was pulling some out only yesterday.

PS If you covet this for your garden, consider growing our native wood poppy, Stylophorum diphyllum, instead. Looks very similar, but with much bigger and showier flowers, and though it will seed around, it doesn't make a pest of itself through excessive self-seeding.

I got the botanical name wrong on the last post.

Definitely a double wild poppy. I think it's kind of pretty (says the girl who doesn't have it taking over her yard ;) )

Thanks. I'm really surprised it's not a deliberate cultivation. I mean, I get why people wouldn't want it, it's just that most stuff that looks like this would be flying out of the garden centers about now. Especially with the doubled variety and everything. (I don't remember where, but something I googled -- Wikipedia? -- said that both single and double flowers are found in the wild.)

I haven't seen the double -flowered form in the wild, though I'm sure it's as capable as naturalizing as the wild type.

I've seen seeds of the double-flowered strain offered for sale. The patch you saw might well be cultivated. But if it is, it probably was planted by an inexperienced gardener who now regrets his/her choice.

I haven't seen a double variety either. I've always called it a woodland poppy...

this should be Chelidonium majus 'Flore Pleno'.