Thought maybe it was time for an update on the Anthurium seedlings again. For those who don't know the story, I bought an Anthurium andraeanum 'Pandola' a while back. It had apparently been pollinated, because it formed berries. I planted the berries and got sprouts, which grew into seedlings, and then half the seedlings died in last Feburary's Great Fernlet Dieoff because of the accidental introduction of some kind of mysterious and evil buglike creature.

The surviving plants were eventually transplanted into regular soil, and have been living with some Begonias in a plastic dome for the last couple months. So far, they appear to be doing okay, though I don't know for sure if this is how they're supposed to look at this point -- they seem pretty tall and leggy, for Anthuriums. More light, perhaps? 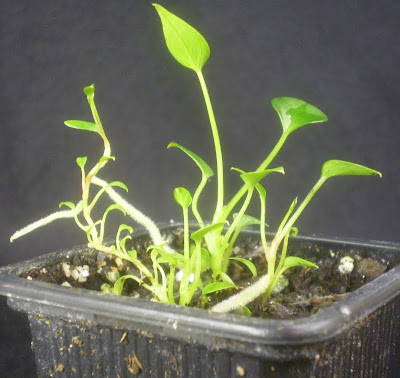 For scale: the pot is about 2 inches (5 cm) on a side.
Still, though, they're beginning to be recognizable as Anthuriums, and they've got some pretty serious aerial roots going on now (the white fuzzy things growing more or less horizontally, in the picture). Which seems more or less right, as I think they're semi-epiphytic. The seedling on the far left doesn't look quite right, but the others seem more or less happy, and I think one or two have even offset already.

Awesome! I still haven't purchased an Anthurium. Perhaps I'll wait for yours to get bigger. :P

I'm sure that the legginess is a normal behavior to survive in the rainforest, but I guess you gould try a little more light. Please don't overdo it though! This is too cool!

With their hybrid background, the leggy one might be some interesting variation. Maybe if you gave it something to climb, see if it takes off? I agree with Rainforest Gardener, it's quite cool.

That's pretty cool. Like Anonymous said, if you are patient it could be interesting to see how these offsprings of a hybrid plant will compare to the parent.

I acquired some seeds from a species Spathiphyllum a while back and I've been waiting now a couple of months for them to sprout, but still nothing. They must require some kind of treatment, but I haven't taken the time to research germination methods. It sounds as though these Anthurium of yours didn't need anything special.