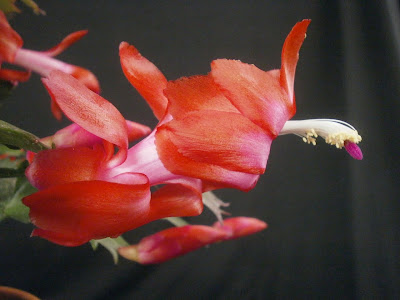 I've posted pictures of 'Caribbean Dancer' before, more than once, even, but felt obligated to post some again because my plant is putting on quite a show all of a sudden. Or not "all of a sudden" -- I don't think Schlumbergeras do anything suddenly except drop buds -- but you know what I mean. There have been buds building for months, and finally they started to open around mid-April. I think the peak is basically now, but there are still plenty of buds left, so I could be wrong. 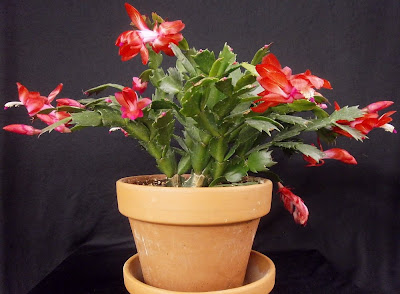 These are the same plant, a few days apart. The picture above was taken indoors on I think 29 April, and does a better job of showing the overall shape of the plant, but the color reproduction was better on the picture below, which was taken outside on May 2. 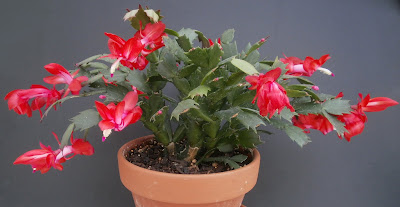 The timing is a little off: normally Schlumbergeras are supposed to bloom around late November, with maybe a smaller bloom in March or April. Close enough, I suppose, but this is definitely a bigger bloom than I got in November. 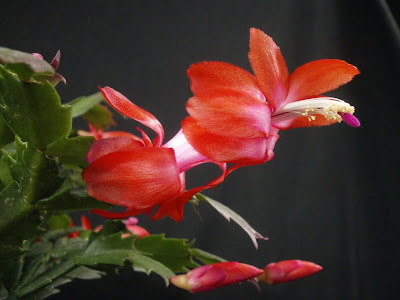 How did this happen? Well, after the pathetic November show, I moved the plant from the north window it was in to a prime spot in the southwest corner of the plant room, where it gets light from both the south and the west windows. (It's obstructed/filtered light in both cases, but still, there's a lot of it. Many of the other plants are extremely jealous.)

Also, when it stopped getting ridiculously cold outside at night, I stopped heating the plant room, which means that the temperature likely dropped a bit, maybe into the low 60s (F; this would be 16-17 C) instead of around 70F/21C like I'd been trying to maintain it during the winter. This, it happens, is just right smack in the middle of the temperature range recommended by the Cactus and Succulent Society of America, in their page about Schlumbergera, and happened at more or less the exact right time of year, too. (Schlumbergera decide when to bloom partly based on how long they're dark at night; they need a night around 12-13 hours long to set buds. In the fall, this would happen in late September into October, and the blooms appear in late November; in spring, the night length is right in February and March, with the flowers appearing in April.) So it was all sort of an accident, but I was lucky and did everything correctly, it would seem.

I've read that cool temperatures potentiate the night-length requirement for setting buds in these plants. So within limits, cooler temps means less stringent requirements for night-length.

Looking gorgeous, Mr. S.! I'm jealous, mine have all bloomed long since. But at least I can enjoy yours vicariously!

At least one of mine is preparing to bloom too - recently moved it out to the staircase window (no heating, no artificial light) after I'd freed up some space there. But that plant has hardly any roots left (oops... broken-down, compacted soil and apparently too much water) - I just hope it'll recover. We've been through a lot together.

I used to have quite a few of these and forced them to flower quite easily. I would water them every day for a week (yes, they'd be very wet), and then stop watering completely. Buds would set and then I'd resume normal watering regime again.