I'd pretty much thought that the last batch of tulip photos would be it, but they keep coming up, and I keep taking pictures of them, so I have another batch to show. Plus, everybody likes tulips. So.

This first one I really like: it's pink and orange at the same time. I've seen them in a couple different places around town. 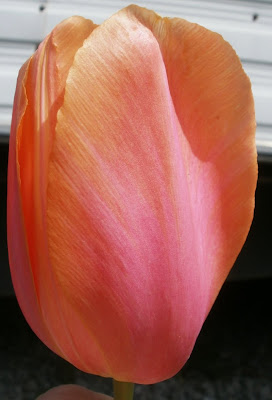 And then another flower of the same (?) variety, from a different garden: 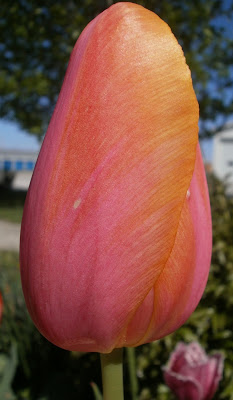 It took me forever to get a decent picture of a yellow tulip. They're all over the place, but people have this thing about planting yellow tulips right next to their house, usually under a window, and I do not want to have any conversation which begins with the question "Why are you standing outside my five-year-old daughter's bedroom window with a camera?" 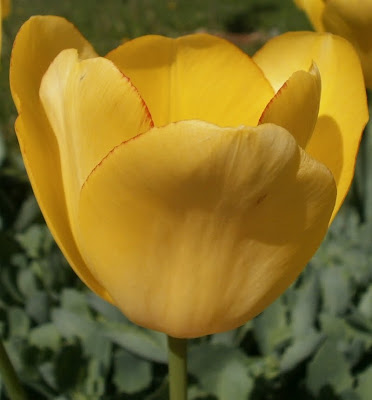 I see a lot of purple tulips around town too, but mostly they seem to be going for a darker, more somber kind of purple. Nothing wrong with that, but this guy's lighter hue stands out and seems somehow more appropriate to the season. 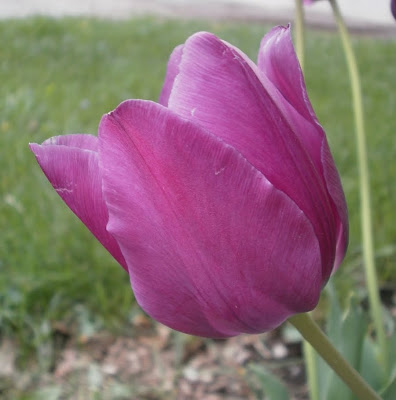 And yet another reddish one. It isn't the greatest photo; it was overcast when I took it, and the colors all wound up kind of washed-out. I did the best I could to get them more or less the way they appeared in person, but it kind of didn't work. 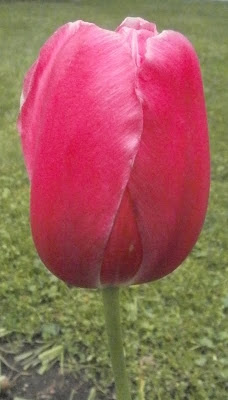 Only a couple houses have "black" (actually more of a very dark red-purple) tulips. This particular one is planted in a tire, which you can kind of see in the photo, along with some Virginia bluebells (Mertensia virginica). The combination works surprisingly well, in part because the color of the tulips and the color of their "planter" echo one another. This is possibly the first "black" tulip I've seen since reading about them in Michael Pollan's The Botany of Desire. (I bought some 'Queen of Night' bulbs in the fall of 2007, along with some hyacinths and maybe something else, for a planter on the landing outside our apartment door, but nothing came up; I never figured out why.) They are, indeed, pretty dark. 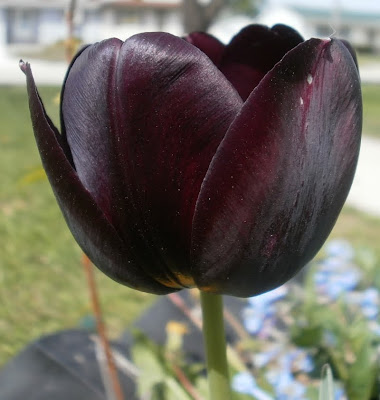 "Parrot" "Fringed" tulips, those with fringed petals, don't seem to be very popular: this is the only one I've seen so far. 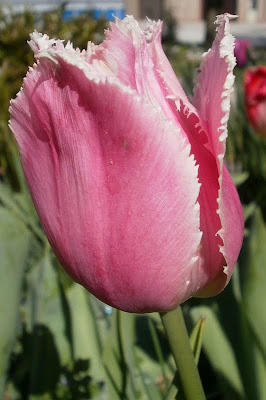 And, finally, another sighting of the highly-coveted (by me) viridiflora tulips. (I've actually seen one other one, a white one, but didn't take a picture because it was deep in someone's yard and Sheba can be trusted not to trample stuff only up to a point.) 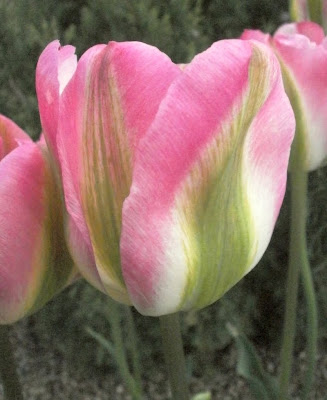 In this particular case, I even know the cultivar name, because the tag happened to be there. This is Tulipa 'Greenland.' Of more interest to me than the name is how and why the tag happened to be there. (It looked like it was just lying there on the ground, not stuck upright into the soil. Except there's no way it could have just been laying there since last fall, not after the wind and the rain and everything. But if it had recently been dropped there, that doesn't make any sense either, because why would you put the identifying tag for a plant down after the plant had already come up and bloomed and was obviously whatever it was? Isn't that when you least need a tag telling you what the plant is? And even if you were going to try to mark the spot, you'd still want to push it into the soil vertically to keep it from blowing away, right? So it's a mystery.) 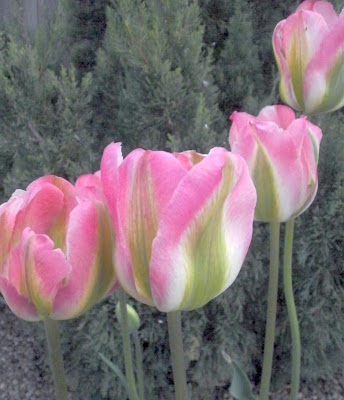 Mr. Subjunctive, the pink fringed tulip is a fringed (also called "crispa") tulip, and not a "parrot" tulip http://www.theplantexpert.com/springbulbs/TulipIntro.html

About the failure of the tulips in your planter: Few plants that are hardy here (USDA zone 6) can survive the repeated freezing and thawing that the soil in an uninsulated container undergoes over a winter. In the ground, the soil temperature a few inches below the surface is surprisingly stable, and rarely goes much below freezing. In a planter, the soil temperature is much closer to the air temperature, which means it gets a LOT colder, and it fluctuates widely.

I'm extra fond of viridifloras, and had a big patch of 'Greenland' at one time. I can't really get into the dark purples, but the bulbs we used to sell as a fundraiser had a mix called "Shock the Neighbors" which sounded awful to me - orange and purples - but it got rave reviews from everyone who gave it a try. My problem is rabbits, if the voles don't eat the bulbs the rabbits just wait for the flowers and motor through them. Cute bunnies!

I love your tulip pictures and the memories they bring back to me! "Thanks for the memories" is definitely appropriate here.

You've got to love tulips! The fringed one is very cool. We just grow plain jane varieties in large quantities for a big bang, but I'm starting to think I'd like to have a dedicated spot for some oddballs. We'll see what my priorities are this Fall, when bulb-planting season comes along...

Ok, I have got to ask this. (And please put a curious tone to the question, rather than a belligerent or rude tone. Is it considered acceptable in US to walk into people's yards to take pics? Other gardeners whose blogs I follow also seem to photograph plants in yards they pass while out walking.
Here in New Zealand I have to say we would either go and knock on the front door and get permission (even if it was in the front yard), or risk the police being called to find out why we were loitering about on someone's property.

I don't know that there are exactly any rules about it, one way or the other, but from having grown up in a small town in Iowa, my assumption has been that so long as it's clear to anybody watching that that's all I was doing (not cutting the flowers, not taking pieces, not trying to photograph anything inside the houses), it's probably fine. I have no doubt that I get watched a lot from windows, cars, etc., so I try to be as obvious about what I'm doing as I can. I also pretty much stick to stuff that I can photograph from the sidewalk, street, or alley, or at least within a couple feet of same.

I've taken pictures of flowers in others yards, but only from the sidewalk. I never venture into the yard. I'm sure people are curious, but I've never had anyone make any comments about it.

Thanks for answering. I'm thinking maybe we New Zealanders are more territorial about our yards than you folk. I love your blog and am glad I followed a link to it one day.

Gorgeous flowers! I really love tulips. Anyway, thanks for sharing this post. I enjoyed reading it. Keep posting.