These aren't quite roadside flowers, in that I didn't take the pictures along the sides of roads, but the spirit is there, because they're weedy and yet also sort of pretty, or at least interesting. It's unclear whether or not there will be roadside flower pictures this summer, because until the car's air conditioning is fixed or it's an unseasonably cool day, I don't see myself going anywhere I don't absolutely need to go.

But anyway. I am like 99% sure that this first one is a Euphorbia, but I can't figure out which Euphorbia. At first I thought it was the invasive leafy spurge, E. esula, but the more I looked at pictures of E. esula on-line, the more the bracts on this plant seemed a little too rounded, and the flowers too dense. Also I saw some in someone's yard that looked like they could have been planted there deliberately (it was kind of ambiguous; they were in a couple spots around the trunk of a maple tree, which could have been deliberately placed to look natural or naturally placed in a way that happened to look planned). So then I was no longer sure. In any case, they were all blooming in April at some point, and although these particular plants have since all been mowed down, I think they're kind of neat.

The first two photos are a couple weeks before the last three, which is why they look different. I'm pretty sure they're the same plants. 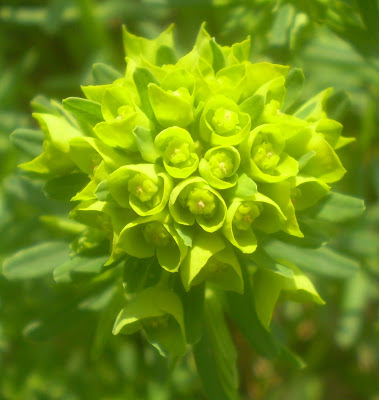 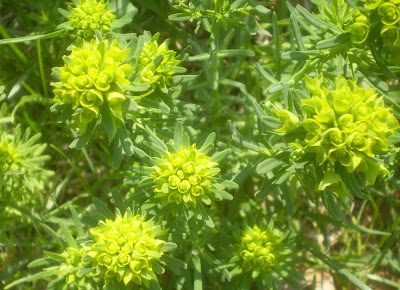 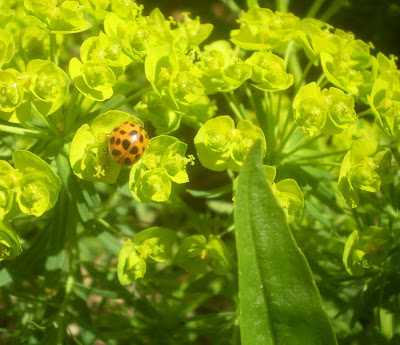 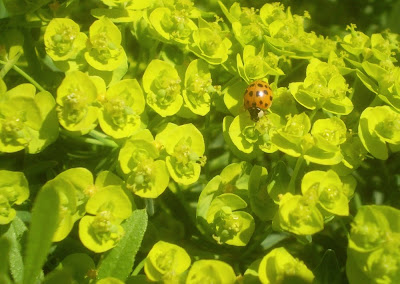 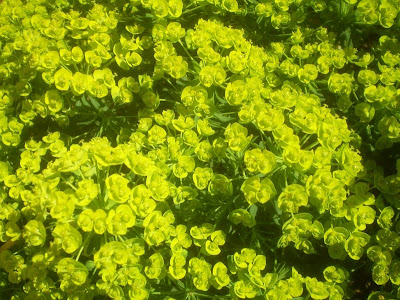 I've been noticing this second plant for years, without having any idea what it was, and I'd actually taken a picture of it recently to post here at PATSP so I could find out. And then a few days ago, I was reading something on-line that was completely unrelated to Iowa weeds (a large collection of information about odors used in perfumery, particularly those from plant sources, and actual structures of the specific chemicals responsible for the various odors, which is information nobody ever includes, so I was in chem nerd heaven -- do check it out), I ran into a picture and mention of something called wild chamomile, which looked just like the plant I'd been noticing for years but had never been able to identify.

Turns out it's Matricaria discoidea. 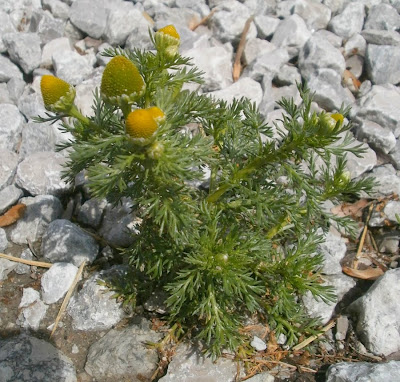 Matricaria is unusual in a number of interesting ways: first, it's one of those plants that is "native" to North America but may not be native to North America. It has historically been found mainly in the U.S. Pacific Northwest and in Northeast Asia, but there is reason to think that it may have been brought over from Asia when humans crossed the Bering Strait and colonized the Americas, between 16,000 and 13,000 years ago, and may not actually be native to North America at all, in the long-term sense. (As we have seen, whether something is "native" to a given area or not depends to some degree on the time frame you're interested in.) 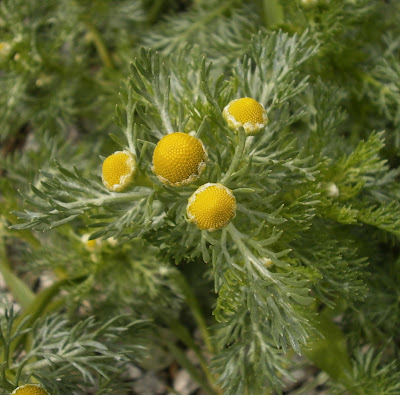 If the pre-Native Americans brought it with them, it was probably deliberate: it has been used medicinally for a number of different things (fever, postpartum anemia, infection, stomach upset), and the plant is also edible. Flowerheads have a pineapple / chamomile odor when crushed, which is responsible for the common name of "pineapple weed." 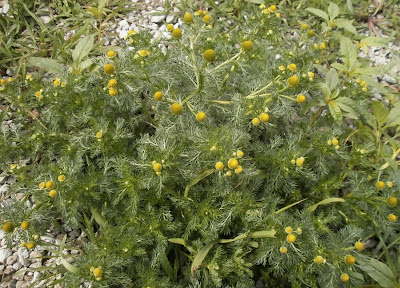 It's also noteworthy for being a successful invasive in Europe, though I don't get the impression that it's a very serious problem -- Matricaria is what is called a "ruderal" species, which means that it's one of the first species to colonize recently disturbed lands. Once other species begin to grow in the area, Matricaria is crowded out and more or less disappears. (Around here, I mostly see it growing in gravel driveways or alleys, where little else will.) 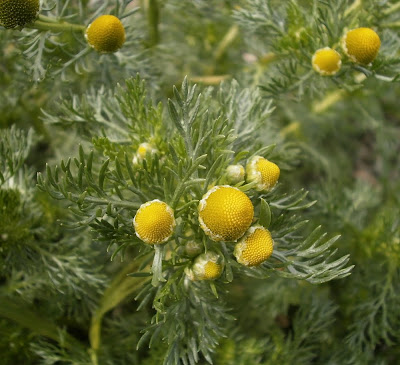 When I found out what it was, I of course had to check the smell out for myself. I can see where the "pineapple" part of the description comes from, but it's a very different type of pineapple smell than something like Salvia elegans. I'm not sure I would have come up with "pineapple" as a descriptive word if I hadn't already known it was called pineapple weed. I haven't been willing to try tasting it yet, partly because some sites warn that the flower heads can be really bitter, and partly because I have no way of knowing what's been sprayed on the plants I find around town.

I always did like the plant, but having a name for it and knowing more about where it comes from makes me like it a lot better.

Looks like cypress spurge, Euphorbia cyparissias. From Europe, and widely naturalized. I wouldn't plant it in the garden, as it spreads like wildfire underground and is impossible to control without herbicide. I see big stands of it while driving the interstate. It's considered ecologically invasive, though it's still widely available for sale, for planting in gardens, and there are cultivars like "Orange Man". Some people will buy anything.

I hadn't realized there were so many species of chamomile.

I haven't seen pineapple weed in years... I do remember it from my childhood in the midwest though. I don't see it in Texas, or at least I haven't noticed it. Maybe it doesn't like our summer heat? I know that Roman and German chamomile suffer in it...

That works for me; E. cyparissias was one of the species I had thought it might be, if not E. esula.

I wasn't planning on planting any, but I have to say, 'Orange Man' is pretty. I mean, I can see why someone would.

I think it probably is the heat; the USDA site shows it as being throughout the U.S. except for parts of the south (TX, AL, GA, FL, HI). Sorta blows my mind a little to find that there's something that's not invasive in Florida or Hawaii.

Every few years, when I have to have gravel added to my lane (I pay to get it spread and then I pay the snowplow driver to throw it hither and yon) I get a nice new spread of pineapple weed. It's cheery, it helps knit the fresh gravel together and it is gone in two or three years. Nice herbal smell when you drive or walk on it.

What you say, Mr. S. is so true - the more you know about a plant, its history, its distribution and its folklore makes it all the more fun to find, identify and possibly plant. Plant nerds have more fun!

It's funny how a plant that is highly invasive in one spot is mildmannered in another. I have two different E. cyparissias types; the standard species, and one called 'Fens Ruby' which has great wine colour in the foliage. Neither has tried to take over the neighbourhood, but I did end up in the emergency dept a few years ago when sap from one splashed in my eye while I was weeding around them.
Pineapple weed grows in our dooryard, and while it irks me by its prodigious weediness, I do like the scent of it.

Matricaria is so weird. I remember seeing it everywhere in London, Ontario growing in gravel parking lots and near soccer fields. It was strange then and it's strange now.

Claude- I live in Austin and I grow (german) chamomile every year. However, it DOES die right about this time every year. You need to catch it sometime between Feb-June.

That stuff is awesome. Aside from human medicine, it's great for plants. A decocotion makes a great antifungal spray for sprouts and nearly eliminates drop off.