We have a very large silver maple (Acer saccharinum) toward the back of our long, narrow yard. Then the neighbors on one side have another silver maple, at the very back of their lot, and the neighbors on the other side have at least one Norway maple (Acer platanoides) in their yard, too, and . . . well, basically what I'm trying to get at is that there are maples everywhere. Our back yard abuts a cornfield, and this picture, from about two weeks ago, was originally intended to illustrate how many maple seedlings come up in it. But then Sheba jumped into the picture and --unusually for her -- sat still, looking all sober and contemplative, so this became a Sheba picture too. 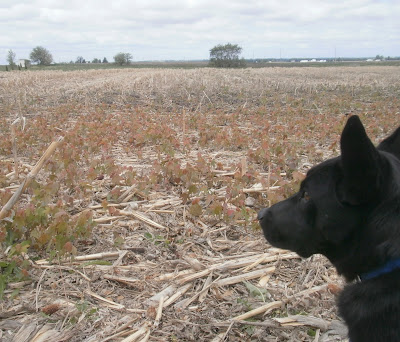 For maximal impact, look at the full-size version of the photo in a separate window.
Though it's still interesting to see just how many maple seedlings there are out there. (Could there be a thousand in that picture alone? It seems like that might be a thousand.) They'll all be Rounded-Up soon, if haven't already been by the time this post goes up. It seems kind of sad in a way -- I like maple trees, even weedy maple trees like saccharinum and platanoides -- but at the same time it's also a little terrifying how many of them there are, and how quickly they all appeared.

I mean, not that I'm saying Hitchcock should have made The Maples instead of The Birds. (M. Night Shyamalan tried that, and people mostly just laughed.) But still. Sinister.

I was thinking about Nina this week. No, really. On Thursday afternoon, I watched in fascinated horror as a black racer stalked and caught a brown anole on a fence.

The anole was about 30" off the ground and thought it was safely out of reach. The snake had other ideas about the situation and without missing a beat shot the upper part of its body straight into the air and grabbed the anole. This was a snake about four feet in overall length mind you. Talk about athleticism.

Anyhow, when Nina stole aboard that shipment of houseplants in Florida, she was no doubt looking for a better life in the great unknown. She harbored vague hopes of a quiet life where she could live her days free from the scourge of predators. Luckily for her, the stars aligned and she ended up in an aquarium in Iowa.

You saved her from the black racers of the world.

Great pic of Sheba. It looks more "composed" than "accidental".

Great photo, but the maple seedlings are a little horrifying, since I have the same issue with a neighbors maple that shades my yard. They are great colonizers in natural ecosystems though.

I love, love, love maple trees. Growing up in central New York big ones surrounds our house. What does the farmer do, just plow them under? The words "Rounded up" kind of made me worry they were going to put the pesticide "Round Up" on them!
You should submit your photo to an animal photo contest somewhere! It is terrific!

Well, yes, I suppose that's true. It's just too bad that Felipe couldn't come too. Pretty sure there's a movie idea in all this somewhere. Maybe some kind of Pixar flick.

This particular batch is very temporary, at least. We find seedlings everywhere, all the time, but the ones in the field we don't have to worry about because whoever owns the field takes care of that for us.

Well, the herbicide is what I meant. I don't know for certain that that's what they'll do, though. They may just plow them under. I'm a little concerned that the seedlings are still in the field, actually -- a lot of the cornfields ringing the town have already been planted and have corn plants a couple inches tall in them already.

Maybe they're not planting corn this year, maybe they just plant later for some reason. I don't remember seeing them plow the field last year, or apply herbicide, so I'm not sure what the timing on any of this will be. But all the maple seedlings are doomed regardless, either by being plowed under or by being poisoned.

i dig up maple seedlings and throw them in pots. Some of them i bonsai, or semi bonsai. ether way
they make great container plants.