A very long time ago, someone at Garden Web asked for suggestions for a tall, narrow plant that would stay narrow, rather than spreading out and becoming vase-shaped with time. The reason was because the person had a fairly limited amount of floor space, and wanted the plant in an entryway, so any plants that got wide would eventually take up too much space and no longer be usable in that spot. I provided a number of suggestions in the thread, which for some reason has become a really reliable source of blog hits ever since. Which is kind of weird. I mean, I wouldn't have thought that many people have this problem.

So anyway. Here's a slightly expanded list of more or less upright, narrow, columnar plants that can be kept indoors. They're not all interchangeable -- you'd still need to be able to provide the right conditions as far as light, temperature, etc. And some of them do actually get a little wider with age. But the list below is at least a place to start, when looking for plants that will become tall but not take up a lot of floor space.

Suggestions are welcome, if readers can think of any other plants that fit the category. 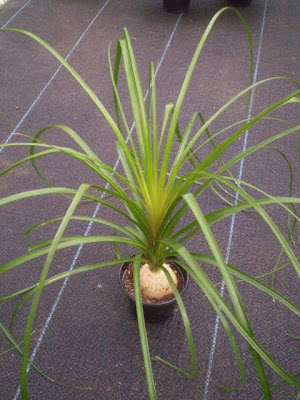 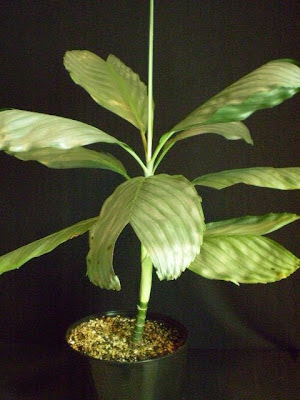 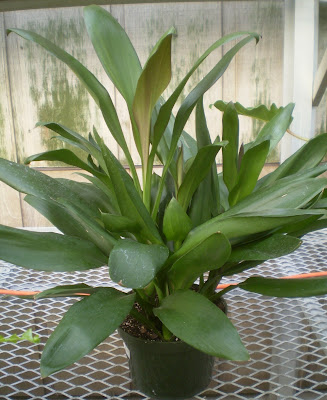 Cordyline glauca, unless cut back. 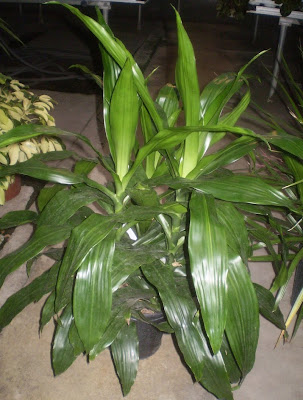 Dracaena deremensis 'Janet Craig' (shown) and other D. deremensis varieties, unless cut back. 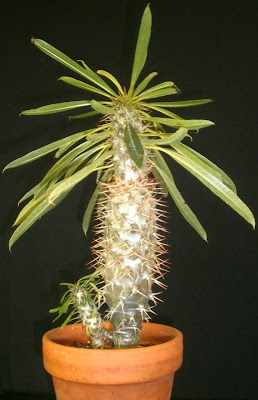 Pachypodium lamerei (shown), P. geayi, and other spp., at least for quite a while when younger. 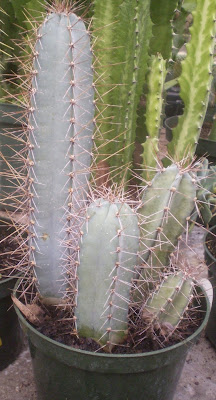 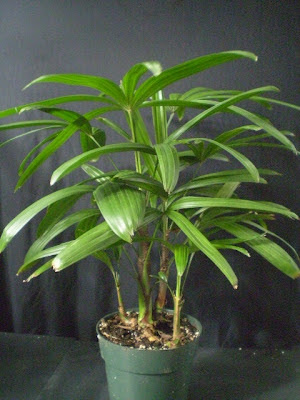 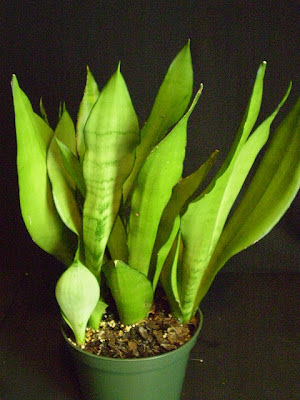 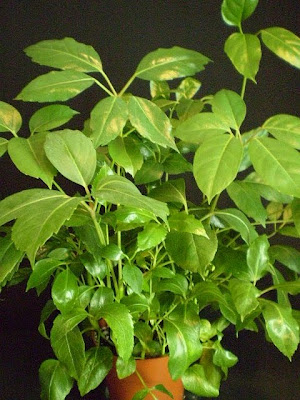 Schefflera actinophylla, unless cut back. Some cvv., e.g. 'Renegade,' have more of a tendency to stay columnar than others.
Of these, my favorite three are probably Dracaena deremensis 'Janet Craig,' Euphorbia trigona, and Pachypodium lamerei.

Dracaena will generally be quite a bit wider than its pot, but it will tend to maintain that width for its entire life, getting maybe a little bit wider at the top with age. If cut back, they will resprout from multiple spots on the stem, making the plant a bit wider, but this takes a very long time to happen and isn't likely to be that big of a deal. They're very tolerant of low light, dry air, and other indoor conditions, but need occasional flushing of the soil with water, because they're somewhat mineral sensitive. They're also easily overwatered, so be sure to only water when the soil is very dry, and when you do water, water thoroughly. Too large of a pot can also cause them problems.

Euphorbia trigona is probably my favorite of the three: it needs very bright light and is easily overwatered, but it is otherwise very easy. As plants age, they will grow new shoots at the stems' corners, which will grow up as well, forming a tall narrow column of stems which is widest in the middle. They will generally need only as much floor space as the pot they're in. The sap is toxic, and may be dangerous to children or pets.

Pachypodium lamerei is of about average difficulty. Like the other two, it's easily overwatered, especially if injured. It needs very bright light and may go dormant during the winter, dropping its leaves and slowing water consumption (this isn't inevitable; my personal plant has never gone completely dormant, as far as I can tell, in the three winters I've had it). It's also more prone to spider mites than the other two, especially during the winter. Very old plants, or plants in very ideal conditions, will branch at the top, though this is not common in plants grown indoors year-round. Pachypodium is also both poisonous and covered in sharp, potentially harmful, spines.

I don't recommend against any of these plants especially, though I personally do poorly with Sansevieria trifasciata and don't intend to buy any more of them for that reason. I think most people have more trouble with Rhapis excelsa.

Now Sanseveria is one of the plants I would call "No Fail". Isnt that strange. My experience of them is that they absolutely thrive on neglect (it is even better to forget to water them than to try and water regularly), and will tolerate bright/dim light, warm/cool positions, draughts and heaters, cramped pots, and even being shifted around to accommodate whenever I decide to alter the furniture around.

I think with Sansevieria and me, the problem is that I soak my plants when I water them now, saturating the rootball, and Sansevieria would prefer that I water more like everybody else waters, small amounts at a time without ever getting the rootball completely wet. At one time, I was able to grow them just fine; watering is the main thing I've changed since then. Even then, they're okay with it during the summer; they just slowly rot out if I do it during the winter too. Which I do.

I think basically the same thing accounts for my inability to do very well with pothos (Epipremnum). On the other hand, I think it may also be why I do better than a lot of people with some plants that are considered more difficult (Stromanthe, Dieffenbachia), so if giving up on Sansevieria and Epipremnum is the price I have to pay, well, that's fine by me.

Great post, mr_s. I've been on the hunt for a tall plant, and this is very helpful. Thanks!

How about Ficus lyrata?

I had Ficus lyrata (and Ficus elastica) in early drafts of the list, but I took them off because older specimens will eventually begin to branch, if conditions are good, and if conditions are bad, they tend to start to lean out to the side. Either way, not quite what I was going for. But yes, in medium-to-short-term situations, Ficus lyrata and elastica would also count.

(Similar logic got me to take off Aglaonema and Dieffenbachia cvv.: they're more or less straight upright when young, but tend to fall over or need to be cut back when older. They'd also fit the list in medium-to-short-term situations.)

What is your opinion on Sansevieria trifasciata ?

I don't understand the question. They don't do well for me, for the reasons I explained a few comments up, but I'm in favor of other people growing them, if they want to.

Polyscias fruticosa - the ming arelia - my experience is they grow straight up. If you want to prune them, they will branch, but mine is staying pretty vertical.

Noted. I had Polyscias spp. in one of the drafts too, and dropped them for reasons I don't actually remember. I have had some issues with a P. fruticosa 'Elegans' flopping over, but most specimens I've met haven't done that.