In October 2008, I traded plants with someone from Garden Web, who gave me three sets of Hoya cuttings: Hoya bella, Hoya carnosa var. holliana, and Hoya picta. Picta only lasted four months before it basically shriveled up and died; carnosa var. holliana looks like it's going to make it, but it's only been actively growing for about six months now; and then we have bella. 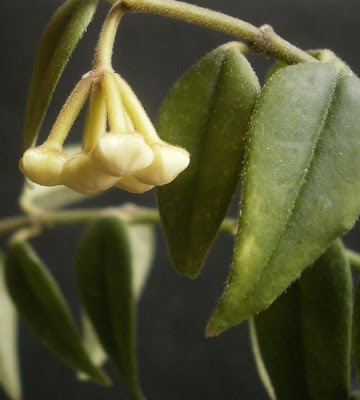 Which has produced two sets of buds at some point in the last couple weeks. I wasn't expecting to see flowers on this plant anytime soon. I have twelve Hoyas total now, some of them dating back to 2006, and only lacunosa has bloomed so far. Which, granted, lacunosa has been enthusiastic enough to kind of make up for the rest of them -- it's been more or less continuously in bloom since mid-January -- but I've learned not to have high expectations. Also these are still very small plants. And yet. 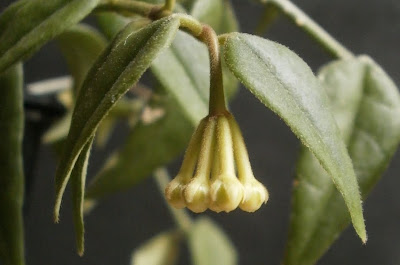 I don't know what the smell will be like, or whether there will be a smell at all -- bella is apparently one of those that may or may not have a scent, depending on unknown factors. If it does, it's supposed to smell like candy (still a pretty broad description: circus peanuts? butterscotch discs? Skittles?). And of course the buds may still drop. If they stay on, though, it'll be interesting to see what it's like. I'll let you know.

As a side-note: this is the last day to vote in the Mouse and Trowel Awards. If you intend to but haven't yet, you should definitely do that nowish.

I think it also smells like the inside of a florist's refrigerator like H.lacunosa. Hoya bella blooms easily and often too. It sometimes will drop a set of buds, but, never fear, more will show up and open. I was afraid all the bud clusters would drop here in AZ with 8% humidity but they didn't. Just don't let the soil get totally dry. They don't like that at all. Also, they seem to like being tight in the pot so you don't have to repot often. How refreshing!

If memory serves the flower spikes on mine weren't perennial like other hoyas, they fell with the flowers. I'd snap them off and float them in a glass globe vase to concentrate the scent. Hope yours are fragrant.