I intended to post something a bit more involved today than just some Iris pictures, but yesterday was by turns frustrating, anxiety-inducing, and miserable, so you will have to accept these as the best I can do for the moment. 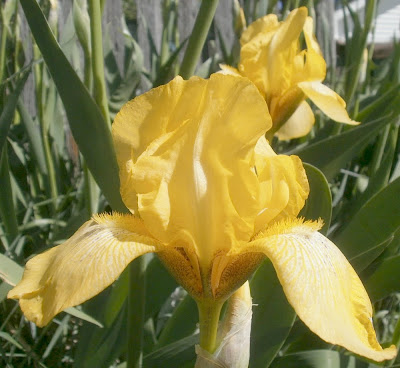 What happened yesterday involves canine diarrhea and is probably best not described in detail, but I didn't get a normal amount of sleep as a result, and then had to spend most of the day on Monday watching Sheba and taking her out every couple hours, just in case. As I write, on Monday afternoon, it all appears to be over, or at least winding down, and she's never thrown up or looked like she was becoming dehydrated or anything, so I guess everything is okay. But, it's also not how I'd planned to spend my Monday, or how I'd want to spend a Monday ever again. I'm beginning to wonder if maybe we shouldn't just bring her in and have them build her a new digestive system. Maybe a gas-electric hybrid. I hear those are hot now.

On the plus side, there was no vomiting. So . . . we're making progress? I think? 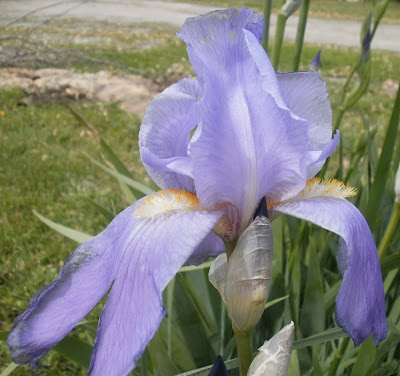 I was already not feeling so hot myself (as mentioned in Sunday's post, I've been feeling really tired and creaky for no discernable reason, the last few days), which missing sleep didn't help, and then I remembered late in the afternoon that I was supposed to have a box of plants arriving in the mail today (plant trade), so I hurried to the post office to get it, and there was a card in the box like they put in there when there's a package waiting, but when I went to the window to pick it up, I was told there wasn't one, or maybe there was one but it wasn't obvious where it was, and the person who would know wasn't around, and possibly had hidden it somewhere, and of course it was also possible that there was never a box in the first place, despite the card, so just come back on Tuesday and maybe there would be a box then. Or maybe there wouldn't! 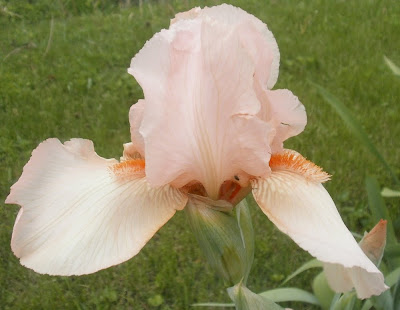 So basically the Post Office is trying to gaslight me,1 as if they're not screwing with me enough by refusing to deliver mail to my home like a normal post office would do.

I'm really fond of that last pink-orange one, incidentally. It's ickily close to Caucasian flesh-color, which I normally really dislike in flowers, but on this particular Iris, it kind of works.

1 (Gaslight is a stunningly handy verb. Even if you're not paranoid, you'd be surprised how many times the situation comes up. The only disadvantage is that successful communication requires the listener to be familiar with the movie, or else the speaker has to have time to explain the word. I'm hoping that if I use it enough, people will become familiar enough with it that I won't have to explain or link to Wikipedia every time.)
Posted by mr_subjunctive at 2:30 AM

Your recent pictures, I assume made with your new camera, are much more vibrant than the ones before! Beautiful!
Sorry to here the dog suffered from diarrhea. Last time one of my dogs told me she had an urgent need to relieve herself due to diarrhea was about 4 am with 18C *frost*. I jumped bare foot in some rubber boots (snow), only dressed my in my jammies and a fleece vest... and ran outside with her. Sigh...

Hope you and the dog start feeling better soon!

Ick, Mr. S., the downside of animal ownership! We were greeted by a large pile of cat vomit just this morning, always a delightful start to the day. I hope Sheba's latest bout is really over now. (Loved the gas-electric bit.) How maddening to be denied your plants! I hope the box had "perishable" written all over it. Grrrr! And I too love the final iris.

The Sheba thing is not done, alas. She woke us both up at about 6:30 AM. The husband took her out, and I didn't have to do anything, but once I was up, I was up, so I'm underslept for the nth conseuctive day.

It still appears to be improving, from what I hear. It's just not over yet.

Poor darlin! Can I tell you a story about the importance of sleep? Haha, you have no choice! Anyway, I dated this NASA guy once, and he told me that he used to have a professor who was convinced that sleep was unnecessary. So he devised a system to test his theory. For six months, he slept seven hours a night. Then the next six months, six hours. Then, five, then four. When he got to sleeping two hours a night, he died. Hahahahaha. I'm sorry, I know, that's wrong. But duh! You think he would've realized somewhere around three hours of sleep that it wasn't doing him much good. Gawd, I love that story.

I'm just saying, sleep is important. I hope you get to nap.

Congratulations on your Mousie wins, mister!

If you find a place to do that gas-electric installation, let me know. I might want one too.

And congratulations on the award wins. I assume a big cash prize?

I have very weird feelings about winning both awards -- either I won over people I know and like, which makes me feel bad, or I won over posts that were all emotional and heartfelt and meaningful with something that was neither (perhaps they all split the sentimental vote four ways). In both cases I kind of feel like a jerk, even if I also feel sort of proud.

Also, now I have to look for Gazania pictures again.

I doubt they're "big" or "cash," but apparently there are prizes. No idea what they are yet.

Hey hey, M&T, congratulations! And don't feel bad/guilty/whatever, they all do their thing, you do your thing, lots of us happen to like your thing, and the award is well deserved.

The whole world of garden blogs is so terrific and a healthy change from some of the garbage that electrons are wasted on and I'm delighted as well to see the huge response that they are gaining for this award. Winner or no, we're all better off for it.

And you can feel the sympathy of all of us who have had the doggie runs to cope with. At night. All seasons. At least it's warm enough in Iowa right now to turn the hose on her if things get really gross. (My lifelong dream has been a house with paved floors, a drain in the corner and a firehose on the wall.)

Oh my, this is tougher than having a baby in the house; at least with babies there are diapers! Hope the poor thing feels better soon, and that you manage to catch up on some sleep!