Nina had a pretty eventful week this week, in that I have finally cleaned up her terarrium. I removed the Stromanthe burle-marxii, which had grown from a single 4-inch (10 cm) tall baby to a monster with eight clumps of leaves that was taking over two-thirds of the tank, divided it, and potted it up into four pots: 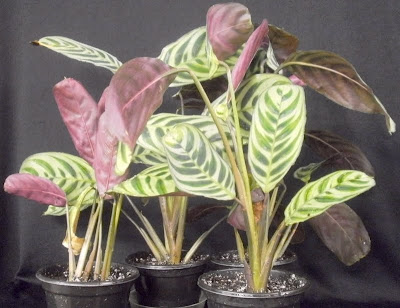 And then I replanted that part of the terrarium with a Peperomia caperata and some rooted cuttings of Pellionia pulchra. None of those were doing that well outside of the terrarium, but I'm hoping the terrarium environment will give them whatever they were missing and they'll be happy.

I left the Vriesea because that's where Nina sleeps sometimes, and it seemed to be doing fine in the tank anyway, without needing any changes.

I didn't take any Before pictures of the terrarium, because, frankly, I was embarrassed by it and didn't want you to see. I do have an After, though the After is also embarrassing in that it looks pretty sparsely planted. I'm hoping the Peperomia will grow tall enough to look appropriate for the space (if it doesn't rot first), and then the Pellionia can do the trailing, ground-cover thing it does. If the Peperomia fails, I have Pilea 'Moon Valley' as a backup, and if the Pellionia fails, I can try Saxifraga stolonifera. 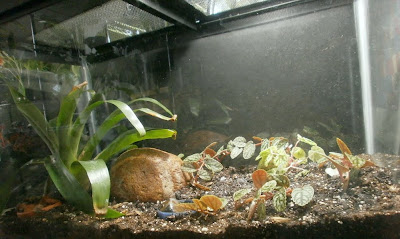 Whether Nina will like this any better or not, I don't know. She wasn't exactly complaining before, and may well have liked the previous version better because it was easier to hide. This is the total feedback I've gotten so far: 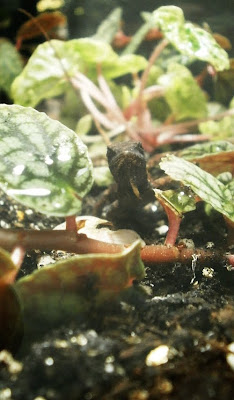 Sheba's week was more typical. We're going on way fewer walks than we were, because I overheat too quickly when we do. Instead we've been playing fetch in the back yard in the mornings, for however long she wants to (usually only 10-20 minutes), which is easier on me because I can stand in the shade. I figure she gets her exercise either way.

That's also the reason why I'm not posting as many pictures of plants from gardens around town: we're not seeing them anymore. This'll probably change again in September or so. Summer is a stupid season.

Anyway. So here's Sheba, taking a break from the fetching in the shade of our maple tree: 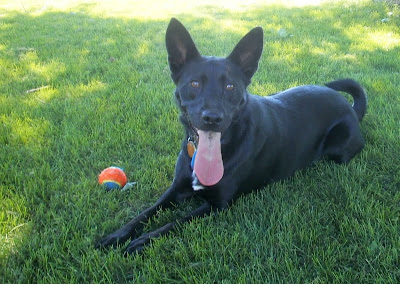 Frederick Law Olmstead (Father of American Landscape architecture, designer of Central Park, yada yada) liked to design parks to not reach their peak until at least 10 years. So give your terrarium some time. I'm sure in a few months it will be flourishing.

I've always liked the idea of terrarium plantings myself. Someday I might start one but when I got rid of my planted fish tank it was amazing how my electricity bill dropped from not having some many lights and machines running. And since I'm a collect student again, money is scarce.

Dear god, is that enormous thing Sheba's tongue? One more reason that I'm a cat person!

But congrats on getting so many plants from your Stromanthe! Between the crickets and Nina, you've got a fertilizer machine going in that terrarium.

quite frankly, nina looks a bit put out... she's got that "I finally got this place the way I wanted it and then YOU come along..." look on her face... but come to think of it, most lizards have some variation of that look all the time, so I can see where it would be hard to read.

And Sheba looks pretty satisfied with her lot in life.

I don't know, but Nina looks a little miffed to me. Still. Her place looks great; before you know it, it'll be a jungle again.

I'm surprised; we estimate that the whole house full of shop lights running 8-16 hours a day is only costing us about $25 a month.

As to the terrarium flourishing or not -- well, yeah, probably it'll be fine. I'm more or less assuming that something's going to get shaded out at some point, though (probably the Pellionia).

Seriously. I actually have pictures where it looks significantly larger than her whole head. It doesn't seem like she should be able to fit the whole thing in her mouth.

I suspect Nina liked the old arrangement better (if she has a preference at all), just because in the new situation the Vriesea is the only good place to sleep, and the crickets (surprisingly large numbers of crickets left, by the way) have completely overrun it. Even when the Peperomia gets bigger, it's not going to be a good place to sleep; the petioles aren't that strong.

A small Ficus would be just the ticket, if there were any that wouldn't outgrow the terrarium in six weeks.

How long would it take a Carludovica to outgrow/rot in the terrarium?

Nina's respose to her new arrangement made me cackle.

Sheba looks supremely pleased with life in general. I also have a rescue dog and I think they know they have it good.

In this terrarium, I'm thinking it'd take about four months. I don't think I've ever seen a Carludovica that wouldn't already stretch from one side to the other; the terrarium is only about 10-11 inches across.

Aww! Who's a happy doggie? Sheba!

Nina does look a bit disgruntled. I recommend Fittonia for terrariums. They love the humidity, and they are kind of halfway between upright and trailing, depending on the cultivar. Also they can be easily cut back without being removed, if they start to take over.

I actually really wanted to get her a Fittonia a long time ago, but I want one of the ones with small leaves and white veins (like the one I killed last summer), and nobody has them! The only Fittonias I've seen since August are the ones with the big huge leaves, or small, red-veined leaves.

What sucks the most is that I'd already sort of promised her that she could have one, and then when I couldn't find them anymore, I had to lie and tell her I wasn't going to get her a Fittonia after all because she'd been bad. So she's probably emotionally scarred now.

You told Nina she wasn't getting a Fittonia because she'd been bad? Shame on you!

Seriously, she'll probably be happier once the plants have grown a bit and she's had time to adjust to her home's new look.

The electricity bill was about $50 (which for me was sky high considering I paid about $10 before the aquarium) so I should have qualified my statement. And as I said, being a REALLY poor college student, $40 was a month's worth of Top Ramen! Also, I wonder how much of that was the heater in the tank. Studies have shown that curling irons and blow driers use up WAY more energy than lights being left on.

I happen to have a Fittonia that has small leaves and white veins! I'd be delighted to send it to Nina. I'll dig it up and ship Monday or Tuesday.