I bought a Polyscias scutellaria in late April. It was a big, gnarled cane that had been planted and shipped out as soon as it started to sprout, which is how a lot of Polyscias are sold at the moment.

When it first came home.
Polyscias canes will usually sprout from several different spots at once, and in the process of getting it situated at home, I broke off one of these sprouts. I didn't want to throw it away, so I filled a clear plastic cup halfway with vermiculite, got it wet, stuck the broken piece in there, taped a second clear plastic cup on top of it, stuck it in the basement close to a fluorescent light, and ignored it for a couple months.

A couple weeks ago, I had a spell where I suddenly felt like everything needed to be up-potted all at once. I checked the cutting, and found this: 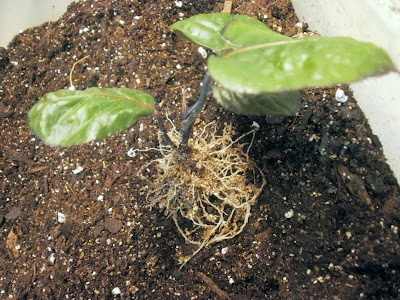 So probably I didn't need to wait quite so long to pot it up.

The parent plant, after a slight repotting (from a 4-inch pot to a 4.5-inch pot), has gone on to produce some serious new growth -- one of the most recent leaves is four inches (10 cm) in diameter. 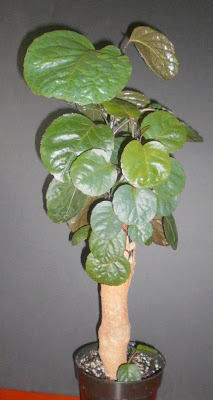 At the moment.
The whole genus Polyscias has been, in my experience, way more agreeable to indoor culture than its drama-queen reputation would suggest. We did sometimes have problems with spider mites on the plants at work, and they'll drop leaves if waterings are missed or excessive, but I was expecting a lot worse. As I write this, I've had a P. fruticosa 'Elegans' for almost two years, and a plain P. fruticosa for about a year and a half. No complaints.

Oh, I love before and after pictures, especially of houseplants. Good work, mr_s!

I'm surprised I haven't tried growing this yet! I'm glad it rooted!

Hmm, so who wins the contest for greenhouse-in-a-cup magic, perlite or vermiculite?

If I could only have one or the other for the rest of my life, I'd go with vermiculite. I'm glad perlite's around when I need to root Ficus, but for most other propagation situations, I prefer vermiculite.

What a great job you have done. This plant looks so healthy under you care. I have heard they are difficult. Bravo!