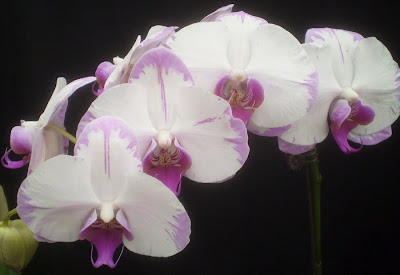 Phalaenopsis1 don't normally do that much for me. Nothing actually wrong with them, but I've seen a lot of them, I've picked up dropped flowers from a lot of them, I've watched quite a few of them die, I've seen a couple produce keiki,2 and by this point I feel like I've pretty much seen everything a Phalaenopsis -- at least the commercially viable ones -- is capable of doing.

This one is not hugely different either, but it's different enough to bother with: I hadn't seen this paint-dipped effect before. Don't know that I particularly like it, but I hadn't seen it before.

It's sort of terrible, by the way, to be an orchid snob already when I've only ever owned seven orchids, two of which are dead.3 I feel like I should have paced myself better, or something.

1 I know, this is Doritaenopsis, but the two names are pretty nearly interchangeable, Doritis being a genus of orchids which some taxonomists consider synonymous with Phalaenopsis anyway.
2 As noted in the Phalaenopsis profile, the word keiki is both singular and plural in the original Hawaiian, so it's respectful, if not required, to use it the same way in English. Not everybody does, so one does see "keikis," and in the grand scheme of things the decision of whether to add an "s" to keiki is trivial, but I try to use it in the original Hawaiian way, both out of respect for the culture and because that way I get to write nitpicky footnotes about formation of plurals. And when I get to write nitpicky footnotes, then we all win.
3 In chronological order: Ludisia (R.I.P.), Dendrobium, Dendrobium, Brassolaeliocattleya, Paphiopedilum, Phalaenopsis, Oncidium (R.I.P.). Though to be fair, the Ludisia stuck around for a long time, and only died because of a bad repotting decision, and the Oncidium was unwell to begin with. So.
Posted by mr_subjunctive at 2:30 AM

Was it Peggy Lee who sang a song, "Is That All there Is?" After getting about 50 various orchids to rebloom indoors on windowsills, I found I was puzzled by all the fuss on the orchid forums. When I realized the orchids were taking up space I would prefer to give my beloved amaryllis, all but 4 orchids were given new homes or tossed. I was bored within two years. Truly jaded. Just awful of me, I know!

I've seen the effect (not in person) on Dendrobiums as well where I think it's even showier than on Phals.

Orchids are like prom queens. Everyone makes a big fuss over them, but there's really not much to like.

You three [and perhaps also you, mr_subjunctive?] must be growing (or looking at) the wrong kinds of orchids, or perhaps just the readily-available mass-produced stuff you get in supermarkets or big-box stores. Perhaps you should go to an orchid show or two...

There are more than 30,000 species and untold hundreds of thousands of hybrids in the world. There are many more shapes and habits,let alone beautiful foliage, that orchids exhibit other than those "Phals & Dends" you are probably used to. Even within the Dendrobiniae there is such a wide variety - this is the largest and most widespread genus in the Orchidaceae - that I can't believe you all haven't seen at least some examples of the variety within the genus.

Many orchids are also grown primarily for their foliage. Many Paphiopedilum plants have the most wonderful foliage, especially those of the Parvisepalum and Brachypetalum sections. Many others have braided leaves, odd-shaped pseudobulbs, weird plant structure AND flower structure, (various Dendrobium species have these last two features...), etc etc.

Variegated and leaf-shape varieties of Neofinetia falcata (the fuukiran as they are called in Japan), or Dendrobium moniliforme with lots of different variegated and growth habit varieties have not been seen that much in North America but the situation is changing.

Species orchids do need more specialized care and many are perhaps not for the beginner in a general sense, but the variety is astonishing.

Do pick up some orchid books or look at some orchid encyclopedias when you have the chance.

I don't think anybody here is unfamiliar with the variety of plants available. Garden Groans said straight up that she's rebloomed about 50 of them; I know Andrew has several of various types. I've got a few, and I've seen many, many more than that.

But I don't find them that rewarding to grow, is the thing. They're expensive, they need somewhat different care than the rest of the plants, they don't look like much when not in bloom (even the one I bought for the foliage, a Paphiopedilum, no longer looks very good, probably because I screwed up and gave it a bad growing medium), and even when one did flower, it was only two flowers, and they only lasted a few weeks. Not worth it to me. Obviously it's different for you. But don't assume that the only reason someone might not be nuts about orchids is because they're unfamiliar with them.

(Should possibly also note that if my orchids were to bloom for me, my feelings about them would probably change. But they're going to have to step up on their own: I'm not about to start giving them even more special care.)

It seemed odd to me that every comment about orchids I've read so far on your blog has been indifferent or dismissive of them. I was curious about it.

BTW, it's not really true that orchids need really special care. They just need the CORRECT conditions, which DO vary depending on the particular plants.

In fact, one operating principle is 'benign neglect'.

It's gone in phases. At first, all the posts were ooo how pretty. Then they were I must have one, at which point I bought a few.

Then the posts turned into ennh, I've seen this before, and now we're at I don't even like them anyway. Some of this also probably has to do with the fact that all the pictures lately were taken and uploaded at the same time, a while ago, so I've literally seen them before, in March when I took the pictures, in July when I uploaded them, and again in October when I wrote the post about them.