I haven't posted one of these in forever, because they're very time-consuming to do, and I wasn't sure if people were really bothering to solve them, and if they did solve them I wasn't sure they, you know, enjoyed solving them. But it's been over a year and a half (the last one was in January 2009), which I think is enough elapsed time for the people who hate crosswords to feel like I'm looking out for their interests and concerns, plus I went to all the trouble of making one so here you go.

I have three more half-finished puzzles somewhere; it may surprise you to learn that actually putting the puzzle together, getting all the words to fit, is actually not the time-consuming part; writing the clues is. So the others will be posted when/if I manage to finish writing the clues. Here's puzzle #3: 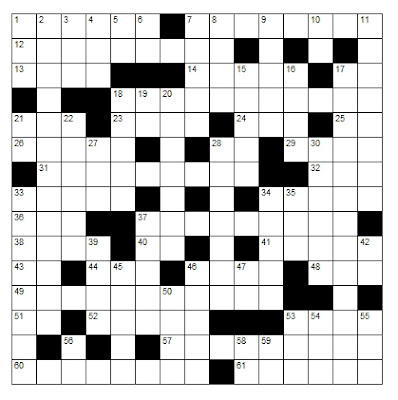 As with the first one, a fair amount of this is site-specific, obscure, or whatever, and may or may not be of interest to you.

I recommend printing out a copy of the puzzle image, and then working on the paper. Sharpie on your computer monitor will also work, but will be more trouble. Googling should prove useful if you're stuck on one, though you know Googling makes you a cheater, right?

Feedback about difficulty is welcome. I will post the solution next Sunday afternoon.

Made with the demo version of Crossword Compiler, as was the first puzzle.

ACROSS
1 Military officer trainee
7 Where baby corn sleeps, or, a place for storing and drying corn
12 The military's favorite green
13 The part of most cacti where photosynthesis happens
14 The longest river in France
17 First and middle initials of Wilson, the creator of sociobiology
18 Women without direction
21 Hillary Rodham Clinton (abbrev.)
23 Popular material for flowerpots
24 Ordinary term for 32 across
25 The country code top-level domain for Spain (analogous to Canada's .ca or Sweden's .se)
26 Boringly stupid, or stupidly boring
28 He around whom the universe revolves
29 Cycas revoluta, for example
31 Fluffy/thorny filler plant
32 Mostly-obsolete, female-specific slang for 24 across
33 Sansevierias are sometimes called _________ plants
34 More than one peen
36 Was television about music
37 A plant adapted for conditions of little or infrequent rainfall, as e.g. Lithops or Crassula
38 LOLCat greeting
40 Outlook Express (abbrev.)
41 Untied, negated
43 They bring good things to life. Or maybe they don't anymore. It's been a while since I saw an ad.
44 Urban slang term meaning disrespect
46 ___________ of endearment
48 Or you can call it Fraxinus
49 They get hot when the sun is out, due to some kind of effect
51 Iowa (postal abbreviation)
52 Secret ______ Man
53 Bryophyllum daigremontianum's profile calls it an ___________ Genius
57 Transparent-topped enclosure for protecting young or small plants in cold climates (Hint: it sounds like it should be a new CBS crime drama)
60 Person who repots
61 Japanese plant torture

DOWN
1 Not sin or tan, but ____
2 Joyweed genus
3 What Gardenias mostly do indoors
4 Electronic voting machine (abbrev.)
5 Tellurium (chemical symbol)
6 South Dakota (postal abbrev.)
7 Annoying but deceased "Battlestar Galactica" character (as of season 4)
8 Woodwind instrument
9 Medical professional
10 Prescription (abbrev.)
11 Poetic flowers, or multiple Mayim Bialik shows [shudder]
15 Music group ______ & Glaciers (they're "post-hardcore," whatever the fuck that is)
16 Even if you kill all the adult pests with one pesticide application, you still have to repeat a few days later to catch any new pests that hatched from these
17 Dizygotheca _______________
18 Plant family names all end in these five letters
19 Interlibrary loan (abbrev.)
20 A kind of monkey
21 Howdy
22 The starchy root of Manihot esculenta (minor spelling variant), or, "house is going" in broken Spanish
27 The three numbers on fertilizer packages in the U.S. stand for the percentages of these elements (chemical symbols)
28 For example, shredded leaves, grass clippings, pieces of bark, newspapers, recycled tires, cocoa hulls, and the others
30 The gay one includes a break for brunch
33 Having worse air quality due to smoke and/or car exhaust
34 Fruits of Prunus domestica
35 Hallow___
37 Denise wanted to know how to care for her plant, ________ (2 words) looked it up on PATSP
39 Concept
42 Measure of water hardness
45 Block of metal
46 S/He's supposed to help you learn
47 _____: Your Brains (HINT: Google "Jonathan Coulton")
50 All at _______ it happened
53 Really short for "Ernest"
54 _______ deferens
55 You could get one made of Plumeria flowers in Honolulu
56 Windows before Vista
58 Initials of actor Woodside, played Principal Woods in "Buffy the Vampire Slayer"
59 ________ shizzle

44 minutes while eating with the other hand and no googling.

Military officer trainees. The other plurals were fine. You could have been crueller and had "Fruit of Prunus domestica".

The clue shouldn't really have the same word as the answer (maize bed? Hammer parts?).

When the answer has two words you should indicate that, most crosswords give the number of letters after the clue for all clues (5,4 for 12 across, 7,4 for 18 across, 4,5 for 57 across despite being pronounced as one word).

That just made it more of a challenge. Thanks for the diversion, I love crosswords.

Fun crossword, Mr. S. I've never laughed so much while doing one. :) I got all except one letter of 2-Down. I didn't think to time myself, but I did it in ink and there are no scribbles. ;)

Pat said, "When the answer has two words you should indicate that, most crosswords give the number of letters after the clue for all clues (5,4 for 12 across, 7,4 for 18 across, 4,5 for 57 across despite being pronounced as one word)."
Actually, no. I've seen plenty of crosswords that didn't indicate that there was more than one word, or if they did, they just said "2 words".

I don't know if I've ever seen puzzles give the number of letters when the clue was for a multiple-word answer. I mean, I believe you, Pat, that it's done, but it hasn't been common in my experience. I do feel bad about not including "(2 words)" everywhere it would have been appropriate, since that is standard in the puzzles I've seen, and I meant to. I'll be more consistent on the next one.

Could be a transatlantic difference, all the crosswords I do have the numbers, even the non-cryptic ones.

The cryptics would be impossible without

Ah, Pat's from the U.K.! That explains it. British-style, a.k.a. cryptic, crosswords always have the number of letters per word after the clue. American-style crosswords generally don't.