On Wednesday this week, I happened to look over at the terrarium and saw Nina doing something I've never seen before: she was hanging on the wall, like she does, but for some reason she wasn't staying stuck. Instead, she was slowly sliding down the wall while at the same time walking back up it, so she wound up walking in place, at a 90-degree angle. (Surely I'm not the only one here who's felt like that.)

She didn't do it for very long before jumping to the ground, but still -- it's been so long since I saw her doing anything new that I was pretty amused by it.

No idea why she would have been sliding in the first place; ordinarily she sticks just fine. Maybe she's dirty? Or the wall is? Or she's too clean? She did just shed her skin recently. 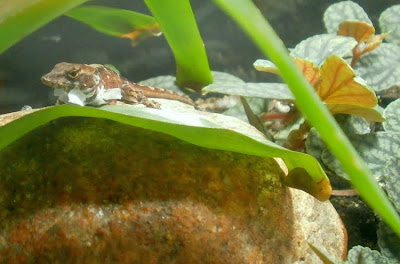 In other Nina-related news, her new plants are filling in surprisingly fast. The Pellionia pulchra is particularly surprising me; it'd gotten along in the living room just fine for a long while, not really growing a lot, but not dying back or complaining either, so I thought maybe they just aren't fast growers. But it turns out that the drier air, or drier soil, or small pot, or something was clearly restraining it, because since I planted those in there, they've been growing like gangbusters.

If gangbusters was a small, fast-growing, trailing plant.

Compare the original shot right after the plants were put in -- 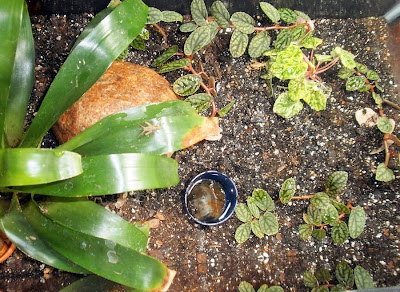 -- to the situation now, only about six weeks later. The Peperomia caperata's not so happy (are they ever?), and the Fittonia seems to still be getting accustomed to the new place: it's filled in a little, though not as much as I'd expected, but the Pellionia's everywhere. And such big new leaves in some places, too! I'd liked Pellionia already, but now I really like it. 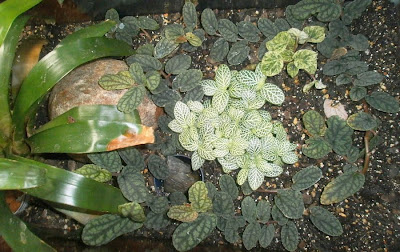 In other other Nina-related news, she bit me yesterday. Granted, I was chasing her around the terrarium, trying to herd her into a more photographable location, so I was being rude.

Didn't hurt. Pretty sure she doesn't have teeth. I've met scarier clothespins. But still: bit me.

Sounds like Nina was doing a moonwalk down the side of her terrarium.

And may I add something to yesterday's post about printing out your own Priority Mail labels? In addition to saving a small amount in postage, the Delivery Confirmation is free.

Perhaps she thought you were a rather large cricket? We used to have salamanders that would definitely mistake our fingers for dinner.

Well, you WERE chasing her around her home, so who can blame her? Nice pics. And pretty amazing how fast those plants are growing. Sounds like they love their home.

Seeing her ex-skin hanging on makes me wonder if it itches, like peeling after a sunburn.

I like how the Fittonia and Pellionia leaves shapes and patterns are so similar but the colors so different. Nice. And I also didn't know that Pellionia grew that fast. Maybe along with the humidity and light, you can factor in the 'organic fertilizer'. I imagine it's fairly high nitrogen.